Those of you who have visited the Frankfurt Motor Show will know that the international event eats shoe leather for breakfast. And as crankandpiston’s own Phil McGovern and James Davison found out, shooting anything and everything is a mightily tall order. 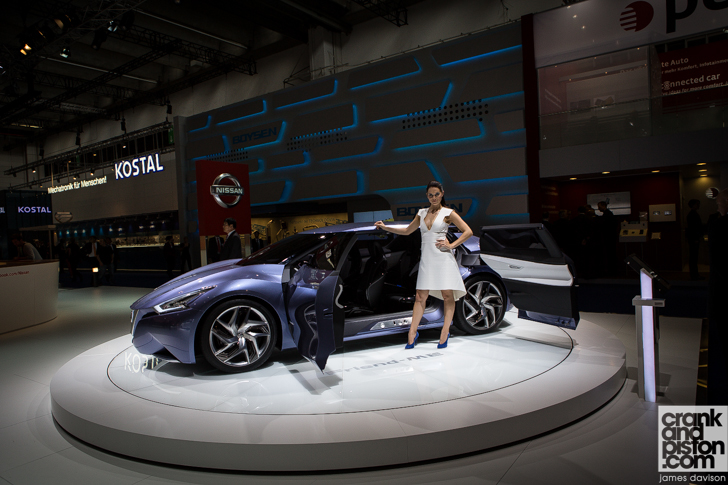 Where better to start than the questionably named Nissan Friend-Me concept, which made its European debut at the 65th Frankfurt Motor Show. Showcasing the company’s future design language, the Friend-Me boasts a V-motion grille, a backlit Nissan badge, new headlamp clusters, five-spoke 20-inch wheels and a floating roof. The big news though – as the name, maybe, suggests – is the cabin, designed to give all-four occupants access to the entertainment system. 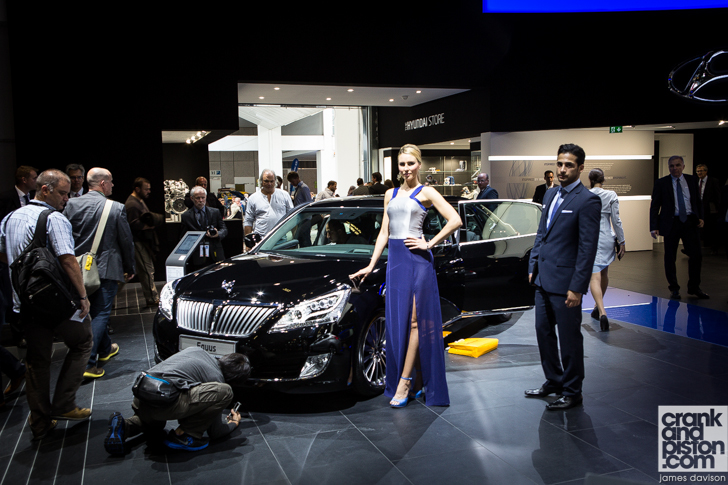 Though the i20 WRC model nabbed the spotlight on Hyundai’s stage, the Korean firm was also showcasing the Equus. Marketed in the Middle East as the Centennial, the luxury model has BMW’s 7 Series, Lexus’ LS, Mercedes-Benz’ S-Class and Audi’s A8 L firmly in its sights (we’ve already pitted the 424bhp 5.0-litre V8 Hyundai against the Audi). As the gentleman looking steadfastly at the front bumper would suggest, the Ce-quus-ntennial is one to keep an eye on. 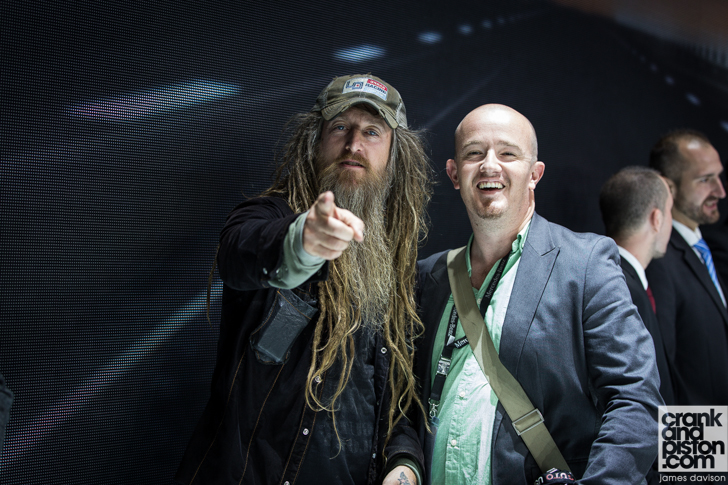 En-route the crankandpiston team stumbled across Porsche legend Magnus Walker. As well as being thrilled to be caught on candid camera, he was pretty happy with his newly acquired crankandpiston stickers. 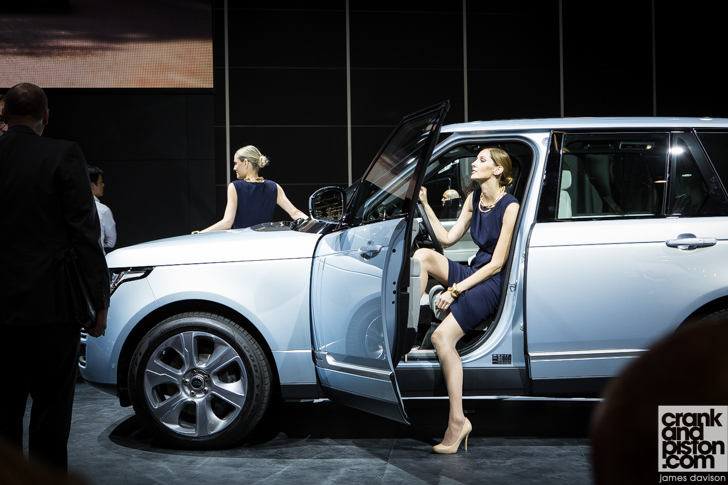 One of the most desired models in Land Rover’s line-up (no, the car), the new Range Rover first set down in the UAE last October, and customers have been slamming deposits down furiously ever since. As well as the fourth gen model, the JLR team also had the new Range Rover Sport (which crankandpiston took for a hoon in Britain on the international launch), the brand new Discovery, the company’s first ever Hybrid Range Rover… 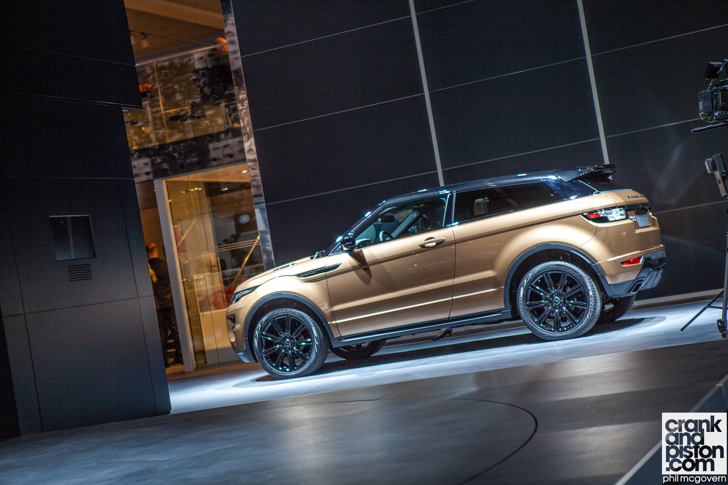 …and the 2014 Evoque on display, which now boasts ‘Active Driveline’ which switches the standard four-wheel drive system to front-wheel drive mode on the move, a new electronic differential and a nine-speed automatic transmission. Those of us who have been waiting for that one vital extra gear can now breathe a sigh of relief. Though in fairness, this has led to an 11.4 percent increase in fuel economy. 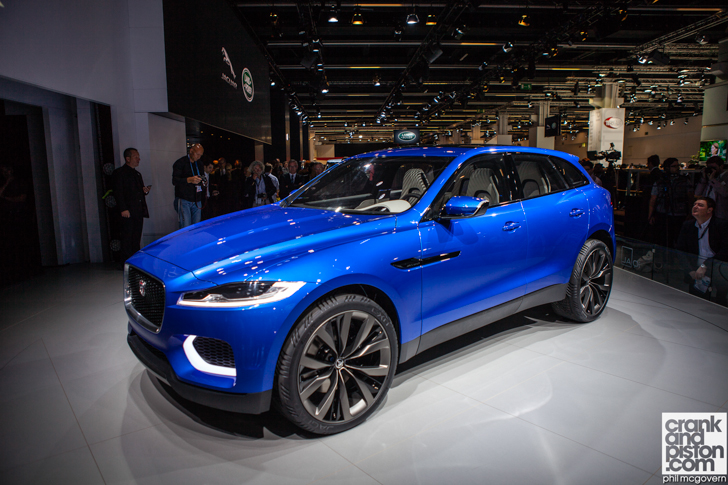 The big news for JLR at Frankfurt though was the brand new Jaguar C-X17, the marque’s first SUV concept. Though few technical details have been confirmed, the new SUV boasts a new ‘highly advanced, modular aluminium architecture’, known internally as iQ[Al]. The rear may look like an F-Type on steroids, but the 23-inch alloys and muscular front end marked the concept as a potential show stealer (though the Cadillac Elmiraj Concept made a fair go of it). 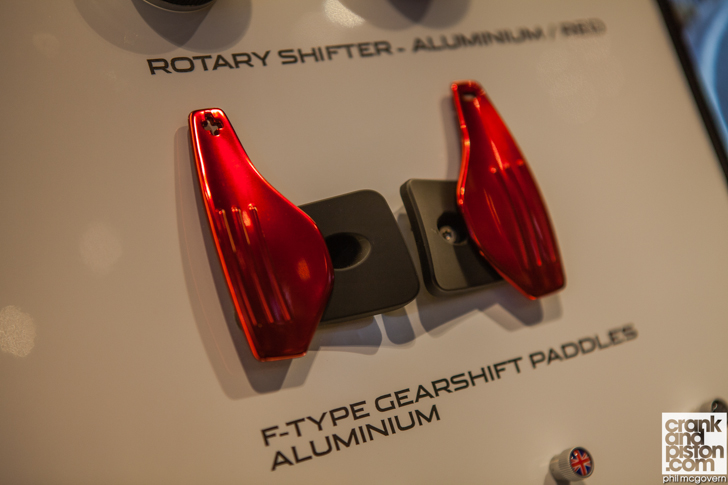 Fortunately, the company also debuted another vital component, namely proper paddle shifters. JLR’s plastic paddles have been commented on in some of our previous pieces, such as the XF 2.0, the XKR-S and the XFR. Good work from the boys and girls in Coventry, and a sigh of relief from the crankandpiston oval office. 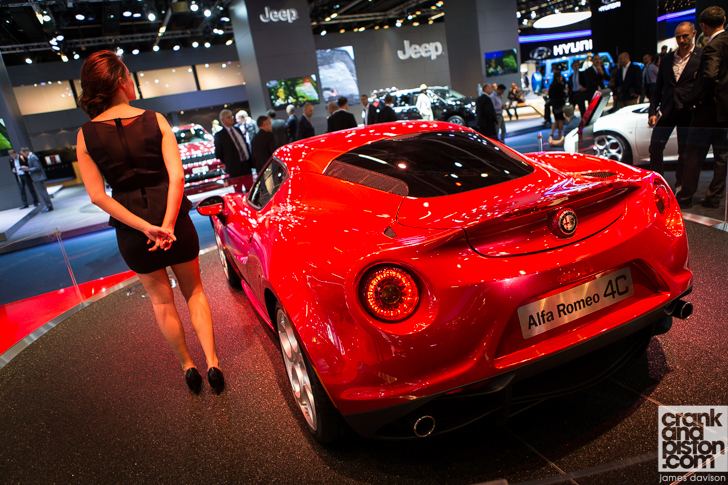 Whilst Phil was drooling over Jaguar’s new SUV, James was on his way to check out Alfa Romeo’s new miniature supercar. Powered by a 237bhp 1.7-litre turbocharged in-line four-cylinder mated to a paddle-shift twin-clutch gearbox (calm down though, performance figures haven’t been confirmed), the 4C boasts a carbon fibre tub that weighs just 52kg and body panels constructed from high-density plastic. As well as oomph, the Italian firm – which is currently working out of Maserati’s facility in Modena – has focused on nimbleness to take on the Lotus Elises of this world.