crankandpiston.com takes to the paddock and pitroad for the season finale of the 2014 Formula 1 season.

Amidst the controversy of Formula 1’s first ever double points paying race, Mercedes AMG Petronas F1 Teammates Lewis Hamilton and Nico Rosberg descended on the season finale at the Yas Marina Circuit with just 17 points separating them. Ahead on points, Hamilton was bested by Rosberg for pole position, but a superior start meant the Brit leapt ahead in the early stages, mechanical problems eventually curtailing Rosberg’s challenge. Hamilton’s victory – his 11th of the season – comfortably secured the title, whilst his teammate could do no better than 14th.

Hamilton is the first Brit to score secure Formula 1 World Championships since Sir Jackie Stewart’s third title reign in 1973 and the first Englishman to do so so since Graham Hill’s second title success in 1968. Interestingly, the six-year gap between Hill’s first title in ’62 and his second in ’68 equals the gap between Hamilton’s first title reign in ’08 and his second. 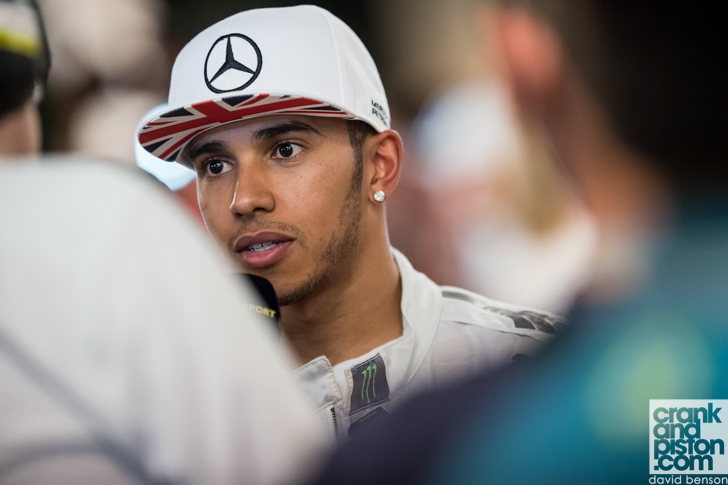 The Abu Dhabi Grand Prix also marked the valedictory races for both Sebastian Vettel and Fernando Alonso at Red Bull Racing and Ferrari respectively. Since his first race with Red Bull in Australia ’09, Vettel notched up 38 victories, 44 pole positions and four consecutive championships, his 1470-day reign bettered only by five-time champion Juan Manual Fangio and seven-time champion Michael Schumacher. Whilst Alonso’s Ferrari career was less fruitful, the two-time champion still secured 11 victories, including his very first race for the Scuderia in Bahrain ’10.

crankandpiston.com was on the ground throughout the weekend to catch the action and enjoy the celebrations as the new champion was crowned.

Previous ArticleThe Volkswagen Golf R Wagon is all the car you’ll ever need
Next Article How to get a car on the world’s tallest building. Ford Mustang