Its gestation has been extensive, but then Porsche isn’t half-baking its first EV – the proof of which is in its all-new interior 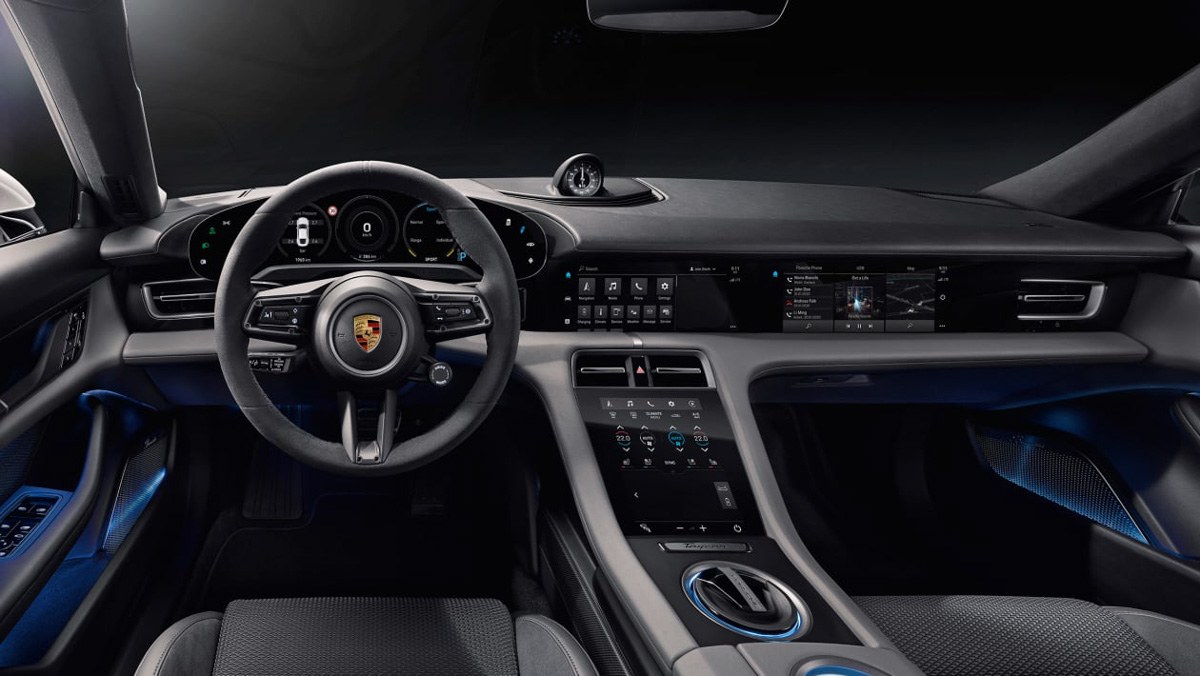 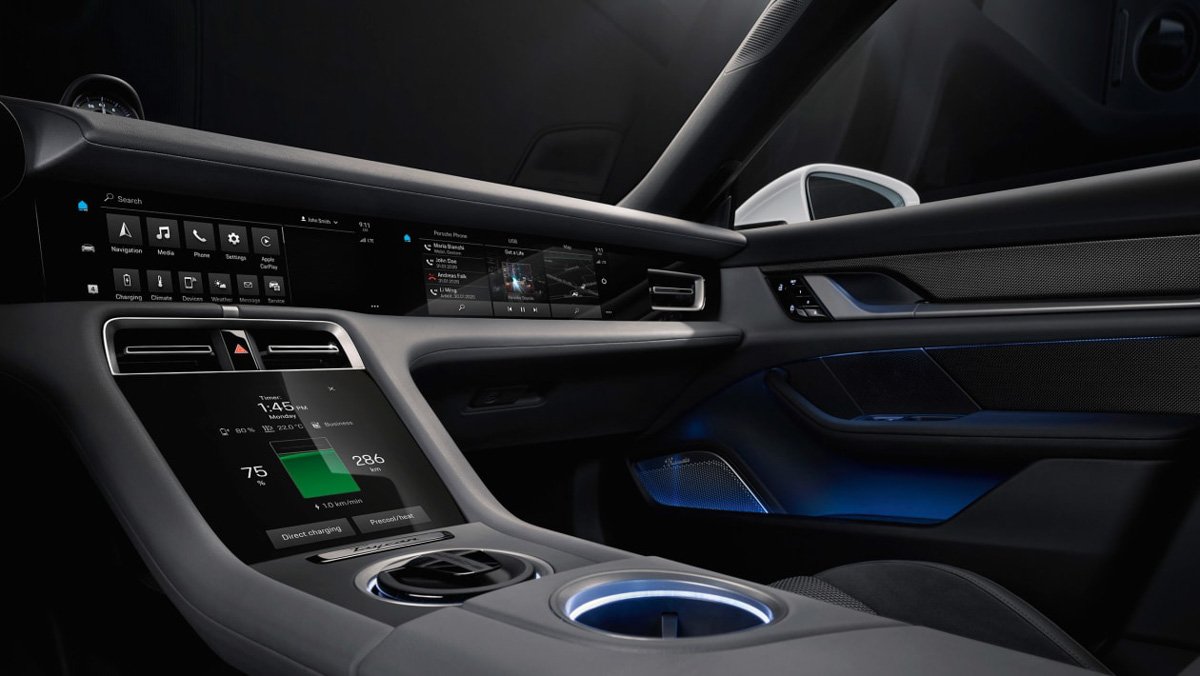 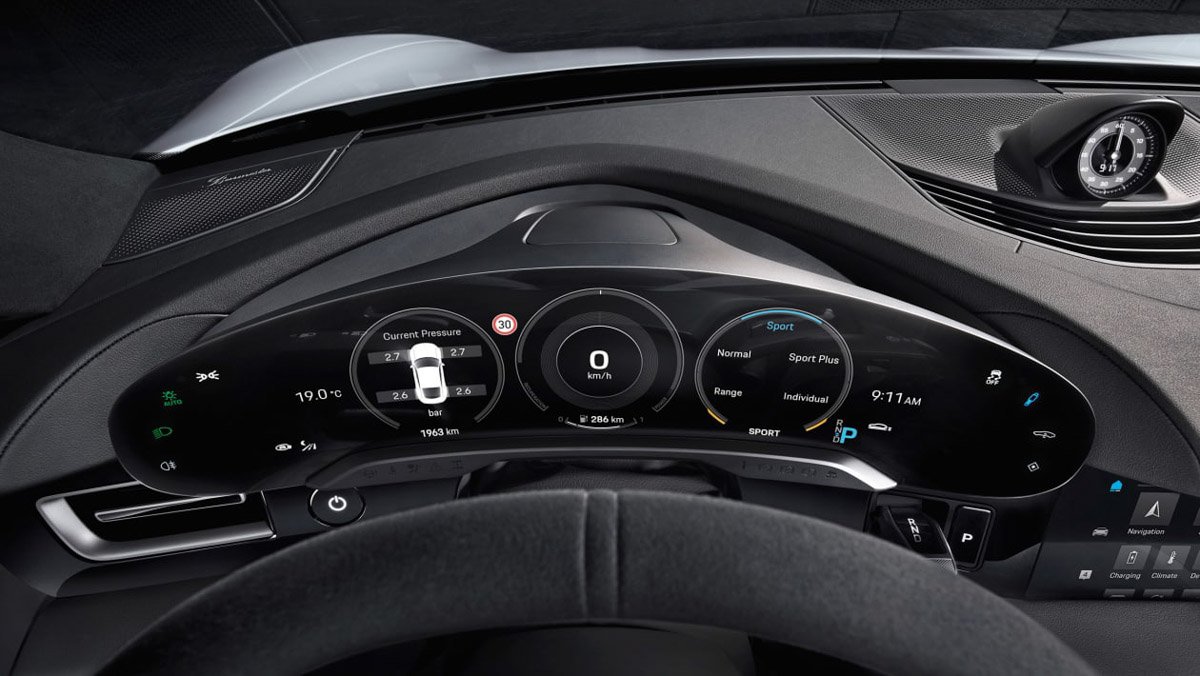 Porsche’s first foray into electric cars is about to come to a front, with the manufacturer almost ready to reveal a look at its battery electric vehicle future. First previewed as the Mission E concept, nearly four years later Porsche’s production Taycan is on the verge of being revealed – to a market more receptive than ever to the notion of a premium electric car.

The first element of the Taycan that has been revealed in full is its bespoke interior. While undeniably Porsche, it’s a design that places more stock in its digital interface than any Porsche before.

But the Taycan not only has its sights set on the industry’s disruptor in the form of the Tesla Model S, but also the luxury car market as a whole, as improvements to infrastructure and greater awareness pull electric cars ever closer to the mainstream. It’ll also eventually spawn derivatives including a Sport Turismo estate and sister model Audi e-tron GT off its bespoke EV platform.

The saloon won’t be the only fully electric offering from Porsche, with the next Macan controversially going electric to rival Audi’s e-tron, Mercedes’ EQC, Tesla’s Model X and Jaguar’s iPace in 2022.

While the Taycan diverges from the Porsche norm in many aspects, the interior has been kept closer to the heartland, as it immediately identifies as a Porsche product.

If there is one crucial element that is missing, it’s the centrally mounted analogue tachometer, but without revs to count (in a traditional sense) Porsche has instead recreated the five rings digitally on a curved, free-standing 16.8-inch glass display. It’s an expensive-looking element that is just the first of multiple digital interfaces.

Next up is the same 10.9-inch infotainment display as found in the recent 911, but with new software to match the Taycan’s BEV capabilities. There is also an optional second 10.9-inch display that sits to the right of the central unit, which will act as a secondary display when the car detects someone is sat in the passenger seat. That screen will otherwise be dimmed, or just display the Taycan logo.

Finally, Porsche’s classic technique of filling the centre console with controls, physical or otherwise, has now been replaced with a third (or fourth if the passenger display is selected) 8.4-inch haptic screen which is mounted in a portrait layout. Rather than show information, this one instead acts as an input device, with static HVAC controls and an active pad below allowing drivers to swipe, prod or type commands into the main 10.9-inch system.

Other than the new digital interfaces, the Taycan’s interior is pure Porsche, with a horizontal dash layout, small and perfectly formed steering wheel and an overall combination of superb build quality and material choice. It’s not as glamorous or ornate as a Panamera, perhaps, but this new wave of minimalism says a lot about Porsche’s future aesthetic.

To create the Porsche Taycan, Porsche started from scratch with the development of a new platform to specifically house the electric motors and battery pack. Under the J1 nomenclature, this platform places its batteries in a skateboard layout with two electric motors – one on each axle – that power all four wheels.

Acting as an electric-propulsion halo model across all of the Volkswagen Group brands, the Taycan is expected to introduce a suite of new technology and user interface tech. In a similar way to the Tesla Model S, the Taycan sits on a chassis with its batteries organised into a thin slab underneath the main body.

Those electric motors together will generate a combined 592bhp power output. Like the Mission E Cross Turismo concept that was revealed at last year’s Geneva motor show, the production Taycan will be able to reach 100kph in under 3.5sec and head on to a 250kph limited top speed.

Like its American rival, the battery position platform gives the Taycan a very low centre of gravity, which should help the electric saloon handle as well as we expect a Porsche to. A trade-off is a high weight figure – a consistent problem with all electric cars that incorporate enough batteries to ensure a high-range figure. Speaking of which, Porsche has quoted a range of around 500 kilometres for the Mission E Cross Turismo concept – a figure also expected to be achievable by the production Taycan.

Despite the freedom that an electric powertrain could offer in terms of packaging and design, Porsche has tried to retain some of the elements found in its more traditional sports cars. According to Robert Meier, complete vehicle model line director for the Taycan, its driving position is ‘almost identical to the 911’s’

The prototypes that have been seen testing, although disguised, show that the production cars will look similar to the initial Mission E Concept. As expected, the form and proportions aren’t quite as dramatic – it’s neither as low nor as sculpted, and the concept’s rear suicide doors have been ditched – but some of the proportions and styling elements are similar. It also shares many attributes with other current Porsche models and it’s hard to deny it looks like a combination of the 911 and the Panamera, while there’s a hint of Cayman in its rear three-quarter view. Recent development cars have featured less camouflage, revealing that the model will feature a 992 911-esque rear light bar, spanning almost its entire width.

Part of the original Mission E Concept’s positive response came directly from a new aesthetic, taking advantage of the new packaging set. Accentuating the fact the Mission E Concept does without a traditional internal combustion engine, Porsche’s designers lowered the front bonnet as much as possible, creating a thin body side, exaggerated by the massive concept car wheels.

The Mission E Cross Turismo clearly follows this theme, but does so in a new estate-like body, much like the Panamera Sport Turismo. Pointing towards a possible future production variant, the Cross Turismo differs from the original concept by adopting normal door openings, rather than the suicide doors of the 2015 concept.

Looking at the test mules, it’s obvious the wild proportions of the concept have been dialled down, but in typical Porsche style hold on to the same basic look. With Porsche’s habit of glacial design evolution, the Mission E should encourage similar design cues in other models in the range.

The inside of the Cross Turismo concept gives us the best idea of what the Taycan’s interior will look like, featuring many near-production elements, such as an airbag-fitted steering wheel and similar switchgear to that seen in current Porsche models.

Recent spy images have also given us a closer look at the model’s braking systems. One prototype can be seen featuring large carbon-ceramic discs and another with smaller steel discs. Due to the need for regenerative braking, systems will be bespoke to the model to allow for maximum efficiency.

By putting the Taycan project into production the German sports car maker is making a significant commitment to the technology, as well as investing $735m at Stuttgart-Zuffenhausen, and creating more than a thousand new jobs. Work on Porsche’s manufacturing facility will create a new paint shop and assembly plant, and changes to the engine factory to accommodate electric propulsion production.

It would be remiss not to note that Porsche’s announcement comes not long after parent company Volkswagen’s scandal over diesel emissions. With VW already promising renewed focus on cleaner methods of propulsion, it seems logical that Porsche would follow suit – though media attention on American firm Tesla has also prompted several manufacturers to take a closer look at electric performance cars.

Importantly, though, Porsche seems determined not to lose its roots in the move toward electric power. ‘We are resolutely taking on the challenge of electric mobility,’ said Oliver Blume, chairman of the Porsche executive board. ‘Even with solely battery-powered sports cars, Porsche is remaining true to its philosophy and offering our customers the sportiest and technologically most sophisticated model in this market segment.’ Watch out, Tesla.