It will have escaped nobody’s notice that a) crankandpiston’s own Phil McGovern is a devout Porsche nut, b) epic photography is crankandpiston’s bread and butter, and c) when there is the opportunity to throw buckets of water at each other throughout the night, we grab it like excited children. This awesome image of our resident Porsche 912 – #project4banger – took three hours just to piece together, let alone shoot. And while it’s tempting to get carried away, I’m going to belt up and let the man who put it all together – photographer Arun M Nair – explain how he did it.

First off, why add water?!

Imagine Emma Watson in a wet dress…I think you get the idea!

I’ve seen other photographers get ‘splashy’ with their shots and really wanted to experiment with the proportions and drama that goes with it. When you add an element like water to a photoshoot, it really brings out the lines and true character of a subject. And with a Porsche, there’s a lot of character.

Fair point. What about the Porsche then? What elements of the design were you hoping to draw out?

I wanted this image to look quite sinister, and that’s why we opted for a night shoot. There’s a much greater contrast between the light and dark aspects of the final image and that creates a really moody look, which I really like.

At the same time though I wanted the finished product to be Wallpaper material: I wanted to shoot 4banger without losing the ‘feel’ of it. The problem is that, even though the 912 is elegant in its own way, the bodywork isn’t very curvaceous and that makes it difficult to create depth. Throw heavy lights onto the bodywork and you could lose the lines altogether. 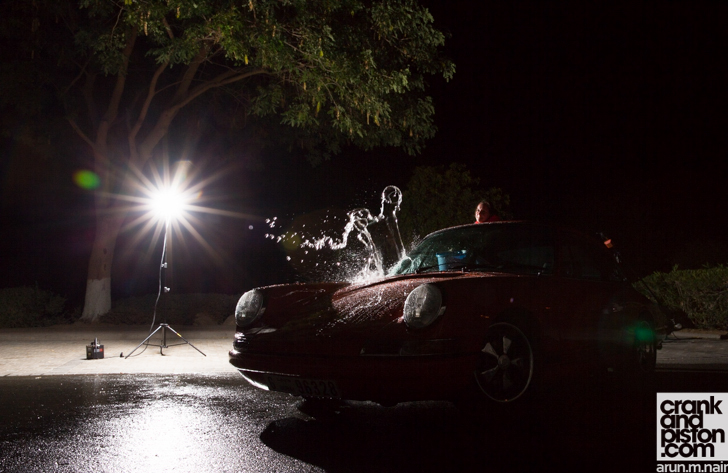 So how do you work around that?

To help with that, I decided to shoot a three-by-four angle from the front. Look at any Porsche from the front and it’s got that classic design, with the undulations of the bumper and those signature headlights. You just know immediately what make of car it is, so it was important to get that right.

Why don’t you walk us through the shoot then: what equipment is needed?; how is it used?; how much help is required?

Probably the most important items – alongside the camera – were the 600w flashes. On one of those we mounted a 1×4 softbox, across the front of which is a thin sheet that dissipates the light as the flash fires. This means we can light the car without throwing unnecessarily aggressive light onto the bodywork: you risk it ‘bouncing’ off and leaving a white mark – a hot spot – on the image if you do that.

So, the first flash lights the car and gives you the Porsche’s overall shape. The second light doesn’t have a softbox attached, and with this – carefully – we bring out the bodylines and the specific details of the bodywork. Fire this light close enough and it produces a shadow, and from that we can outline specific details, like the bonnet lines, the Porsche badge, and the water droplets themselves.

The next stage is quite tricky because now we need to capture the splash made by the droplets as they hit the body panels. This took some time to get right but fortunately Phil and Monja who were helping me didn’t mind running round and getting a bit wet! 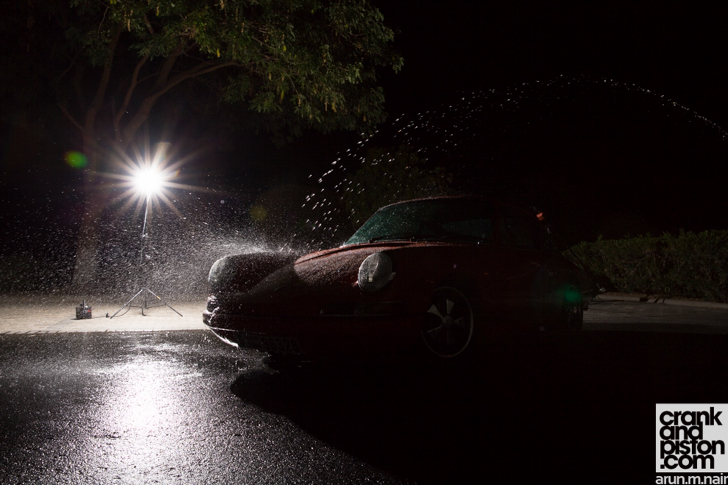 By the sounds of it then we have several separate frames stitched together for this one picture?

Yeah. In fact, there’s 50 frames, or layers, for just this one image. In each frame, the water and light change ever so slightly and the focus is suddenly on a different part of the car: one minute it’s on the headlight and the next it’s on the front bumper. It took about an hour and a half to get all the frames/layers I needed, because you just can’t control the water when it’s in the air. It can take several attempts before it hits the bodywork in the right way.

Plus working in the dark can’t exactly help…

Actually it’s simpler than you might think. In low light, smaller elements like water droplets, flames or dust are much easier to capture with a dark background when the flash fires. There’s no natural sunlight washing them out.

There was a lot of trial and error involved in this shoot but I’ve only been a photographer for two years, and this was the first time I’d introduced water. But you learn a lot from mistakes you make and I think that if I gave this another go I’d be much faster. Two years ago, there’s no way I’d have been ready for a shoot this complicated. 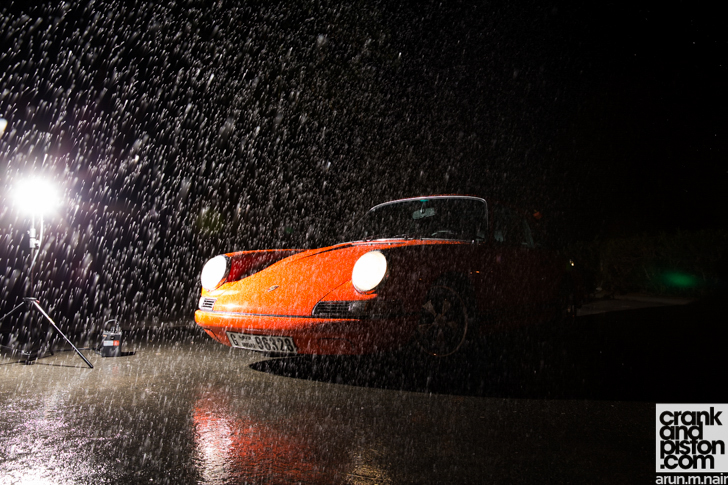 What other considerations do you have for a shoot like this? I can see you’re champing at the bit to say ‘budget’(!) but what else?

Again, not as many as you’d expect. If you have a crew to help, friends or even family, all you need is a water supply and an empty space to position the car: we actually shot this on Phil’s dad’s driveway! The real problem is trying to push as much as you can out of each frame. There’s always more you can get from each shoot. Of course that takes time.

We could have done the same shoot during the afternoon and just used lots of dry ice to create a similar look. The fact that we didn’t though I think is an expression of our visual creativity. We have the freedom to create any , let’s say, unorthodox ideas that flash through our mind. We don’t have any rules. We just know the end result needs to be mind-blowing.

I’ll let you decide if this one is.