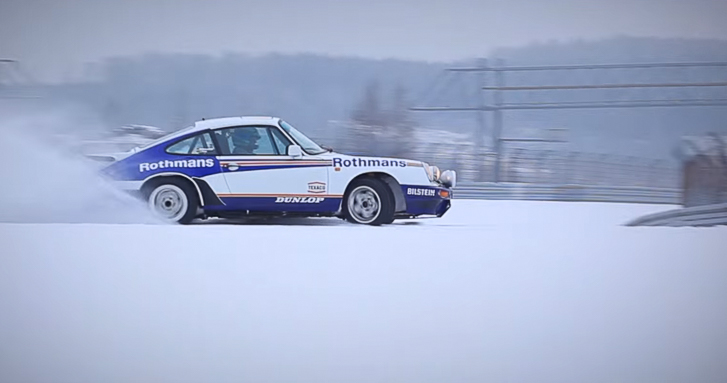 Yep, we’re jealous too. The below is a Group B Rothmans Porsche 911 SC RS being hooned around a snow-clad Nürburgring by track regular Patrick Simon. Though we’re not invited to check out all 22km, plenty of on-board footage and an awesome soundtrack should be enough to keep any of you with a pulse interested for the 5m duration.

One of only 20 examples made, the Rothmans Porsche 911 SC RS was originally a stopgap while the delayed 959 Group B program regained lost steam. Five of these homologated 20 made their way to David Richard’s (at the time) fledgling Prodrive team, with the 1981 World Rally Champion – as co-driver to Ari Vatanen – entering the SC RS in both the ’84 European and inaugural Middle East Rally Championships with Henri Toivonen and Saeed Al Hajiri respectively. Though the late great Toivonen couldn’t quite usurp eventual champion Carlo Capone, Al Hajiri’s Porsche took two Middle East crowns on the bounce in ’84 and ’85.

Built atop the 911 Turbo chassis, though with wide-arch bodywork, the SC RS used the 290hp 3-litre four-cylinder rather than the Carrera’s 3.2-litre unit. Chucking in lightweight aluminium doors and bonnet as well as a five-speed manual gearbox, the rally car would hit 100kph in less than five seconds and top 245kph. All this on an icy Nürburgring. That’s going to need some nuts…

* If you’re now in the mood to see an ’81 ‘Safari’ 911 SC being chucked about the woods, click HERE. Oh, and how about a single seater around a snowy Nürburgring…?