Luke Gilbertson shoots a Porsche 911 GT3 in the famous Leake Street tunnel in London, UK, and finds out what makes it owner Alex Williams’ dream car. 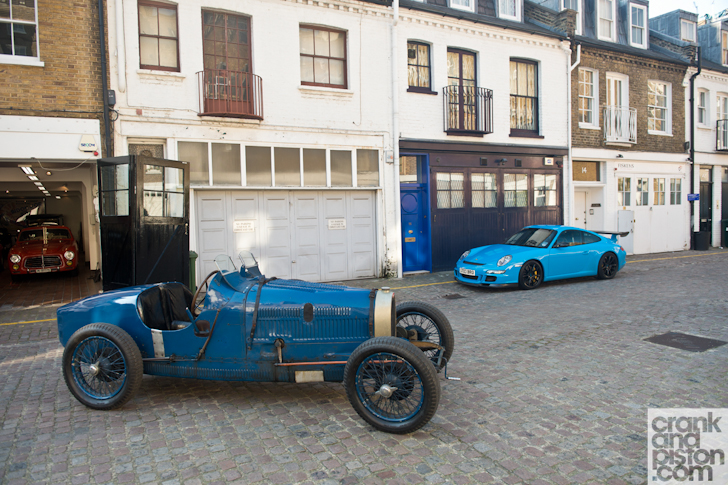 When Alex Williams said he’d let me shoot his Porsche 911 GT3 for crankandpiston, I had my heart set on a mews for the location. An unmistakably London location, both tranquil and secluded, and offered a sharp contrast between the car’s radiant blue and the muted tones of the quaint little houses.

Turns out I didn’t get there early enough. My perfect location was already being used, bizarrely for another photoshoot. I wasn’t too disappointed though since the subject in question was a (very!) old Bugatti Type 37A. As I admired the old master, a very (very!) loud bright blue GT3 rumbled into the top of the mews. 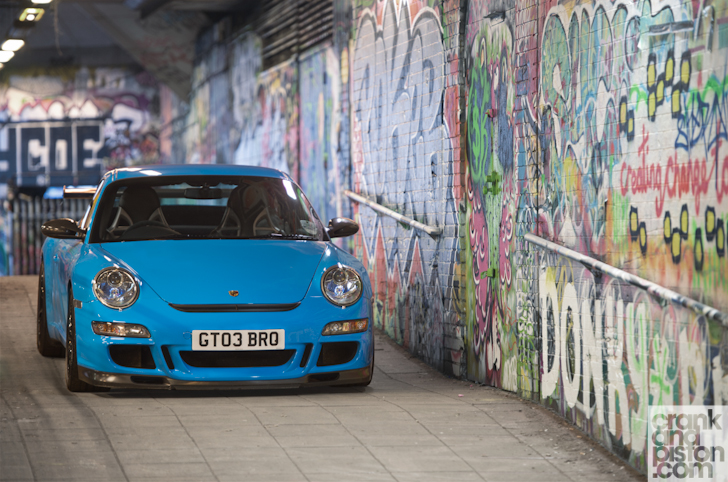 It could only be Alex. His GT3 is no something low-key and subtle. It’s an all-out roadgoing race car. It has edge, and Bugatti or no Bugatti, we needed to find somewhere special to get the right pics. Cue Leake Street in London, a now dead-end tunnel under Waterloo station which has gained quite a bit of fame thanks to the graffiti plastering the walls.

Alex bought the GT3 eight months ago, after scouring the classifieds across the whole of the UK. He didn’t find what he wanted, but he did recall seeing his perfect car a year earlier. He contacted the seller who had withdrawn it from sale.

“Riviera Blue was always my dream colour”, said Alex. “I called the owner, found out it was still available and secured a deal with him. I flew over to Ireland to collect the car within days of making the phone call.” 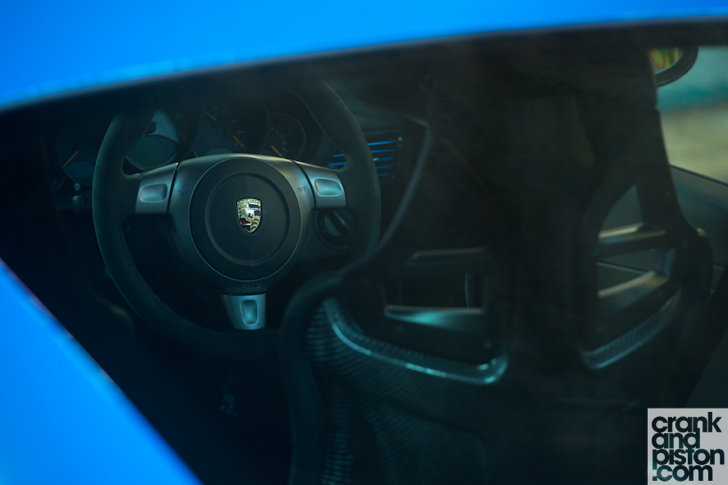 The dream came true, and with extras. One in particular hits home quickly (and the video at the end will account for this), especially since we’re shooting in a tunnel: every time Alex starts the car, the noise is deafening

“The exhaust system completely changed the driving experience of this car because it is a similar setup to the Porsche cup cars. And that’s just one of many mods to the car. There’s a genuine RS Rear Spoiler and boot lid, and a Cargraphic Kit 6 non-resonated full exhaust system. Parr Performance” – a Porsche specialist tuner in Crawley, West Sussex – “has also set the car up for ‘fast road’, which makes a great difference in handling around the streets!” 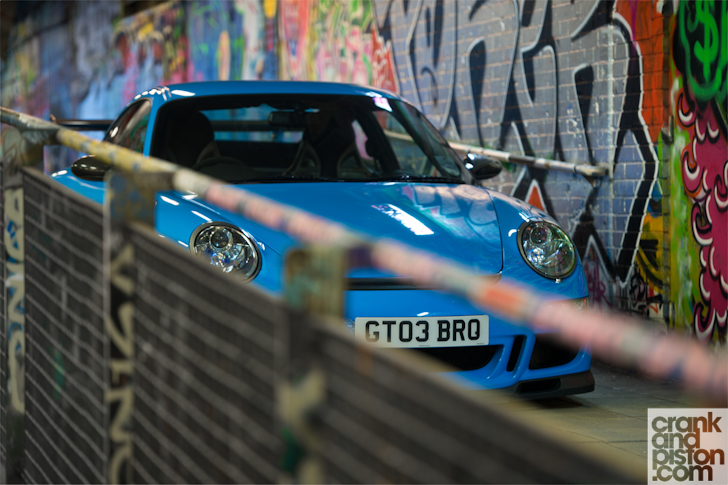 The fact that Alex also lives in Wales, home to some of the greatest driving roads in the UK, gives him ample opportunity to test these factors out. Oddly though, despite being only 24 years old, the Riviera Blue GT3 is not Alex’s first mental car. Previous daily commuters include a Renault Clio V6, a BMW M3 E46 (and subsequently an E92), a Volkswagen Golf R32 Mk5, and an Audi A3. And one other model he holds particularly dear. 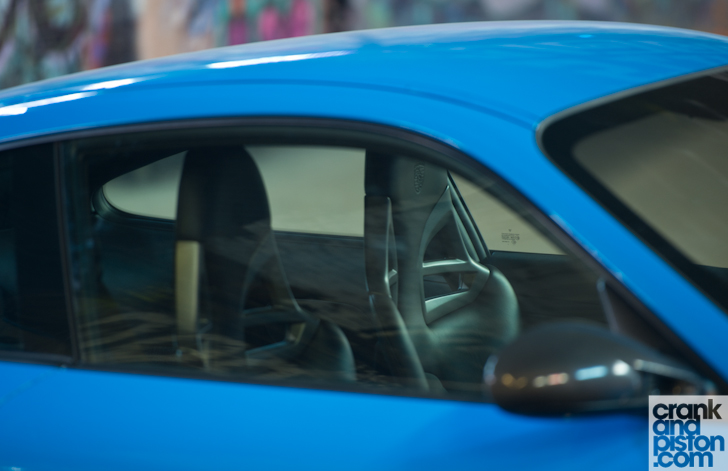 “Petrol runs through my brain! Before I got the GT3, I had a 2008 370hp Audi S3 for three years” – that’s 100bhp+ over standard – “and in terms of modifications on this car, not much was left standard. It’s amazing how much you can change quite a tame vehicle with the right mods and setup.

“To be totally honest though, this GT3 is my dream car to the exact specification. It is the definition of a raw race car for the road. I hop from a 458 Italia which my Dad owns into my GT3 and I feel much more connected to the Porsche. It’s just such a thrill to drive!” 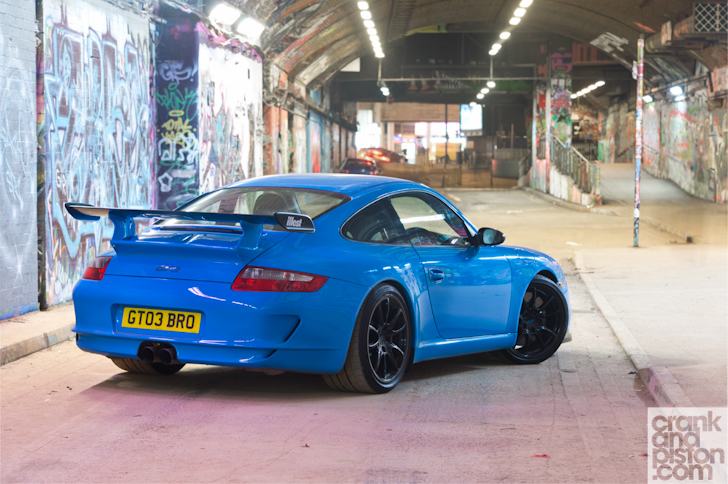 So can anything beat it? Is there anything he’d have instead or alongside?

“I will find it hard to move forwards from here. The only thing I would love to own after this car would be a Porsche 911 GT2 RS or a RS 4.0. I’d consider a Ferrari 360 Challenge Stradale or a 430 Scuderia, but I see myself sticking with Porsche for quite some time.”

Very much living for the moment and enjoying every second behind the wheel, I’m envious of Alex as we wrap up the shoot. And I don’t mind telling him with a smile, much to his amusement. I hope to see Alex and the GT3 back in London at some point this year. And even if he doesn’t phone ahead, with that exhaust pipe, I think I’ll get the message.