The move from naturally aspirated engines to turbocharging left Porsche purists up in arms. Avid Boxster fan Luca drives the new 718 to see if the magic is still there

I love the Porsche Boxster. When the first generation – the 986 – was born in 1996, everyone looked at it as the Porsche fans could buy if they could not afford a ‘real one’, aka the 911. At that time there was no Panamera, Cayenne, Cayman and no Macan. There were no diesel Porsches and no hybrid engines, meaning the only direct comparison was the mature, iconic Carrera.

The difference though was not just with the looks, the straight-line performance or even the price. For starters, the Boxster had the engine in the middle, a revolution in itself and quite a big difference to the all-rear bias of the Carrera 911, well known at the time for being a widow maker if not driven properly. The Boxster turned out to be a fantastic driving machine, proving more forgiving with its immediate and direct handling, and, in some cases, even faster than big sister 911.

I loved the Boxster concept so much, I actually bought one in 2006, a 987 generation complete with 3.2-litre flat-six and a manual gearbox. It was precise, honest and quick, and I’ve always felt it was the best chassis I’ve ever driven: I still remember the feeling of the front end communicating with the rear, going through my butt. Fortunately this latest version, the 718, has kept the fundamentals of what made the Boxster a great driving machine.

A lot has changed in a decade, meaning Porsche’s ‘baby’ is now more mature. It feels bigger, particularly the inside where influence from the 911 and the Cayman can be felt with a more sober and functional centre console. And once again, the designers have done a great job with the ergonomic switchgear, with everything very easy to find and use without hassle. I’m also pleased to see that the usual great looking central rev counter is still in the centre of the dashboard. I personally liked the clean 918 Spyder-inspired steering wheel fitted to our test model, with a German interpretation of the ‘Manettino’ rotary dial.

But how does it handle?

I’ll refrain from keeping you in suspense, and will just say this: this new 718 is terrific in pretty much every aspect. The steering is as direct as you could ask for, though I will admit, after the opening few kilometres, the electric intervention of the new steering setup is more evident than the old hydraulic one. Driver input is very similar but overall feedback could be even racier, in my opinion.

No such concerns with the balance. The body turns into corners at the speed of light, and while the back end can feel a bit lively mid-corner, it will refuse to snap if constant throttle is applied (though just be mindful of mid-corner lift). Without traction control and stability management, you can really start making the 718 rotate into a drift by trial-braking on corner entry. You can also carry mind-blowing speed in slow and fast corners, and still have margin for corrections: even if feedback could be improved, the chassis and steering telegraph the body’s movements as very few cars can offer today. Trust Porsche to offer a modern sports car that doesn’t feel like the electronics are doing all the work. For me, this adds great value.

Probably the 718’s biggest sticking point is THAT engine. In S configuration, power is up to 345bhp, a good 72bhp more than my old naturally aspirated 987 S. Another miracle of modernity: we are talking about a 2.5-litre turbocharged four-cylinder that replaces an acclaimed 3.2 naturally aspirated flat-six. One, I might add, that pushes relentlessly from 2,000rpm to a whopping 7,200rpm, and given that 310lb ft-worth of torque is available immediately, there is no feel of turbo lag at all. Torque and power distribution is particularly linear, which makes the car more usable and definitely faster than the previous generations. Much as I loved my 987 gen Boxster, the new 718 is cheaper to run, fuel consumption is lower, masses are smaller, and C02 levels are down too.

But here’s my problem. Porsche boxer engines have developed their own particular character over the last 40 years. Acceleration from them has always been strong and progressive until about 5,000 rpm, whereupon the torque kicks back in to produce pure excitement up to around 7,000rpm and over. There was this rush, a distinct change in soundtrack, and a sense of occasion. When heavy on the throttle in the 718, I was waiting for that threshold to enter the sport Porsche world after 5,000rpm. And I kept waiting. And waiting.

Call me romantic, but this has been the character of Porsche engines for four decades and it’s something people fell in love with for generations. Much as James would like to say otherwise, for me, this detail has disappeared. If anything the new engine is too good, too perfect, too efficient, and too usable to be able to deliver this thrill of the old naturally aspirated boxer flat-six. Don’t get me wrong, if I had never driven or owned a Porsche before, I’d find this machine and its engine a treasure in all aspects. Having owned a ‘proper’ Boxster for nearly 30 years though, I still miss that but unfortunately I did for nearly thirty years and I miss that ‘5000rpm’ drama in these new civilized turbo engines.

It’s difficult to be too harsh about the new 718 Boxster S though. It’s an insanely fun machine to drive, given its well-balanced chassis and very direct steering. For a car that was born to be a convertible, and inspired by the legendary 550 Spyder no less, the attention to driving has never dropped, and in fact has become the main focus in its 20 years lifespan. However, I can’t help but wish that Porsche, with its new turbocharged era, had kept a little more of the purity and simplicity with its Boxster DNA, focusing less on electronics and weight-saving, and I would also have liked to feel the same electric-like buzz going through my seats when front and back axle of the car are in communication. Ask me again in 30 years though. Maybe I’ll have ended up buying a 718 by then too…

You can find more Porsche stories HERE, and more of our Car Reviews HERE 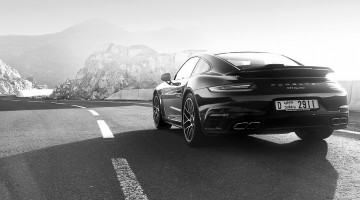