Look out LaFerrari, Pagani has released images of a lightweight, more powerful limited edition Huayra, the BC. Named in honour of the company’s first ever customer – Italian property magnate Benny Caiola – only 20 examples of the Huayra BC will be produced at €2.35 million ($2.6 million) a pop, apparently. Pagani insists though that the new Huayra BC is more than just ‘a restyling’, and instead draws inspiration from track-focused predecessors like the Zonda R and Zonda Cinque.

The 6-litre twin-turbocharged V12 from Mercedes-AMG remains beneath the revised bodywork, but thanks to a retune, power has been upped 59bhp to a massive 778bhp. Up to 811lb ft of torque is sent to the rear wheels, while the V12 is mated to a seven-speed manual transmission.

Of perhaps more significance though is the aerodynamics and weight saving. As well as a new front splitter and a larger rear wing, at 1218kg the BC drops 132kg and several belt loops thanks to new components being 25% lighter than those on the regular Huayra. The new BC runs new lightweight wheels – 20in up front, 21in at the rear – shod with Pirelli P Zero Corsa performance rubber, though special Trofeo R track tyres are also available as an option.

New suspension components have been milled from lightweight aluminum alloy, Brembo carbon-ceramic brakes further increase the stopping power, while a new electronic active differential allows the car to adapt to different road surfaces and conditions, increasing maneuverability as a result. Inside the stripped out cabin lies a new electronic parking brake and suede-leather trimmed steering wheel.

Of further interest is Pagani’s claim that the Huyra BC is ‘the most technologically advanced Huayra Coupé yet’, as evidenced by all new tripod axle drive shafts derived from Le Mans prototypes. The Italian marque has also foregone the hybrid route emphasized by the similarly powered LaFerrari, McLaren P1 and Porsche 918 Spyder in favour of chassis and suspension developments as well as a new automated manual transmission to create the ‘lightest, globally homologated, hypercar’.

Quite a tribute indeed Signor Caiola… 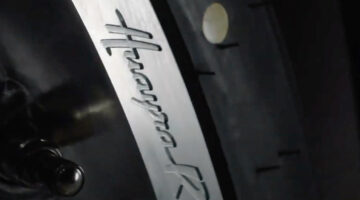