A new limited-edition long-tail version of the Pagani Huayra has been announced. Known as the Pagani Huayra Codalunga, only five examples will be produced and all have already been sold to prospective clients for $7,000,000 each.

The long-tail Codalunga is based on the standard Huayra coupe and was born out of a client-manufacturer collaboration dating back to 2018. Headed by Pagani’s Pagani Grandi Complicazioni specialist vehicles division, the Codalunga project was undertaken after a request from two Pagani collectors. These clients wanted a longtail version that evoked some of the most iconic shapes of race cars from the 1960s, which were famously designed to decrease drag and improve aerodynamic efficiency.

Pagani’s 828bhp V12 engine capable of 811lb ft of torque sits concealed underneath the Codalunga’s vast engine cover, which is 360 mm longer than that of the standard car. The elongated shape gives a breathtaking new silhouette to the car which tapers off towards the rear.

The ethos for the Huayra Codalunga is ‘less is more’, so despite its increased length, the limited-edition supercar weighs in at just 1,280kg – less than the standard Huayra’s 1,350kg but heavier than the more focussed Huayra BC’s 1,218kg. At the rear of the Codalunga there’s no grille, giving a more minimalist look that exposes Pagani’s trademark titanium quad-exhaust that weighs in at just 4.4kg.

The paint palette for the Huayra Codalunga is described by Pagani as neutral, evoking “shades of the past to bring out the simplicity of the car’s design” and semi-matte and matte finishes are offered.

Exposed carbon fibre also works to highlight the car’s simplicity on the inside, but that’s not to say the interior is at all spartan. On the contrary, woven aged suede leathers adorn the cabin giving the luxury edge befitting an exclusive supercar. 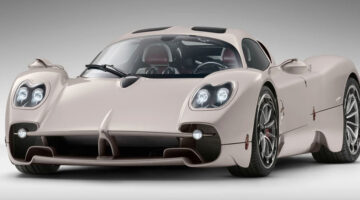