Our Long Drive Home. On edge. UK to Australia

Mike, Jess and their 2004 Renault Clio continue their Mongol Rally adventure, taking in stunning scenary, threats of a five-day waiting period at border control, and lunch in a mud house.

When we woke up in Semey we were happy to find that another Mongol Rally car was parked up next to ours, and the owners had exactly the same plan as us: get across the border. We didn’t have a map for Kazakhstan so they were happy to let us follow them over to Russia.

A nice easy border crossing into Russia and those fantastic Russian roads meant that we were making great time and before we knew it, we were in the almost Alpine town of Barnaul. We treated ourselves to one last hotel with Wifi and hot showers, and before we head off to the unknown of Mongolia.

Despite our late arrival into Barnaul and very early start the next morning, Jess is still full of energy and raring to hit the road every morning. Now its not that I’m losing enthusiasm for our long drive home, but as the weeks clock up, I am wishing more and more for an extra hour under the duvet. However, a quick shower and three coffees later, our Renault Clio was en-route to the Mongolian border. 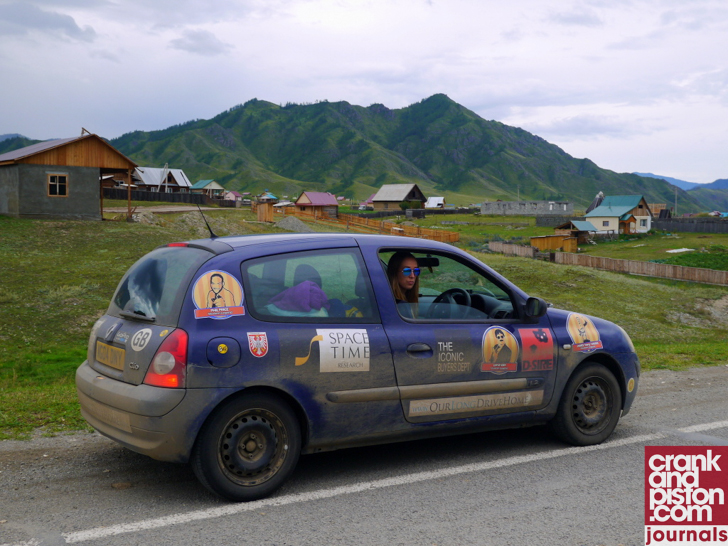 Today was always going to be a big day with over 500 miles to cover from Barnaul to the Mongolian border. Fortunately for us the Russian roads were of a fine standard. More importantly, the scenery was some of the best we have seen yet, and we remained in high spirits. Beautiful winding roads hugged the snow-topped mountains as we followed the rivers higher and higher. We passed cute little tourist mountain towns where people were kayaking and white water rafting, and shepherds were herding flocks of cattle. It warmed our hearts as we stopped to change drivers and treat ourselves to a pot noodle.

It was a long drive, and it had already gone 10pm by the time we made it to the border. Which, unfortunately for us, had already closed and would not re-open until 9am the following morning. We sought refuge with a local family, but would be in for a shock in the morning.

Possibly five days at the border. An absolute minimum of two. Those were the warnings we had been told by other travelers the closer we edged towards the Mongolian border. So we prepared ourselves as best we could, ready to sleep in the car and with a decent supply of pot noodles and chocolate on standby. At the border, we were told that a outbreak of Foot and Mouth disease had occurred and they were obviously taking the necessary precautions with any cars that came in or out. Hence the nice lady who attended us wearing a white quarantine outfit and holding a big hose. We were also told to avoid eating Marmot, a local rodent, since they contain strains of the Black Plague. Who knows what to believe when it comes to Mongolia?

So we edged past the NASA scientist and her hose, and headed into border control. We again deployed the trick of letting Jess to do all the car registration, hoping they would take pity and go easy on us. A gentleman who had been waiting at the border for five days – and who got so annoyed he started a fight with the Mongolian police on patrol – was less than thrilled about that. Finally Jess returned. Three hours. A meager three hours and we were through. Jess had worked her magic again. Or I should her legs had.

Entering Mongolia we knew it was going to be different to anywhere we’d been yet. The roads were just well worn tracks that went straight through fields, the few buildings dotted around either mud huts or beautiful white Yerts. Yaks were on the roads this time, as were hundreds of un-shepherded goats. We stopped at the first petrol pump we found to ask directions and get our bearings, despite having a compass: there aren’t many main dirty tracks in Mongolia.

The petrol owner’s friend came over to pass the time of day, asking – out of nowhere – if we were hungry, which we were. Before we knew it, we were tailing his motorbike into the village. Stopping at his house we were instantly swarmed with local children, most of whom knew that most Mongol rally teams bring toys for the local kids. But they were so cute I let my cynicism pass and could help enjoy the company of our new friends. Inside their beautifully decorated mud house we were offered a series of local dishes: from warm cows milk to little bread dumplings with a sweet butter; little biscuits to some local sour cheese. Nothing at all as gruesome as the bull’s testicles soup that we had been warned about. 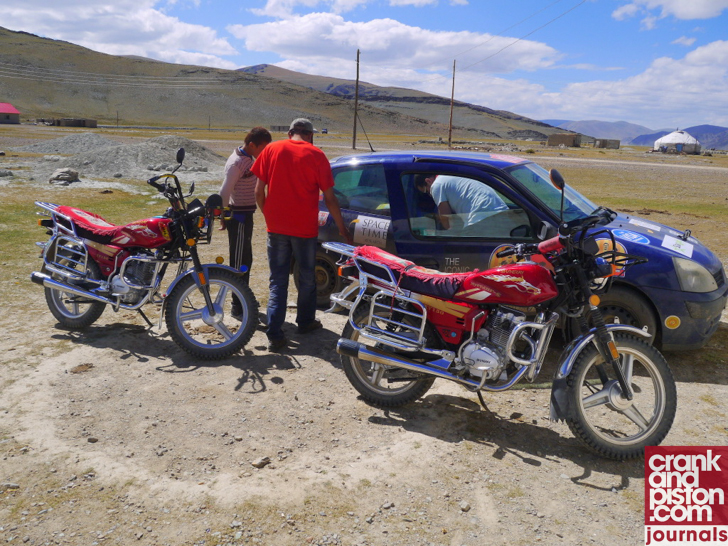 After giving the kids some sweets and little toys, we bid our new friends farewell and set off to find somewhere to camp. The roads are so bad you cannot go more than 60kph without destroying a tyre, but we calculated that by 6pm we would arrive at a lake, which would be a great place to park up for the night.

We couldn’t have asked for a more perfect first day in the country we had been so eager to visit. Not only that but having aced our Mongolian border crossing, we now have nine days to get to the capital for the final Mongol Rally party. If all goes to plan, that should be a breeze.