crankandpiston.com test drives the ‘new’ Volkswagen Touareg to find out how this seemingly everyday SUV handles the rough stuff. Quite well, as it turns out…

Well now, that’s made us sit up.

crankandpiston.com is in Munich, being given the ins and outs of the ‘new’ Volkswagen Touareg (like the Porsche Cayenne Turbo, an updated model ahead of a brand new third generation SUV due within the next few years). Having spent time on the improved safety systems, independent steel-spring suspension and revised interior, the presentation now switches to Team Zietlow and its 17,000km-long expedition from Nordkapp, Norway, to Cape Agulhas, the southernmost point of Africa. In a Touareg.

There are some notable ‘hmms’, ‘ahhh’s and ‘ohhh’s from the group and not a few ruffled brows. Certainly VW’s largest SUV is no newboy, having made its debut in 2002 and sold 475,000 units during its first eight-year run. Well-known for its day-to-day practicalities, it’s hardly up there with the Toyota Land Cruisers and Jeep Wranglers as the most rugged of all-terrain vehicles. Or so it appears. Team Zietlow’s 2014 adventure will not be its first with the Touareg, nor even the second. In 2011, team members Rainer Zietlow, Marius Biela and Matthias Prillwitz set a world record time of 11 days, 17 hours on the fearsome ‘Panamerican’ run from Tierra del Fuego to Alaska, breaking another world record a year later with ‘Russtralia’ by travelling from Melbourne to St. Petersburg in 17 days and 18 hours. Both times in a Volkswagen Touareg, an SUV that won the prestigious Dakar Rally three times on the bounce from ’09-’11 and took second place on its first attempt in 2006, the highest ever place for a diesel-powered 4×4 since the rally’s inaugural run in 1978.

Looks, as it turns out, can be deceiving…. 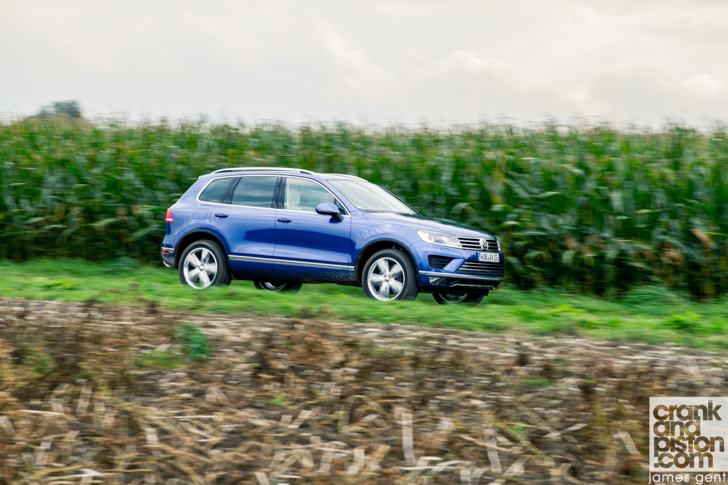 Appropriate since the new Touareg has received only the mildest of facelifts, and your powers of deduction will have to work overtime to find them. Bi-xenon headlights now come as standard at the front as does a restyled front bumper, while a chrome strip for ‘sharpened character lines’ runs the length of the vehicle. And that’s pretty much it. Ditto the interior, which brings updated aluminium switches, white ambient lighting instead of red, and manually adjustable lumbar support for the front seats. Lift the bonnet of our test model and the 4134cc V8 TDI (which, sorry Middle East, ain’t coming your way) now produces 335bhp and 590lb ft of torque, a dash more fuel efficiency, and a tad more power than its predecessor. Again, unless you close your eyes, go to your happy place and concentrate really hard, you’re unlikely to notice a tangible difference. As is the case with most mainstream Volkswagens that aren’t a Golf or Scirocco, on the road the Touareg is unlikely to have you jumping up and down on the sofa but it does the job exactly as it’s supposed courtesy of good linear acceleration, weighty steering, progressive brakes and good road holding.

Why not just stop the review here then and let you go about your business in peace? What?! Before we’ve tested that Dakar/Australia/Finland/Panamerican-proved ruggedness off-road? Judging by the course Volkswagen has laid out, they never let us get away with that…

And this is no half-baked ‘course’ made from road cones in the parking lot of a local convention centre. Volkswagen are pulling no punches. 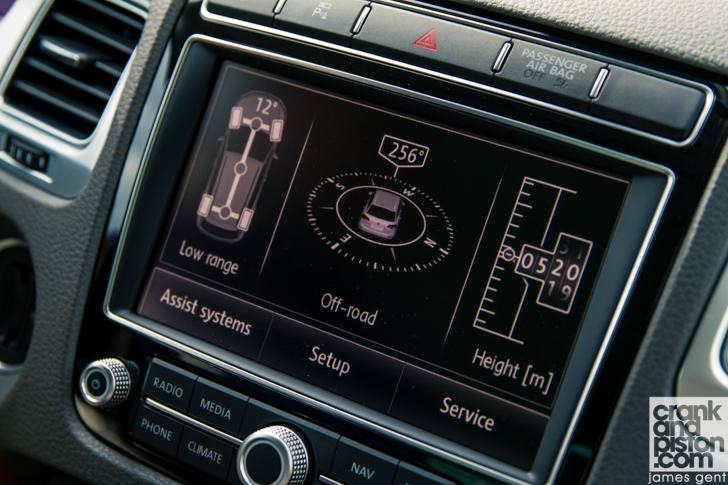 Our first obstacle is an 80-degree drop (yep, the first obstacle). Our instructor instructs us – after a friendly “Deutsch oder Englisch?” to distribute traction from the rear axle to front with the 4MOTION system and raise the ride height via the rotar dials on the transmission tunnel. Our ‘Terrain Tech’ off-road version has some specially fitted tyres and the floor mats have been chucked for washable ones, but there’s little difference to its road-going counterpart. And we’re about to put it to the test on an 80-degree incline.

“Slowly, slowly slowly” our instructor informs us from the ‘valley’ below with a raised hand, and in we go. The bonnet drops a little. Then more. Then a little more. And more. And – dear God – yet more. The only thing I can see through the windscreen is dirt (what the panicked side of my brain is calling ‘impending death’). All I can feel is my body straining against the seatbelt as gravity shows no mercy and the passenger-side rear wheel lifting COMPLETELY off the ground. Cue swearing. Lots. And lots. Of swearing.

And yet despite balancing on just three wheels at an angle that the laws of physics themselves can barely comprehend, there is no grinding of metal on metal, gear upon gear or rubber on dirt to suggest that the Volkswagen is overly exerting itself. With the necessary driver assistance technologies doing all the grunt work, all I need to do is grip the wheel with ever-whitening knuckles and mentally put my affairs in order until we’re back on the ground. In a Touareg that – incredibly – has barely broken sweat. 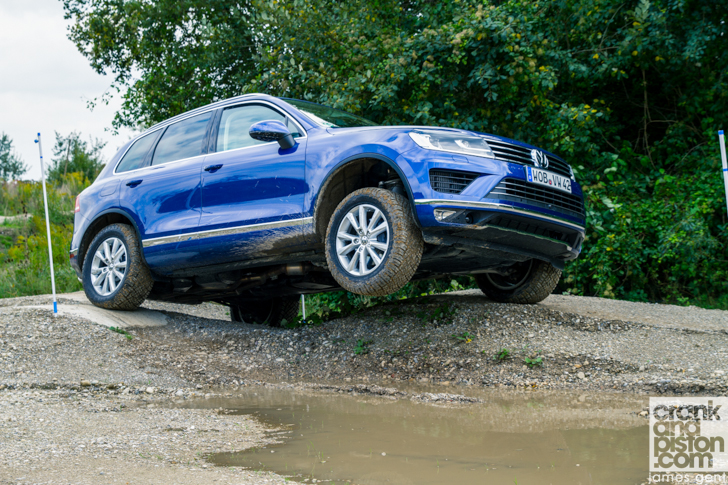 I resist the temptation to leap from the driver’s side door and kiss the dirt with joy when we’re back on vertical terra firma, and instead drive into the next obstacle: a see-saw like parade of raised platforms designed to raise one wheel at a time and put that steel-spring suspension to work: as the front drivers side wheel goes up, the passenger’s stays on the ground, the same happening at the rear as we move forward. With diffs locked and with the most tentative of right foots, a bit of luck and good placement, it’s entirely possible to balance the Touareg on two wheels – the driver’s side front and passenger rear – for a few seconds, without ripping the suspension arms from their moorings or punching a hole into the underbody. And once again, faced with what feels like imminent disaster, the SUV maintains its composure when its driver does not. Put those ‘Epic Fail’ YouTube video titles away: the Touareg is proving itself ridiculously capable across terrain one wouldn’t have expected to find one of Volkswagen’s most popular daily drivers.

I could go on but I doubt my dignity could take the hit. Plus I think you get the gist. On-road, good road handling, noise reduction in the cabin, comfortable seats, and a pokey engine make long journeys in the new Volkswagen Touareg an easy if not electrifying experience. Dig beneath that Reef Blue Metallic paint though and you’ll find an SUV that tamed the Dakar three times, broke two world records across rugged terrain, and continues to astound to this day. And will probably make you sit up too.