Nine months before its Tokyo reveal, Aston Martin’s engineers were testing the all-new V8 Vantage in northern Sweden. James Gent put on his thermals for an exclusive first ride

It’s November 30 and, at Aston Martin’s largest showroom in Tokyo, the silks have just been pulled from the 2018 Vantage – the first all-new generation of Aston’s entry-level sports car since 2005. Applause, understandably, is plentiful and the camera flashes almost epileptic in their ferocity as company CEO Andy Palmer and his ilk laud “the worthy successor” for nearly an hour.

As I write this though, it’s late in the preceding February, and there’s neither trays of nibbles nor high-heeled Japanese hostesses to be seen. Instead, our backdrop is the stunning tree-lined landscape around Arvidsjaur’s winter testing facility in Sweden. Overnight, the temperature has ‘risen’ to a balmy -13°C, and the only sound that punctures the Nordic silence is the collective rustle of our winter parkas and, half a kilometre away, a twin-turbo V8 being fired into life.

Within moments, the testing mule that will eventually become AM 600 – the new Vantage – hoves into view, driven by Aston Martin’s Mark Barron and decked in aptly winterish white camouflage paint. Shifting into fourth gear, the car almost nonchalantly begins its climb, mostly sideways, up the icy slope in front of us at 50kph, a video drone whirring 100-feet overhead in hot pursuit for added drama. To the Aston crew at Arvidsjaur though, it’s just another day in the sub-zero office. Not that the enormity of the project has eluded them, of course.

“Previously, our line-up was very confused. The Rapide, for instance, was a really nice handling car but the ride was ‘okay’, and can – in fact, should – be more comfortable. If you drove a DB9, it was very punchy but just not ‘GT’ enough. It’s all part of an evolution, about pushing the cars back into the positions they need to be. It started with the DB11 last year, and now, with the Vantage, the feel, the character and the agility will be more relevant to its segment than it previously has been.” 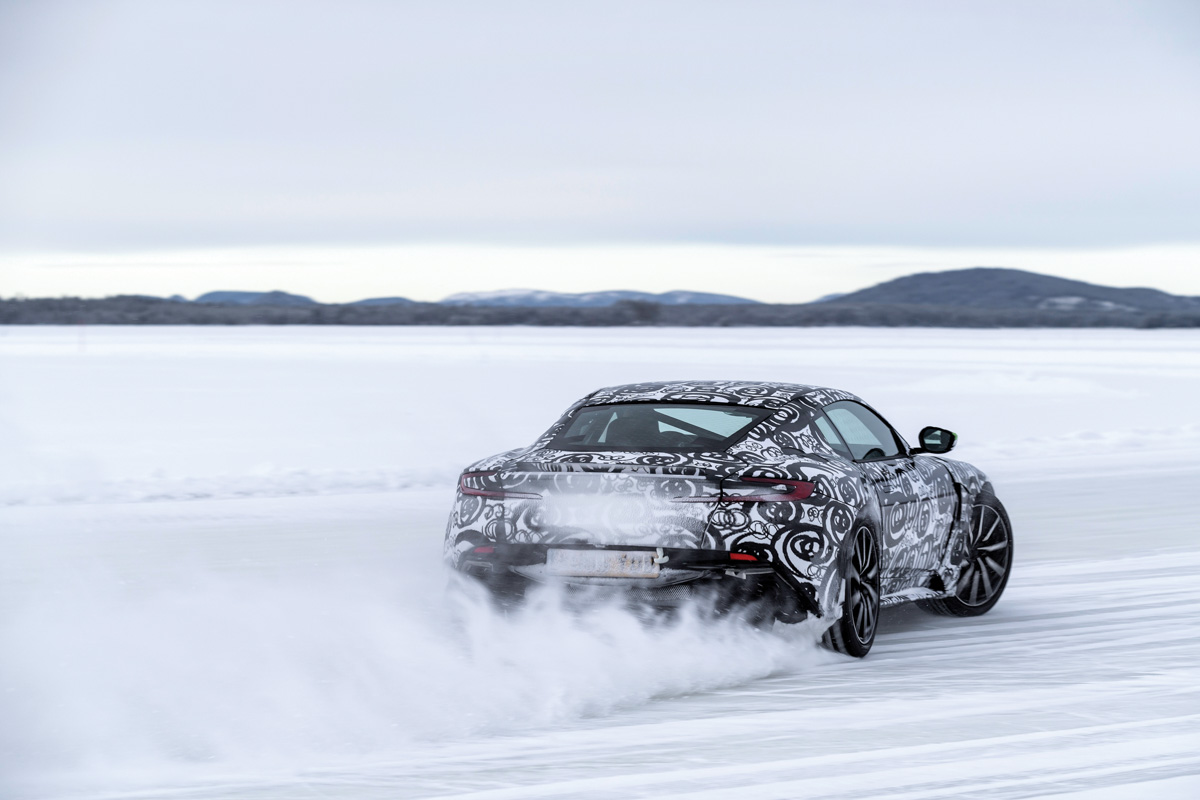 Big words, yes, but as the Vantage power slides its way up the slope for a fifth time – Mark assured by the film crew that “just one more run” should do it – it’s hard not to be convinced. Nothing of the old Vantage remains save the badges, and while Matt says there are still nine months of testing to go – “I’d say we’re about 60/70 per cent of the way there” – the underbody is mostly signed off, thanks in no small part to lessons learnt from the DB11.

“The DB9 was the first car that really needed replacing, and, from that, we started developing the range by effectively shrinking everything down,” Matt continues as Mark, finally free from his video duties, clambers out of the bucket seat. “Again, it’s an evolution of the product. I mean, look at the 911; every generation you think, ‘they can’t make that any better.’ And then of course, they do, because they’ve learnt so much from the old one.”

“Don’t forget,” adds Mark, “the DB11 has a broader remit in terms of what it has to do,” he explains while zipping up his puffer jacket, “whereas the Vantage is more specialist and driver-focused. The learning curve has been huge. It’s a new platform, new software, new everything, and you’ll definitely see those lessons incorporated in the Vantage.”

Indeed, the mule ticking itself cool nearby is far from ‘a baby DB’. Seventy per cent of the aluminium structure is bespoke, including new front and rear subframes and upgraded suspension geometry. The steering rack meanwhile is the same 13:1 setup as found on the DB11, but its shorter base allows for a greater rate of response, and thus manoeuvrability. Even the dry weight has dropped to an admirable 1,530kg.

This also marks the first time an electronic rear differential has been included on a production Aston Martin. It’s linked to the stability control systems – and is thus another item on Aston’s to-do list this week – to channel power to the relevant wheel as required, to offer a broader range of performance. “It’s given us a range of capability we’ve never had before,” explains Mark, “but it’s just us showing off really.”

The other big addition lies under the bonnet. The previously naturally aspirated V8 has been scrapped in favour of, effectively, the same basic hub you’ll find in a Mercedes-AMG GT S.  The ‘hot vee’ four-litre, twin-turbo V8 comes complete with AMG’s induction and exhaust system, although Matt is quick to emphasise that the drivetrain has been fully calibrated by Gaydon and now sits lower and further back on the chassis for perfect 50:50 weight distribution.

The awful seven-speed automatic transmission of the V8 S has mercifully been chucked in favour of a new eight-speed ZF transmission that, in this spec in Sweden, sends “around 500bhp” to the rear wheels, meaning the drivetrain is theoretically capable of 0-100kph in “3.6 seconds”. That’s solid Audi R8 LMS, Mercedes-AMG and McLaren 540C territory already, and could be more if Aston’s engineers eventually get their way.

“Engineers never want to stop,” Mark explains. “The engine team has been up in Finland working on their calibrations, which they then sent to us ahead of this test. These are very complex systems, and they’re constantly being developed. So the engine will get better, the transmission will get better, the e-diff, the tyres, the chassis, etc., ahead of more tests later in the year. This is going to be something very special.”

During my time with the car, its looks remain a mystery. Looking more like a mongrelised DB11 in Sweden, the restyled headlights, clamshell bonnet, gorgeously undulating rear bodywork and downforce-increasing side ‘gills’ unveiled in questionable ‘Lime Essence’ nine months later are nowhere to be seen. It’s much the same story in the cabin too, where Mercedes-AMG switchgear and Alcantara upholstery have been replaced, temporarily, with two Recaro bucket seats and four-point harnesses, a half roll-cage, and non-functioning driver and infotainment screens. On the transmission tunnel lie two flick switches that activate the traction control, while in the passenger footwell is the data receiver for the test program. There’s also a large, ‘panic red’ button inelegantly taped to the transmission tunnel between the seats, which cuts power to the DSC should anything go wrong. 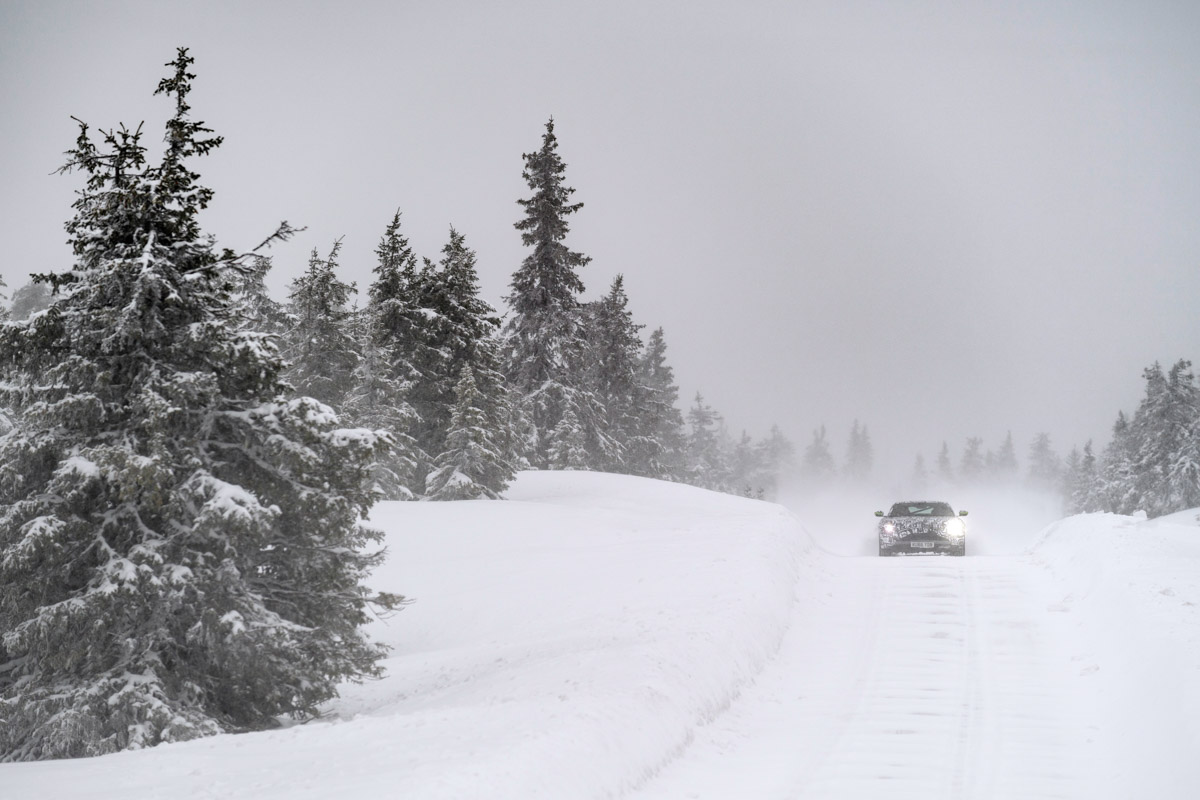 Actually driving this prototype Aston is out of the question, despite constant assurances that “I’ll be careful.” However, both Mark and Matt are keen to demonstrate to evo Middle East – just one of only eight publications worldwide to receive an invite – that their talk is not just PR bluster, and invite me to ride pillion for the remainder of the afternoon. With Matt now taking the wheel for one last 50kph thrash up the icy slope, we make our way back to the Arvidsjaur testing facility for a few laps of its 1.5km bespoke circuit, carved completely from the ice itself.

Clumps of snow pushed into the whopping front splitter show earlier signs of SBA – or ‘Snow Bank Assist’, as the guys jokingly refer to it – but straight off the bat Matt is hard on the throttle in Sport+. The rear wheels spin furiously but the traction control works constantly, but not overly heavy-handedly, behind the scenes to keep them in-check. There’s no obvious cut in the power as it does so, and Matt is still capable of hitting third gear in corners that even the most solid of 4x4s would struggle not to understeer through. There’s a jink here, the occasional realisation that the pine trees are getting closer to our windscreen there, and I can’t help but wonder as we complete the first lap at comparatively blistering speeds, whether my ever-whitening knuckles can be seen through my gloves. And yet there’s never a moment when the red ‘panic’ button is needed – in these difficult conditions, everything feels wonderfully composed.

Granted, much of this is down to the Vantage’s winter-spec Pirelli tyres, an offshoot of the bespoke performance P-Zeros the production version will wear from launch come November (apparently the Bridgestone equivalents on the DB11 are ‘too comfort’ for a true sports car). I’m reminded though, not to forget the significance of the E-Diff to this ‘evolution’.

“From our side, we’re looking at how the stability controls react to low, medium and high friction, but from there we’ll move on to wet and dry road testing. This calibration is relevant for Sweden” – I still cant quite fathom how poised this rear-wheel drive, 500(ish)bhp Aston Martin sports car feels on, essentially, sheet ice – “but most of our customers are going to be driving on dry and wet, so that’s where our focus will be later. By then the engine calibration, the transmission, the chassis dynamics, the brakes, etc. will have been done and we will have nearly a finished car, and it’ll be our job to fine-tune everything. 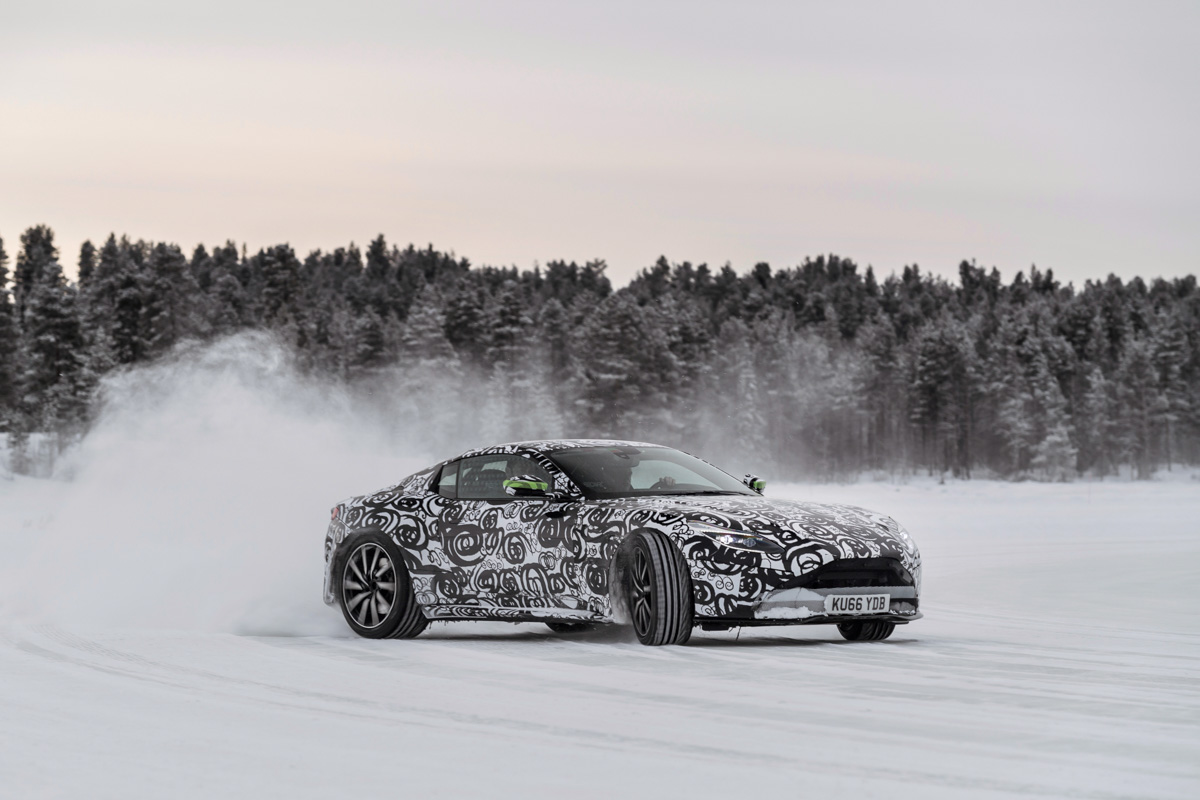 “We’re here for the cold, obviously, but I’m not looking at how the Vantage will start in the morning, or how the heater works. I’m purely interested in the traction control, the E-Diff, and how this car performs.”

As if to emphasise this point beyond doubt, Matt disables the traction control altogether for our next lap. Suddenly the rear wheels, now free of their ESP jailers, start to break on the loose surface, jinking gracefully out of the corners and down the straights too. But again, even without the electronic safety net, there’s not a huge amount of fuss or consternation spread over Matt’s face. He’s being made to work harder, true, but it’s not the cacophony of flailing limbs I might have expected. He, and, indeed, this new, more performance-focused Vantage, is making it all seem so easy.

Already then, Matt, Mark and the team seem well on-track with stability, but there are a few pointers – design inside and out, aside – the development team still needs to address. Aston’s characteristic audible drama can be heard in the recesses of the new V8, but the guys do admit the soundtrack is still too ‘gruff’. Similarly, when the revs drop into the mid-range, there’s a faint whine resonating from the transmission, and how the Vantage will actually ride across non-rutted, non-frozen roads is anybody’s guess at this moment.

But of course, engine notes and ride comfort are not why we’re in Arvidsjaur today, and as if on cue, the sun begins to drop, transforming the Arctic skyline into the most beautiful cascade of deep yellows and oranges. We’re here to witness the beginning of a new dawn, one that started with 2016’s launch of the DB11, and one that really will get into its stride with this new sports car.

This is not simply a launch for a launch’s sake. It heralds a new era for Aston Martin, one that could – scratch that, has to – bolster the accounts, define the company and its product line-up, and create a credible rival to Porsche, Mercedes-AMG, and, further down the line, Ferrari. There is still an incredible amount of work to be done, even if most of that comes down to simple ‘fine tuning’. But hunkered in their winter jackets, and with the darkened skies now starting to close in around us, Matt and Mark are confident that the Vantage, like the DB11 before it, will be a true turning point for Aston Martin. In Tokyo, nine months later, few would argue against that. 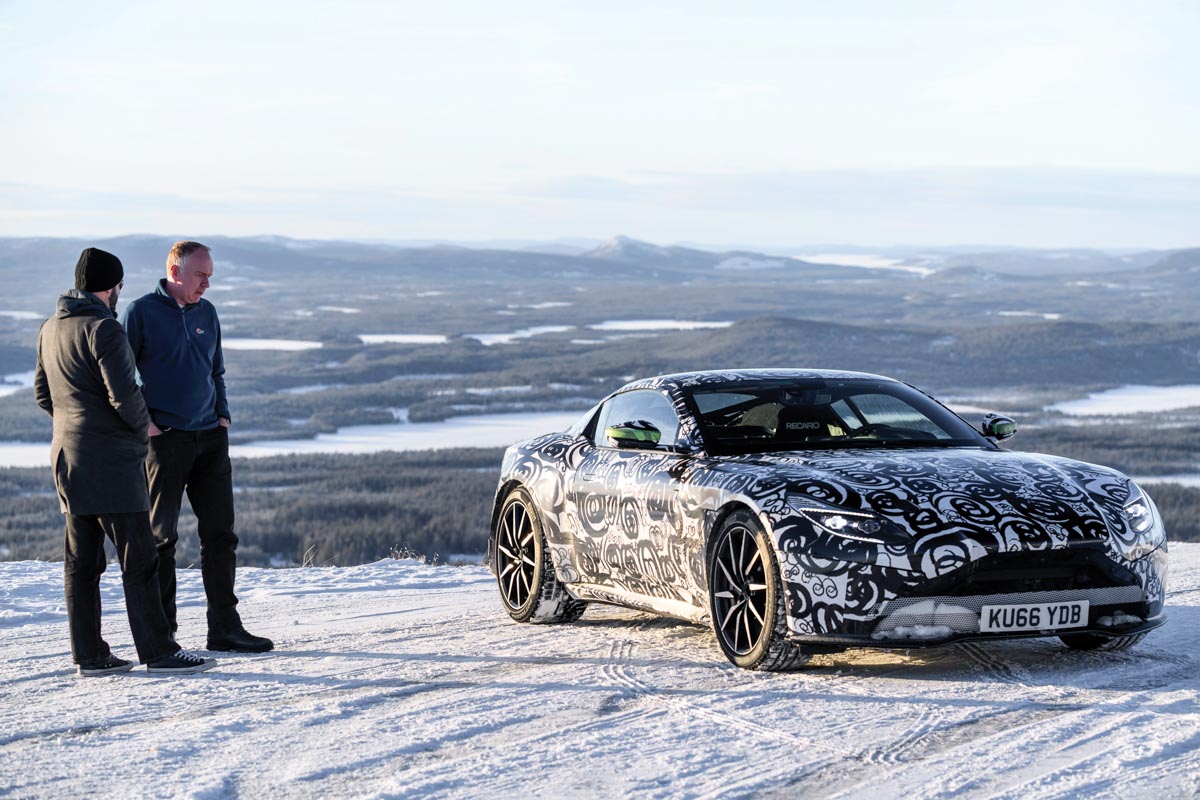