Available in four versions, the new Toyota Supra is only weeks away from its Geneva 2018 reveal

Toyota has presented us with the first official confirmation that the new Toyota Supra will take make its long-awaited debut at the 2018 Geneva motor show on March 6th. Except, it doesn’t look like we’ll be seeing the reborn Supra production car on the Toyota stand. Instead, a new teaser image accompanied by a minimalist press release promise a ‘modern racing concept will signal Toyota’s commitment to bringing its most iconic sports car back to the market’.

The shadowy teaser picture shows a rear detail of the car with the double-bulging roof, powerful haunches and duck tail boot spoiler we’ve already seen in spy shots, but added is a dramatic motorsport-style rear wing. It suggests our first look at the new Supra in Geneva is likely to be in the form of a competition car but we’d still expect the concept to offer up plenty of detail regarding the eventual production version that’s being developed in conjunction with the new BMW Z4.

Of course, some information about the car has already leaked into the public domain. We understand that the new Toyota Supra is destined to be exclusively available under Toyota’s Gazoo Racing sub-brand, while sources inside Toyota have let slip that the new coupe will be available in four versions, all powered by six-cylinder engines driving the rear wheels.

In the same vein as other GR models, the Supra should be available in standard, GR, GR Sport and top-level GRMN forms, each with varying levels of performance capability. These model lines will also be offered with an extensive set of factory-sourced aftermarket components like many Japanese performance cars. Final details are still far from being finalised for the European market, but Toyota is adamant that the Supra will differ greatly between the book ends of its range, unlike the comparatively limited range in models like the GT 86.

The new Toyota Supra has been developed alongside the forthcoming BMW Z4 as part of a joint venture between Toyota and BMW. Initial plans for the Supra favoured a GT Coupe rather than out-and-out sports car, but Toyota CEO, Akio Toyoda stepped in to ensure Gazoo prioritised dynamics and performance above anything else following the decision to sell the Supra under the Gazoo Racing banner.

“The Supra has a strong following and the new car must appeal to these owners,” said Shigeki Tomoyama, President of Gazoo Racing. “The last Supra had a straight-six engine, was twin-turbocharged and rear-wheel drive and the new car must continue this philosophy.” Tomoyama, who owns a 600bhp carbonfibre bodied 1997 Supra, refused to confirm how much the new Supra might weigh when it was suggested it should come in at under 1500kg. Instead he pointed out that his Supra, when new, weighed 1200kg and did confirm that the new Supra would have a 50/50 weight distribution. 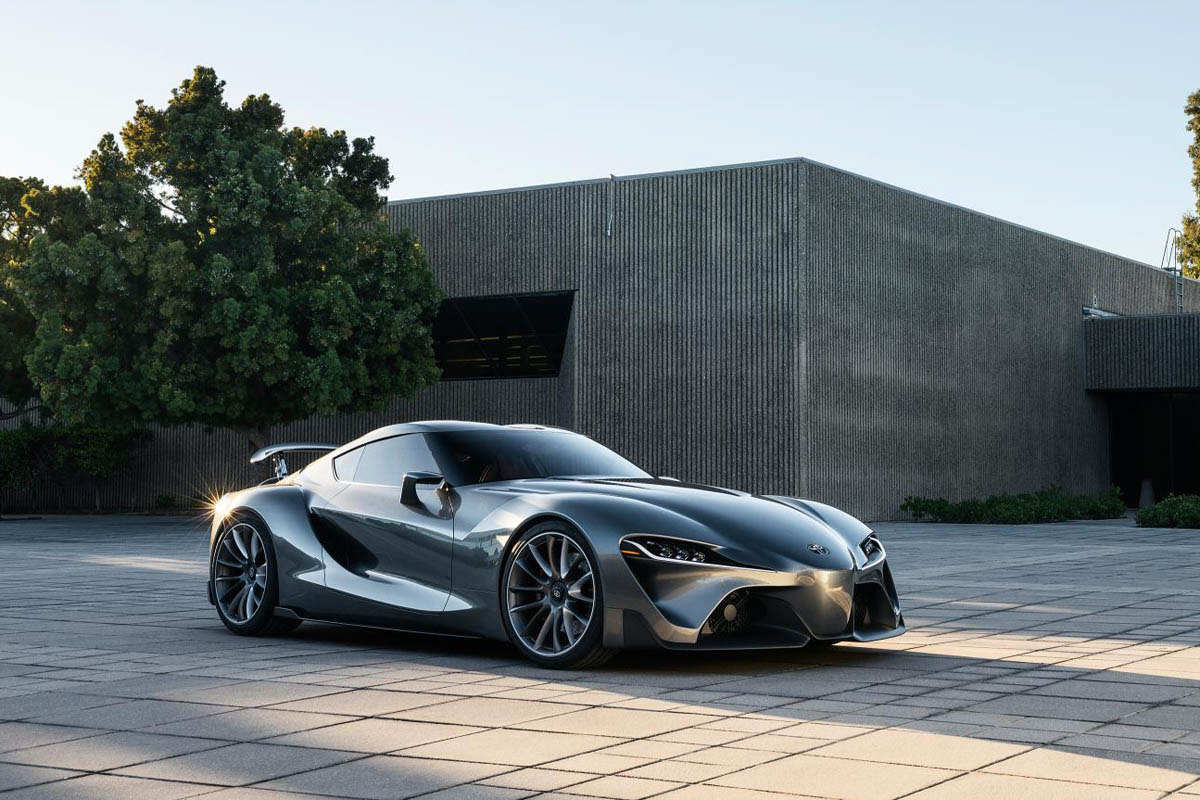 Talking about how the Supra would differ from its BMW Z4 sister car, Tomoyama said “BMW’s car is a roadster, ours is a coupe. We have worked with BMW’s engineers on the development of the basic car and on shared components, but when it comes to how both cars drive they will be very different. They have very different philosophies and the Supra will be a performance car first.” This is claim substantiated by the cars Tomoyama and his team have benchmarked the new Supra against: the BMW M3/M4 and the Porsche 911.

Tomoyama was coy in regards to potential powertrain options that will be offered in the new Supra, but confirmed hybrid power could feature – drawing on the technology employed in Toyota’s LMP1 programme – if it offers a distinct performance benefit. “BMW’s car is a roadster, ours is a coupe. We have worked with BMW’s engineers on the development of the basic car and on shared components, but when it comes to how both cars drive they will be very different. They have very different philosophies and the Supra will be a performance car first.”

“The challenge is to maximise the performance – speed and power – from batteries and electric motors as these both add weight. For a sports car we will look at smaller batteries that are charged with the very best regeneration braking system; a system that we have been developing in the World Endurance Championship,” continued the Gazoo Racing President. Tomoyama also confirmed Toyota will compete in the World Endurance Championship in 2018, as the only remaining factory works team, and has no plans to enter Formula E.

The new Supra has been developed as part of Toyota’s plan to release a trio of performance cars. Set to sit at the top of the new group of sports models, it will be the biggest, most powerful car of the ‘three brothers’. A replacement for Toyota’s small roadster, the MR2 will be the smallest and lightest while the GT86, which will be subject to constant development, will fill the gap between the two new cars.

The previous generation Supra went off sale in 2002, but it still remains popular with car enthusiasts thanks to an abundance of tuning parts and for its ability to produce quite ludicrous amounts of power from its robust turbocharged straight-six engine.

Just because the new Supra will be Toyota’s largest, flagship performance model don’t think for a minute that it will be a ponderous and heavy beast. Toyota engineer and Gazoo Racing chief, Teysuya Tada, told evo what we could expect from the new sports car, and very promising it was too: ‘A Supra should be lighter than it’s rivals. Personally speaking, my favourite Porsche is the Boxster and Cayman, although I am a little disappointed with the four-cylinder engine. The Cayman helps a lot of us here to make a sports car.’

Unlike Toyota’s back-to-basics sports car, the GT86, we expect the new Supra to be powered by a much more high-tech drivetrain. Toyota has admitted it is also open to creating a hybrid sports car at some point in the future, but because this is part of the company’s long term plan, we expect the Supra to be petrol-only initially. A hybrid version may follow later, but our conversation with Tada revealed he was very excited about the idea of a mid-engined hybrid sports car. Expect the next MR2 to get a supplementary electric motor before the front-engined Supra.

Rather than a full hybrid system, the new Supra may use electrics to gently help increase the performance of its petrol engine. Toyota has applied for a patent for an electric supercharger, the plans are in depth and suggest the technology is close to being production ready; possibly in time for the Supra’s 2018 launch.

The application shows a standalone electric compressor, but unlike the one used in the Audi SQ7, Toyota’s solution uses, what looks like, a turbine and compressor housing from a conventional turbocharger. Rather than the turbine shaft being spun by exhaust gasses though, an electric motor generates the movement. 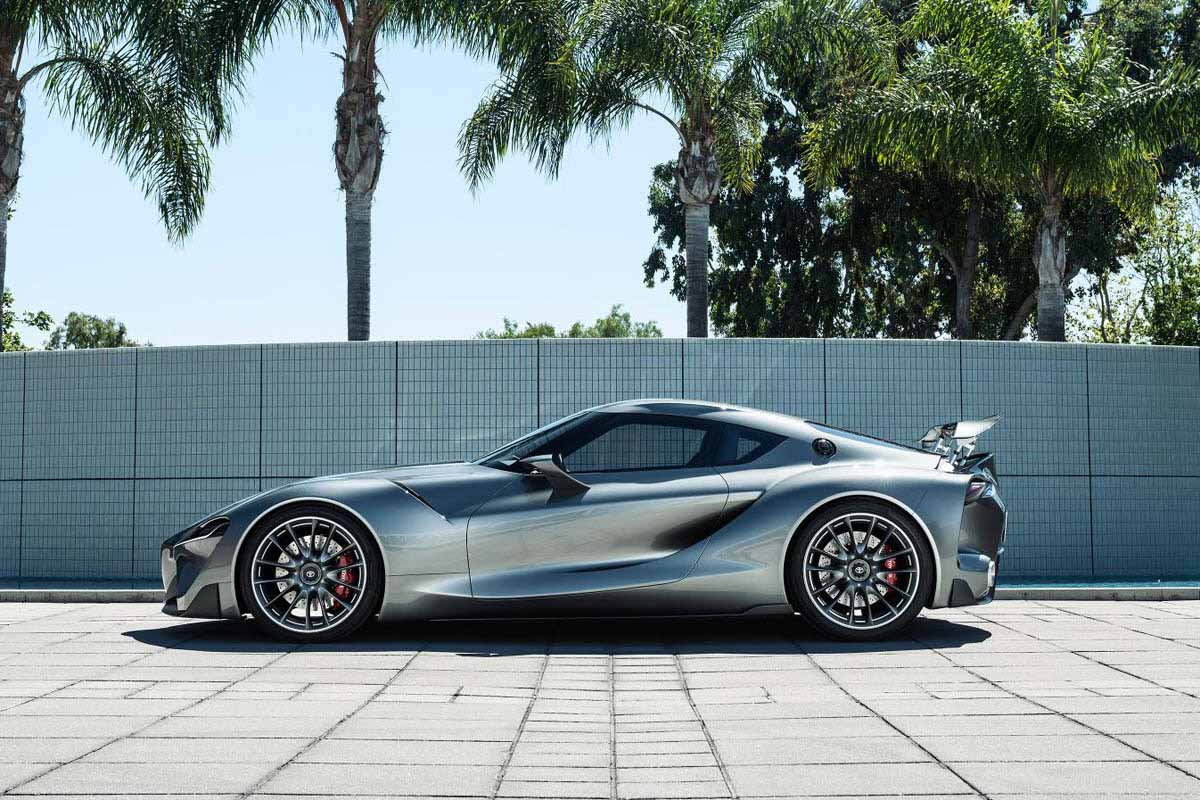 Current Formula 1 cars use a similar system to increase power and reduce turbo lag, but rather than being solely powered by electrics the turbos on F1 cars use both an electric motor and exhaust gasses. There’s no indication, though, that Toyota’s electric compressor will enhance a turbocharger or be an independent unit.

Our biggest clue to what the new Supra might look like has been the FT-1 concept car that made its debut at the 2014 Detroit motor show. The camouflaged test car showed a profile and strong central nose similar to that of the FT-1.

Toyota calls the FT-1 ‘a symbol that captures elements of the emotion and energy’ of future products. Originally penned by CALTY Design Research, Toyota’s California-based American design team, who took their influence from classic Toyota sports cars like the 2000GT and Celica.

The latest images show the FT-1 painted in graphite metallic paintwork rather than the red hue seen on the original concept, the CALTY team also transformed the interior. The previous red and black theme has made way for saddle tan leather, giving the cabin a more ‘sophisticated’ feel.

Toyota says its designers drew inspiration from modern superhero films for the FT-1’s cockpit, drawing on the use of high-tech materials rather than the bright, garish colours of comic book characters. To this end, CALTY went as far as comparing leather thicknesses, grain size and textures to find the perfect combination for the FT-1’s simple, driver-focused cabin.

Seats are punctuated with a raised metal mesh for both ventilation and texture, and Toyota touts the 3D, technical look of the instrument panel’s embossed graphic finish.

‘We wanted the driver to have a feeling of flow while at the wheel – to be able to focus on the road and nothing else,’ explains Selene Lee, a CALTY designer. ‘Our aim was to ensure everything supported the driver through efficient choices’ Lee adds, noting the new colour choices have the same ‘in the zone’ feel as before, with a greater premium air.

Even decked out in a camo wrap, the overall shape of the Supra is impossible to hide – long and low, with a classic sports car silhouette in the same vein as the Toyota FT-1 concept seen previously. It also shows off a duck tail spoiler on the boot lid.

The new Toyota Supra is set to arrive in 2018, shortly after BMW launches its Z4 sibling. Will the Toyota-BMW partnership (named the Silk Road Project because of its East-meets-West approach) bear fruit? It’s not the first time the brands have worked together, having shared diesel engine tech across the Toyota, BMW and MINI brands for several years as well as collaborating on hydrogen fuel cell tech. We look forward to seeing if the Silk Road Project can produce a convincing successor to the iconic Supra.