One of Toyota’s biggest sellers has been given a refresh , and we find out if it’s only skin-metal deep

As we’re being walked around the new 2016 Toyota Land Cruiser – being asked to pay careful attention to this new LED headlight here or that tautened stabilizer bar there – one phrase in particular catches my attention: ‘the Land Cruiser is no brute.’ Usually such statements – especially at such marketing-heavy events as an international product launch – are taken with a dose of salt and some healthy cynicism, but given the now 64-year history of the Land Cruiser, this particular phrase does strike a chord. Post World War II for instance, the Land Cruiser was a utilitarian ‘go anywhere’ vehicle for Japan’s military and police forces, and even today, with more than 320,000 units sold through Al-Futtaim Motors, the Land Cruiser is still amongst the most recognisable of the region’s defence vehicles. Gone though is the fatigue paint in favour of embossed chrome moulding and semi-aniline perforated leather, a utilitarian basher transformed into a full capacity SUV, one of the most popular on the automotive scene and easily the biggest for Toyota.

A new, more refined character for 2016 then. This despite a new ‘gritty’ look and a more powerful V8 chomper under the concave bonnet. There’s a revised hydraulic suspension setup for improved terrain performance that doesn’t erode ride comfort, a new first-in-class eight-speed automatic that offers a wider ratio spread than the six-speed it replaces, and thus, improved fuel efficiency and enhanced acceleration. And yes, there are TV screens mounted for second row passengers. Times have changed excessively for the Land Cruiser and clearly Toyota is not ready to end the Land Cruiser’s evolution. I can’t help but wonder though, given the lineage that flows skin-metal-deep, if somewhere the brute doth indeed dwell… 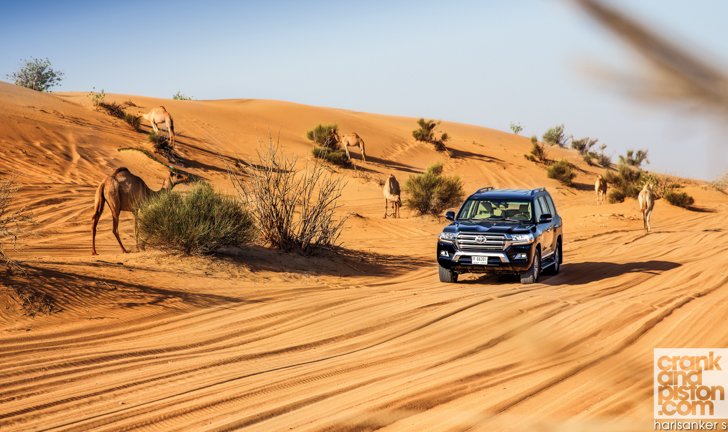 On the road at least – our walk around now completed – one could suggest so given the looks the new design is getting. From the A-pillars forward, the body-on-frame construction has received some serious botox injections, key among which being the new bumpers, sharper headlight design, the revised grille with integrated ‘Land Cruiser’ emblem, and the bonnet’s distinctive power bulges. To shamelessly borrow a tagline from sister Camry, it’s a bold new look, one more aggressive than the rather awkward look partaken by the outgoing model. Atop the high-strength steel construction lies one of 10 exterior colours – Dark Blue Mica in today’s case – while at the back, the rawness of the design has softened to emphasise those remodelled taillights. There is quite a lot of chrome on our GXR test model, and some enormous 285/60 R18 tyres on the 18in alloys, but it is a striking look. I wouldn’t go quite as far as to call it ‘functional beauty’ as the Toyota team seem to be insisting, but it’s pretty snappy. It’s getting plenty of approving nods from passing motorists.

“Times have changed, but clearly Toyota is not ready to end the Land Cruiser’s evolution”

Ditto the revised interior, the bulk of which I get to savour as we make our way across town to an off-road course we’ve laid out for some adolescent hooning this morning (but more on that in a second). First impressions concern the updated infotainment system, which incorporates ‘Shimamoku instrumentation’ – yeah, we didn’t know either – for a more elegant looking interior, and when combined with the minimalist dashboard, give or take a few too many buttons, it’s another significant improvement. There’s bags of headroom, a surprisingly reasonable amount of legroom given that there’s also three-bank seating (even if the headrests do block rear visibility somewhat), and an extraordinarily comfortable ride quality, the adaptive variable suspension and those armchair-like seats double-teaming nicely.

The main item on the agenda du jour however is the drivetrain, which incorporates both a 5.7-litre V8 and a new eight-speed, the first such system equipped to a Toyota product. The combined drivetrain produces 362bhp and an impressive 398lb-ft of torque, the vast majority of which is unleashed in the low rev range, handy when lugging 3350kg around. 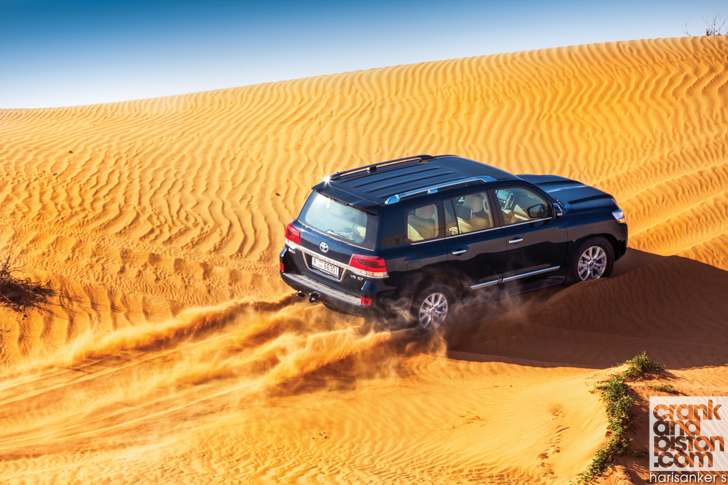 Despite it being ‘no brute’, our brand new Land Cruiser (quite literally, since there are less than 40km on the clock) nevertheless takes no mercy on the dunes, the tyres digging in and gripping on even the loosest of surfaces to haul itself from one dune to the next. Even in high four-wheel drive on the two-speed transfer case, there’s an impressive amount of torque at the rear axle, solid acceleration being fed through all four wheels to keep up the momentum. Steering, though slightly mushy given that most of the air has been let out of the tyres, still feels surprisingly direct on the sands, the nose of the Toyota – and that concave design – wafting from one dune to the next almost effortlessly: several times I have to remind myself that this is a 3.5-ton SUV.

What continues to impress is the suspension: at some slightly insane angles, when the temptation to hit the brake pedal seems almost too much to bear, there’s still enough stiffness to keep body roll (mostly) under control. This surprising sense of manoeuvrability is amplified by the new Off-Road Turn Assist function, which brakes the inside wheels under turn-in to create a pivot effect and tighten the turning radius. It’s still a sizeable area required for the Land Cruiser to work in, but after a few last minute hesitations and a couple of descents that seem slightly steeper close up than they did on approach, it comes as a welcome relief. 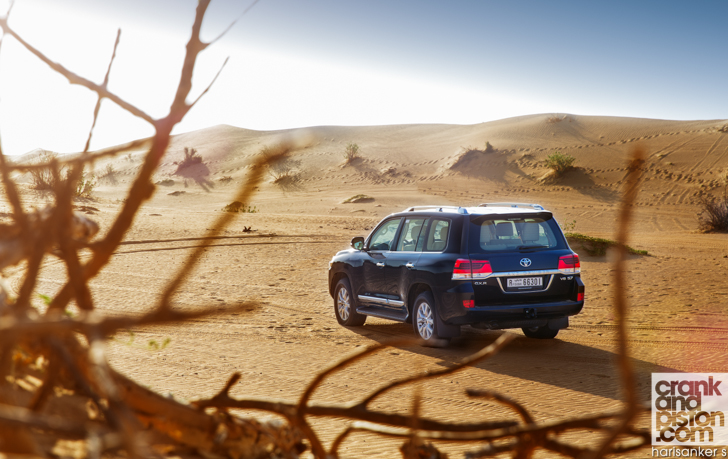 Our run now complete, it’s time to re-inflate the tyres and begin patting sand from my clothes for the next three days. It’s been worth it though. The new Land Cruiser’s is a sharp new design certainly, and one that brings to mind a slightly more aggressive turn of performance than arguably its predecessors have managed, but it finds a balance, mating grittiness with everyday charm, and there’s little doubt Land Cruiser loyalists will go potty for that. Beneath the new look lies some seriously impressive potential, not just given the ease and comfort with which the big SUV glides through town and on the highway, but in the manner that updated V8 – torque and all – manages to work the dunes and barely break a sweat in the process.

The new Land Cruiser is a triumph, one more than capable of heralding another six decades of production for Toyota.