The next S-class, Mercedes’ archetypal luxury saloon and tech leader, is ready for launch 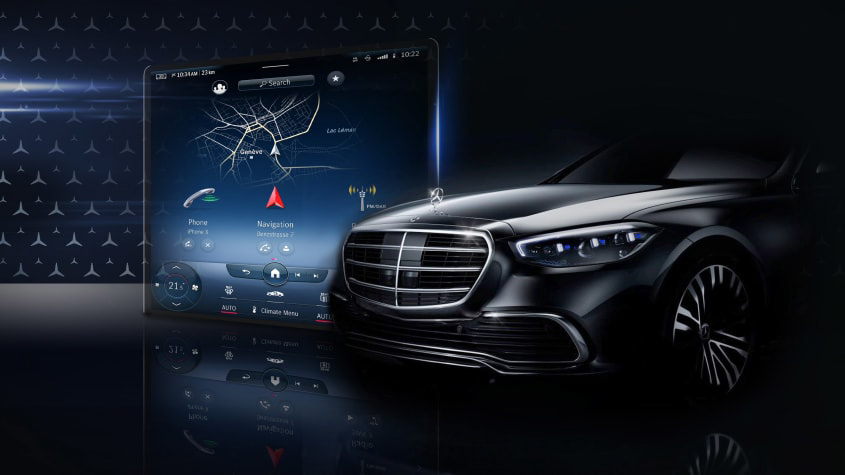 The launch of the next-generation Mercedes-Benz S-class isn’t far away, with a first official look at the cabin coming shortly after a teaser image of its exterior design. The latest images preview the all-new flagship saloon that will not only reveal some of the brand’s next-generation in-car technology but also inform Merc’s future aesthetic direction.

Released ahead of a string of teaser films detailing the saloon’s fresh cabin, Mercedes-Benz offered us a brief look at the S-class’s large new infotainment display. A render also gave us a detailed look at its user interface, one that appears to bring controls for media, climate control and navigation onto a single touchscreen display.

The exterior teaser from May suggests that the next S-class will maintain its upright slatted grille with a small three-pointed star mounted on the bonnet, but this time in a slightly more organic, curvaceous shape. The new grille is flanked by much thinner LED lighting units with ornate internal design elements that inevitably incorporate Merc’s next-generation lighting tech.

The overall shape of the S-class is familiar though, with an upright body free of sharp creases or aggressive shapes save for the now trademark crease that runs just below the windowline. Judging by images of the many S-class prototypes that have been spotted for over 12 months now, the glasshouse appears even more upright than the current generation’s, pointing towards an emphasis on rear-seat headroom. Odd box-like extensions where the door handles might otherwise be indicate the likely application of retractable door handles, much like those fitted to the new Porsche 911, reducing drag and cleaning up the side profile.

The rear end will mimic that of the new Mercedes E-class and CLS, with a bold move to new horizontal lighting units that flow into the bootlid for the first time in the model’s near 50-year history. This change in lighting orientation is probably going to be the biggest exterior aesthetic difference for this all-new model.

In contrast to the exterior’s evolutionary approach, the new Mercedes S-class interior will be completely new, with an emphasis on digitalisation and connectivity. The recent teaser images confirm the rumours that Mercedes will ditch the current widescreen layout that first debuted on the current S-class in favour of a vast portrait touchscreen flowing up from the centre console and onto the dash. As a result, the S-class will introduce not only a new digital interface, but also a new dash architecture and aesthetic, which will spread into other future models such as the next-generation C-class and its derivatives.

The digital dial pack will now sit separately to the main screen behind the steering wheel, where it will complement a new head-up display. Software derived from the A-class’s new MBUX infotainment system will also be incorporated, including the natty augmented reality feature that could be extended even further in this new-generation S-class.

The S-class’s powertrain options remain unknown, but expect a heavy emphasis on electrification split between mild- and plug-in hybrid variants. AMG models will also be offered in V8 form, but the V12-powered S65 won’t return thanks to the low take-up of the previous model, not to mention the pressure to reduce the company’s overall fleet CO2 average post-2021. Rather than offer an all-electric version of the next-generation S-class, Mercedes will instead reveal a bespoke electric luxury saloon under the EQS name that sits on a bespoke EV platform. As well as having its own platform, the EQS is also expected to introduce its own aesthetic, driven by radically different proportions that arise from its all-electric underpinnings.

The all-new S-class will be revealed later this summer, with sales to start sometime later in the year. As is usually the case, expect core diesel and plug-in models to be released first, with more derivatives arriving throughout 2020; the EQS is expected later in 2021.