What you’re looking at here could become the next limited edition production Mercedes-Benz G-Class. And ahead of its Geneva Motor Show debut, crankandpiston.com was invited to take it for a spin.

Let’s start with the name, the G 500 4x4Squared. As well as a reference to the bizarre yet popular 6×6 (Mercedes’ last limited edition G-Wagen that made its debut two years ago), the new 4×4 takes the underpinnings of the standard Geländewagen and – not to be too technical – makes them more badass. Under the bonnet is a biturbo V8 – the base of which is found in the new AMG GT – for more aggressive acceleration. A wider track provides superior agility on the road, while new port axles result in ground clearance double that of the production G-Wagen. The new lightweight chassis is built on that of the production series G-Class but offers new damping for both on-road and off-road manoeuvrability, ditto the dual option tyres. The new 4×4 then is essentially two vehicles in one, and if both media and customer response is positive, Mercedes will put a limited number of the squared into production.

The basic G-Class design has remained intact since 1979, and with Mercedes adamant that the ‘genes’ of the car remain the same, it’s not a radical new look from the bumpers up, save two-tone paint and carbon fibre roof and fenders. The boxy design is not the first thing that strikes me though. Nope, that would be the sheer size of the brute. Standing more than 8ft tall and kitted out with heavy duty suspension and 22-inch wheels, the 4×4 dwarves everything. So as you can imagine, getting in is a bit of a  challenge. For that you’ll need to lift your left leg onto the running board (at around chest height), hold the grab handle on the inside, and heave. To get back out again, fold your legs out, fall, and try not to sprain an ankle when you land.

It’s all the more ironic that, once you’re in, the interior design is pure Mercedes plush, complete with designo leather, something called Dinamica trim on the door panels, and a surprisingly delicate gear lever. In the back, behind the mounted mesh curtain, there’s buckets of boot space, and even though there isn’t quite the legroom I had expected from a G-Class, the ‘two cars in one’ philosophy is already starting to make sense. It’s a similar sensation when you put your foot down. 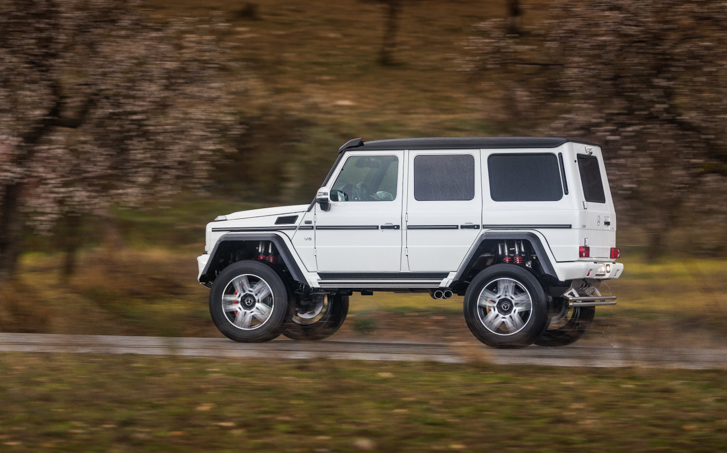 There’s not doubting that familiar AMG-esque warble at cruise, but when the 4-litre biturbo V8 is given a kick (forget the 5.5-litres the ‘G 500’ name suggests), there’s an emphatic boom that escapes the exhaust pipes as 416bhp and 450lb ft of torque is sent to the road via all four wheels. Despite weighing the best part of three tonnes this beast can shift, and will do – apparently – up to 220kph.

It’s when we turn off the highway and onto the tighter, twistier mountain roads (followed as we are by the half-bemused, half-terrified looks of our fellow motorists in their Peugeot 106s) that things really start to get interesting. Out of even the tighter corners, pull from the V8 is impressively strong, as it must be said is the seven-speed automatic transmission. In ‘Sport’ mode, pull is linear without being overly aggressive allowing us to pick up speed quickly. In ‘Manual’, changes through the paddle shifts are swift if not lightning fast, allowing me to get the G balanced through the corners, strong pull – sans turbo lag – from that V8 keeping the momentum going out the other side. I question the validity of ‘Eco’ mode though: potential customers of the 4×42 are unlikely to be eco warriors. 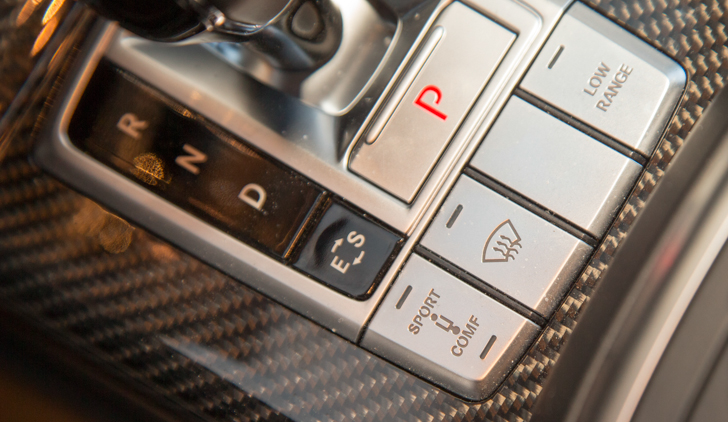 The handling meanwhile takes a few corners to get used to. Lock to lock, the sheer size of the wheels makes the steering incredibly heavy, and the turning circle that of a reasonable-sized petrol tanker. With the new dampers set to Comfort, the ride is smooth but offers little in the way of feel for the front wheels, and there are a few moments when I genuinely worry I’m either going to roll over or understeer off the road. I won’t, since the system is set to automatically change to a tauter configuration under abrupt manoeuvres, but it doesn’t give me the greatest of confidence.

With the flick of button though we’re in Sport, and it’s a completely different story (again, two cars in one). The ride jostles more at pace, but through the corners the stiffer setup offers a much-welcomed amount of agility. Feel through the steering is still a little wooly – those mammoth tyres don’t exactly help – but there’s still plenty of composure and less lean than I’d expected. Much less indeed than the production G-Class itself. Superb feel though the brake pedal and enormous stopping power from those colossal brake callipers allows me to scrub off speed without unsettling the back end: head-to-head with a hot hatch I’d still be left for dust on these roads, but perhaps not at quickly as you’d expect. It’s a seriously impressive showing from the potentially limited edition G. 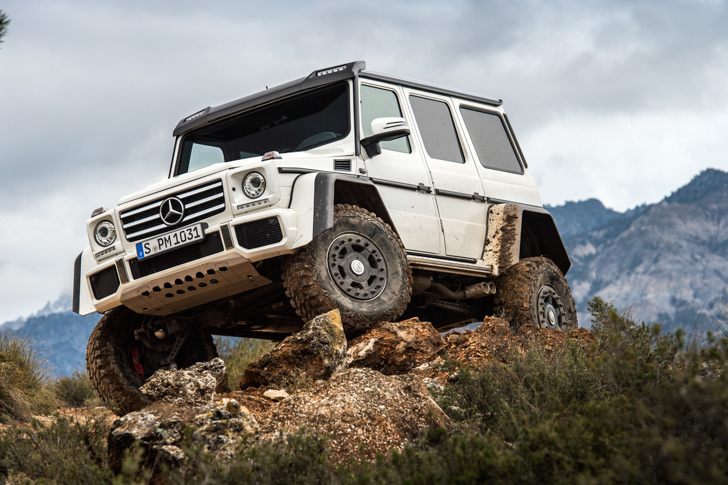 Later on during the day, our black and white test model – THE example that will headline Mercedes’ stand at Geneva – is fitted with optional 18in MT (Mud/Terrain) tyres for a spin across country, where once again the 4×42 comes into its element. There’s little we come across that the mammoth ground clearance can’t deal with, and even though I’m a little wary about clouting a shiny Merc alloy against a very big, very solid boulder, traction from the wheels means there’s little to unsettle the G: with a fording depth of one metre, even the water obstacles offer little challenge. We’re even encouraged to try our luck at a 45-degree incline, during which my kidneys are rattled out through my nostrils but against which the 4×42 still faces little issue.

The bare bones then: has Mercedes done enough to warrant a limited production run? Well, you’re likely to either love or hate the looks, the cabin can be a little cramped (surprising for such a large vehicke), and there’s a grey are between Comfort and Sport suspension that would hit the nail on the head if it existed. Oh, and the ‘G 500’ name is largely irrelevant. But quite honestly, the 4x4is a seriously cool machine, with little to fluster it off-road and a suprising amount of agility on it, a sensation complete with both V8 grunt and roar. And given the G-Wagen’s hallowed status in the Middle East, plus the number of 6x6s that have already made their way to the region, the ‘near series show car’ seems a mere formality.

Get it built Mercedes. It really is that simple.