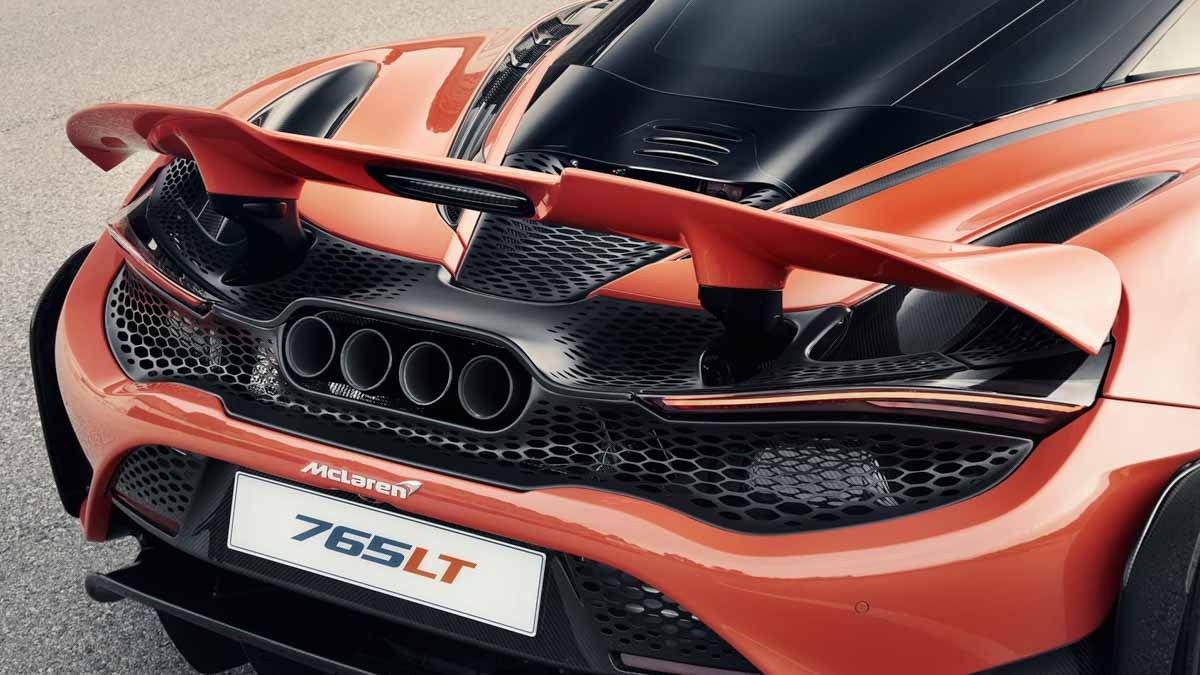 McLaren’s 765LT is the third Long Tail model from McLaren Automotive in five years, following in the Trofeo R tread blocks of the 675 and 600LT models. Both cars demonstrated how Woking is capable of stepping away from the spreadsheet algorithms, letting its imagination take hold and its engineers off their leashes. Now we can look forward to more of the same.

Limited to 765 units, the latest McLaren LT benefits from a great deal of technology developed for the McLaren Senna including some of its engine components, aerodynamic knowhow, braking technology and carbon fibre construction techniques. So while on face value this may strike many as being yet another example of a modern McLaren that only a product manager can tell apart from the last, the 765LT significantly moves the McLaren story to the next chapter.

You’ll find McLaren’s M840T twin-turbo charged 4-litre V8 in the middle of the 765LT but its forged pistons, three-layer head gasket and carbon-coated valve train followers are all from the Senna’s more highly tuned version of the same Ricardo built engine. An additional fuel pump and uprated oil pump have also been fitted, both further developments from those used on the Senna. With a recalibrated ECU and a titanium exhaust reducing back pressure, the 765LT produces… 754bhp (the 765 name relates to the car’s PS output) and 590lb ft or torque.

The seven ratios inside the dual-clutch gearbox have been optimised to suit the 765LT’s new found performance, from both the engine’s increases and the car’s 80kg weight saving, with in-gear acceleration times improved by 15 per cent. It also means the standing start times fall, with 100kph arriving in 2.7 seconds and 200kph in 7.2 seconds.

McLaren has also introduced a new ‘limit downshift’ function to its gearbox. This new piece of tech now allows you to downshift regardless of if this will result in an engine over-rev, the software acknowledging the downshift and allowing the engine to momentarily ‘bounce’ off the rev-limiter before selecting the next gear when engine and road speeds are better matched.

McLaren’s Proactive Chassis Control II underpins the 765LT, although considerable work has gone in to reprogramming the software to suit the car’s weight reduction and improved performance.

The ride height is 5mm lower at the front and the front track is 6mm wider. The main springs are lighter, built to a new spec and now also feature additional helper springs. These are designed to maintain load in the suspension during full rebound while also reducing unsprung mass and increasing roll stiffness. The steering ratio is also quicker.

Aerodynamics, as with previous LT models, also play a significant role in the 765’s setup. There’s an extended front splitter with the front of the car now 48mm longer (the rear 9mm longer), unique door blades and an extended rear diffuser that sits below the larger active rear wing that sits 60mm higher when in its static position. Combined, these features help increase the 765LT’s downforce by 25 per cent over a 720S.

That active rear wing also works as a cooling aid to the engine by drawing hot air out from the engine bay. Just as the rear wing acted as an air brake on the 675LT, it does so here, with rear downforce increased by 60 per cent when it’s activated. Other functions of the active wing are to provide more downforce when the car’s ‘Active’ control is selected as well as a DRS function when the car is accelerating in a straight line.

Pirelli has developed a new Zero Trofeo R tyre for the 765LT and these are mounted to a set of ultra-lightweight forged alloy wheels, saving 22kg over the regular 720S wheels and tyres.

Brakes are a mix of McLaren’s latest carbon-ceramic discs combined with the callipers from the Senna and fitted with bespoke pads for the 765LT. McLaren claims the brakes are 60 per cent stronger than conventional carbon ceramic discs and thanks to a new integrated calliper cooling system inspired by the company’s F1 team, brake pad temperature is reduced by up to 50 degrees during track driving.

As you’d expect from a McLaren LT, weight saving has been a priority with 80kgs removed from the car over a 720S. The big gains come from those lightweight wheels and the race seats that have been donated from the Senna. Then an additional 14.3kg has been saved due to a lighter single piece carbon fibre floor, elongated front splitter and bumper, side skirts, rear bumper, rear wing and the rear diffuser. A further 6kg is saved by using lightweight glass for the side windows and polycarbonate for the engine cover.

The titanium exhaust, which weighs just 10.9kg, is 40 per cent lighter than a comparable steel unit and 3.8kg lighter than the system fitted to the 720S. The weight saving continues inside with carbon fibre used for every conceivable surface and switch. To reach the 765LT’s lightest weight – 1229kg dry – you’ll need to specify the optional carbon fibre race seats first fitted to the Senna.

McLaren hasn’t confirmed a price yet, but expect little change from $360,000… As for rivals, the Woking based manufacturer benchmarked Ferrari’s 488 Pista, Porsche wild 911 GT2 RS and Lamborghini’s Aventador SVJ.