Now 50 years old, the Ford Mustang has undergone a complete refresh, and it’s now available worldwide for the first time. So how will the newboy fare against its old sparring partners?

Life is full of certain incontrovertible facts. Night follows day, as pepper follows salt. Kanye West will someday be punched incredibly hard in the face, and as a result the internet will be irreparably broken. And if you want to buy a contemporary muscle car, your choices boil down to the Chevrolet Camaro, the Dodge Challenger, and the Ford Mustang.

Having started America’s love affair with the pony car a little more than 50 years ago, and with the ‘15 Mustang having recently arrived in the Middle East after its launch last September, it’s no real surprise that the Blue Oval’s performance headliner is drawing most of the attention on today’s group test (not just from the crankandpiston.com crew itself, but from our fellow motorists as we head for our photoshoot location in Liwa). Indeed, the GT marks only the sixth time in five decades that the Mustang has received a clean sheet re-design, a move driven by Ford’s desire to attract a more global customer base. Hardly surprising then that some considerable work has been done beneath the beltline.

Lift the bonnet on our test model and we find a 5-litre V8 pumping out a typically muscular 435bhp and 400lb ft of torque. One snorting eight-cylinder unit doth not a ‘wider array of customers’ make though, so alongside this slides a slightly less aggressive 300bhp 3.7-litre V6 and, given the globe’s current eco kick, a brand new 310bhp 2.3-litre Ecoboost four-cylinder. Raw power alone is not what the sixth generation Mustang is about. Indeed, beneath the sharp new looks – that include sleeker headlights, more subtly sculpted bonnet grooves and a more delicate short rear deck – lies a stiffer chassis, all-new independent rear suspension, and both a lower and wider stance for improved handling relative to its predecessor. 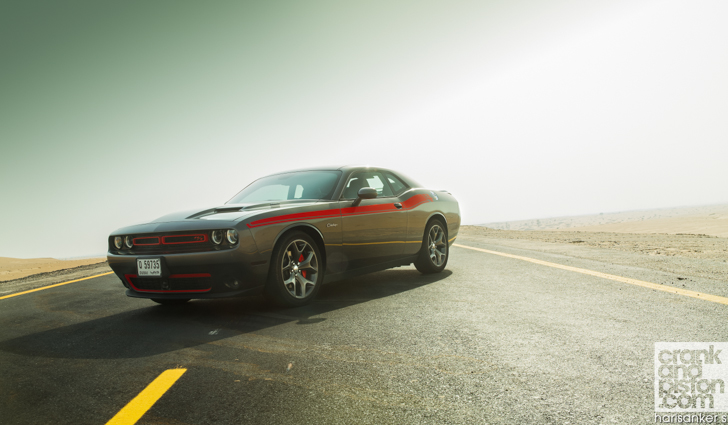 Though not as extensively overhauled as the Mustang GT, our Challenger R/T test model meanwhile brings a revised appearance, larger brakes, an electronically controlled exhaust for a more resonating soundtrack, and 20in performance tyres to the table for 2015. Oh, and power too. Quite a lot of power. It doesn’t quite touch the stratospheric madness that is the Hellcat’s 707bhp rating, nor does it top trump the Mustang or Camaro SS, but Dodge’s 375bhp 5.7-litre V8 (with Mopar intercooler) is far from slow: 0-100kph, thanks in no small part to 400lb ft of Mustang-equalling torque, is achieved in under five seconds.

By comparison, it’s been a while since the Camaro SS received its brand new head and taillights. Indeed, given the imminent arrival of the 2016 Camaro, the SS joins our group test as the underdog. The fifth gen model is not reaching for the carpet slippers just yet though. For one, the 6.2-litre V8 behind that angry visage produces 400bhp, 410lb ft of torque, and is essentially the same unit (sans supercharger) that powers the maniacal ZL1, from which the SS also pilfers suspension components, a close-ratio six-speed transmission, Recaro seats and those evil-looking bonnet vents. There’s still plenty of fight left in the oldest model here today.

But it’s the Ford I make a beeline for first. Indeed, upon depositing myself in the driver’s seat, I’m quite taken aback, offering as it does bags of room alongside a fine mesh of retro and contemporary styles. The silver switches on the centre console are a nifty new addition, as is the carbon fibre look upholstery, complete with a ’50 Years’ badge in honour of the Mustang’s arrival in 1964. Even the sport seats are comfortable. The silver stallion, a hallmark of Mustangs past, retains its pride of place on the remodelled steering wheel. Throw in fine build quality alongside this strong design, and it’s the best Mustang cabin we’ve seen yet: indeed, what had established a reputation for blue-collar rawness back in the 1960s could unapologetically stand alongside coupes from BMW and Audi. 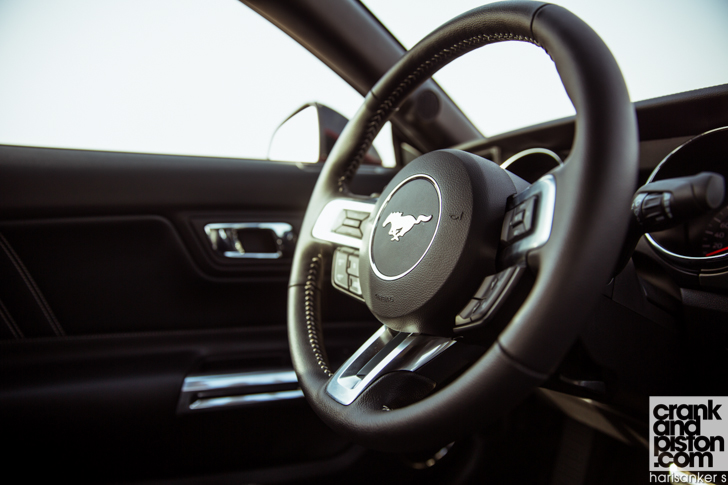 It’s the delicacy of the steering wheel though that strikes me. Despite the plethora of buttons, it’s surprisingly elegant to behold and use. Which proves rather an apt metaphor for the Mustang itself. Don’t get me wrong. Power from that V8 is beyond plentiful, and the GT – boasting a kerb weight significantly lighter than both the Camaro and Challenger – is more than capable of outsprinting both its arch rivals. While that in itself is cause for celebration back at Detroit GHQ, it’s the manner in which this performance is delivered that truly surprises.

True, the Mustang’s initial bite of momentum is abrupt and accompanies a rich, basey soundtrack, but the wide torque band means that rather than offering an initial burst of gut-wrenching power, acceleration is surprisingly linear. Impactful yes, and with the same sense of occasion a model built on a heritage of standing quarter miles would imbue. But it’s a far cry from the great wave of raw, visceral fury emanating from the Challenger R/T. Plonk the right hoof in the Dodge and you’re met with a sonorous V8 roar and a spike in momentum, which continues to pull strong in the lower revs and abate slightly the further up the rev range we go. At which point, the Mustang’s V8 is still pulling, not even close to running out of steam. It’s an intoxicating yet slightly unnerving experience, the innate muscular fury of the Challenger completely at odds with the almost relaxed – but no less rapid – composure of the Mustang. Not adjectives I’d expected to describe a contemporary ‘muscle’ car with today. 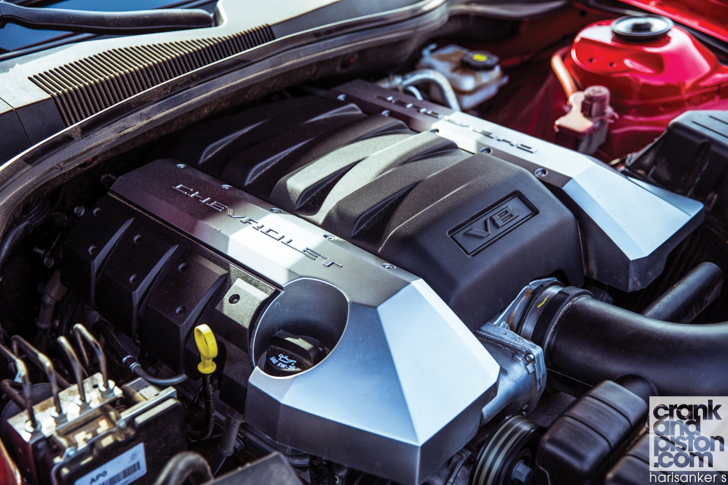 Ironically, in the Camaro SS, the opening lunge is rather restrained: I wouldn’t dare say ‘sluggish’ since this is a vehicle well capable of 0-100kph in 4.8 seconds, but against its rivals the initial bite of acceleration isn’t anywhere near as aggressive. Out of the lower revs though, the V8 really begins to stretch its legs, its initial (comparative) lethargy swept completely under the rug in a wave of aggressive punch and a pure eight-cylinder battle cry. Granted the six-speed Hydra-matic may be a little dated, but upshifts are still wonderfully swift, each unleashing neck-straining pull. Keep those 6.2-litres in the high revs and they’re superbly engaging.

Not just on the straights either. On the more winding stretches of road we come across, the Camaro is just itching to be hustled. Even with that mass lump over the front axle (the engine, not those enormous hood vents), the balance is still very good. This is particularly impressive, for the combination of that enormous bonnet and short overhangs at the rear create the illusion that you’re driving whilst sitting on the rear axle. Granted, into some of the heavier braking corners, the rear end can squirrel as lateral weight transfer takes hold, and little travel in the brake pedal – plus a rather mushy sensation at the top end – means nailing braking points can be tricky.

Nevertheless, despite the raw power delivery, on the twisties the SS asserts itself as much more than a drag race special. The low-slung profile means body roll is rarely a factor through even the longest sweeping turns, a super stiff chassis and good weight distribution allowing the Chevy to corner flat. And even despite the sheer size of the bonnet, connection to the front wheels is pretty intuitive, thanks in no small part to those grippy front tyres. Meanwhile weighty, well-balanced steering offers immediate feedback to the front end, even if the feel of the faux-suede steering is not my particular cup of Darjeeling. 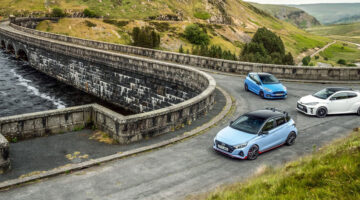