A word on the Chevy’s suspension at this point too: taut certainly, and one does wonder how effectively the SS would handle a track day (we’re guessing rather well), but said setup does dilute the ride comfort. The weathered look of the interior – particularly compared with the Mustang – after years of service means the design is due a refresh. And I realise I’ve dusted off this chestnut a few times now, but while that sleek roof may give the Camaro its menacing, hunkered good looks, it doesn’t offer my six-foot frame much headroom either.

Of course in the Challenger this issue is moot, the R/T being longer, wider and taller than both of its rivals and, as a result, easily the most civilised. The R/T embroidered seats for instance offer the best lumbar support, and while they’re quite stiff, they are deceptively comfortable. There’s also bags of headroom, solid build quality, and a driver-focused cabin that inches almost threateningly towards being claustrophobic thanks to the high-rise transmission tunnel. Almost. The elongated and widened stance also marks a huge improvement over the Challenger’s predecessor through the corners. Granted the sheer weight on the front axle, the higher centre of gravity and the shift in momentum through the turns that this produces means bodyroll in the R/T is greater than either the Mustang or the Camaro: on some of our higher speed runs, my heart rate does spike as I find myself working hard to keep the Challenger reigned in.

Still though, the balance is impressive, particularly when powering out of turns. Plant the right foot and the sense of urgency out of the corners is spellbinding as 375bhp is sent to the rear wheels via Dodge’s eight-speed TorqueFlite transmission. Swift changes through the sawn-off paddles (which I never find particularly comfortable to use) bring with them a tangible rock of momentum and the explosive sense of drama that goes with it, even if several downshifts in succession can confuse the ‘box a little. The Camaro might have mullered the corners more effectively than the Challenger, but the punchy acceleration and hair-raising bursts of speed on the straights means adrenaline in the R/T is beyond belief. 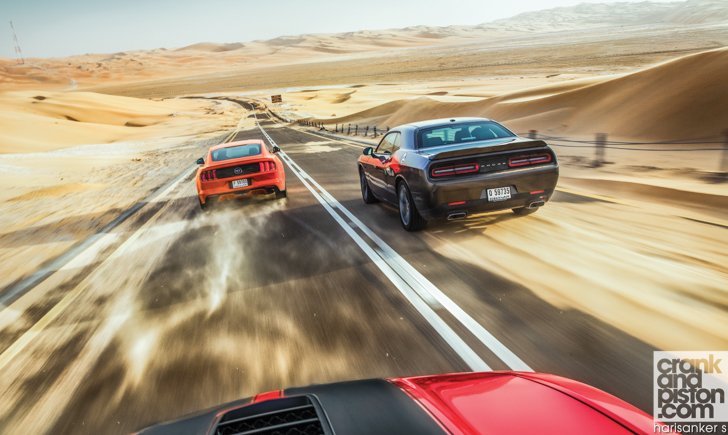 Which brings us back to the Mustang, described by Ford itself to be ‘the most nimble pony ever’. And there’s little doubting that. It’s good. And I don’t just mean with the customary ‘for a muscle car’ precursor. I mean, the Mustang GT is SERIOUSLY good. Like the Camaro and Challenger before it, the Ford holds a sizeable weight over the front axle, but in the GT it’s considerably less intrusive. Even at full pelt, weight transfer corner-to-corner is remarkably subtle, the balance from that super stiff chassis neutering any potential understeer. Even through the more insanely wide and sweeping turns, there’s little threat that the back end will snap, the front end will let go, or that I’m about to be punted through the passenger window in a spasm of bodyroll. Boasting the lowest centre of gravity of all three and the best driving position too, the Mustang is a seriously impressive hustler.

Take the steering for instance. Okay, regardless of driving modes, it doesn’t offer quite the feedback or weight as we find in the Chevrolet. But the delicacy with which the front wheels can be placed makes this immaterial, the reworked suspension keeping the body flat through the turns. Pokes of momentum start emanating from the rear wheels, hinting that they’re about to break traction, although the sense of confidence they imbue rarely makes this a major cause for concern. To drive at speed is astonishingly easy in the nimble Mustang.

And it’s as I sit in the redesigned Ford cabin, considering which contemporary muscle cars fans of the segment might actually buy, I wonder if the Mustang makes the grade. 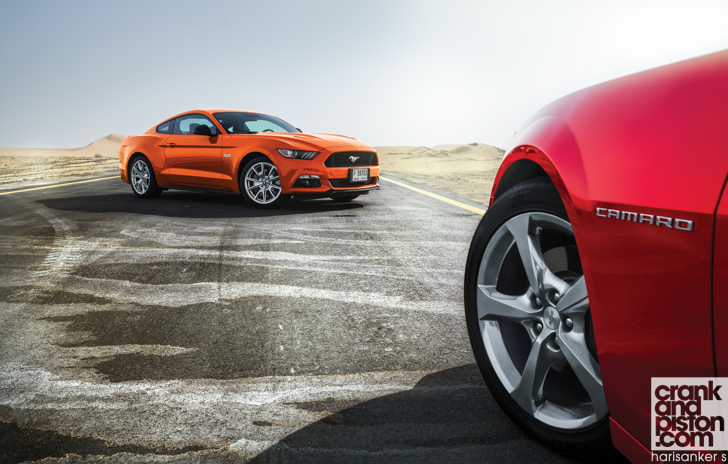 Alongside its main rivals, the Mustang is technically the best: it offers a more elegant design, more room in the cabin, a higher quality of materials, and also – critically – better road handling. Even with its ‘muscle car’ hat on, it still beats both the Camaro and Challenger off the line. And yet in offering a greater agility through the turns and a product more suited to day-to-day civility, the uncomplicated fury associated with the muscle car segment has been lost somewhat with the new Mustang: I can’t imagine diehard muscle car fans being overly thrilled that their big, brash V8 ‘monster’ can comfortably house two golf bags in the boot. In its advanced state, with new independent rear suspension, a tauter chassis, greater power-to-weight ratio and configurable driving modes, the Mustang has moved away from the traditional idea of a muscle car towards that of a conventional sports car. Which is not a bad thing, certainly, but does make that muscle car moniker harder to swallow.

By the comparison, performance in the Challenger R/T is as you would expect from any self-respecting muscle car. Handling through the corners is solid rather than spectacular, but it’s the drama under heavy acceleration that really makes the R/T experience, and indeed – coupled with that truly astonishing V8 soundtrack – a sensation sadly missed in the more sedate Ford. Likewise the Camaro, though not quite as dynamic from the off as the Challenger, brings a deliciously aggressive spike in acceleration when you commit to those high revs. Like the Mustang, the Camaro’s handling is impressive, but in a manner less composed than the Ford, giving an impression of barely controlled fury that at any moment could bury you in the wall. It’s a far cry from the Mustang’s poise and agility, albeit one perhaps not as innate as the Challenger. It’s just more…’muscly’.

Where you stand on the issue really rather depends on your priorities. In searching for a driver’s car to thrash through the mountains offering beautiful handling, an awesome V8 soundtrack and a sense of history, one could do a lot worse than the new Mustang, a model incomparably better than the generations that came before it. But for a sense of uncomplicated energy, fast acceleration with an ear-thumping soundtrack, and a muscle car in the true sense of the word, it has to be the Challenger R/T.