I didn’t think driving a MINI ALL4 Racing Dakar Rally car in Dubai would be among the easiest things I did today. As it turns out, what lay in store would be amongst the most mentally taxing activities of my  life.

Regular readers may remember that last year, my crankandpiston.com colleague James was invited by MINI to drive THE 2014 Dakar-winning Monster Energy X-Raid Team ALL4 Racing. Second time around things are a little different, since this year – having again acquired one of the limited spots available to media worldwide – we would experience not only life behind the wheel but also life as a co-driver, one of motor racing’s most overlooked yet vital roles. Though Stéphane Peterhansel, Joan ‘Nani’ Roma and Qatar’s Nasser Al-Attiyah made headlines across the globe with their victories from 2012 to 2015, none would have been possible without the co-driving expertise of Jean-Paul Cottret, Michel Périn, and Mathieu Baumel respectfully.

First up though was a spin in the formidable ALL4 Racing. Comparisons with the John Cooper Works Countryman are inevitable, yet the two share little besides headlights and the MINI emblem. The ALL4’s CP Autosport chassis is nine per cent larger than the Countryman’s, while the Dakar package incorporates a six-speed Sadev sequential gearbox, an AP Racing clutch, Xtrac front and rear differentials, massive 245/80 R16 All-Terrain Michelin tyres (of which it carries three spares) and a 385-litre endurance racing fuel tank, yet somehow still weighs less than a Maserati GranCabrio MC. Up front is a 3-litre TwinPower turbo diesel that pushes 320bhp and ‘approximately’ 590lb ft of torque. It’s a package that since making its debut in 2010 has taken three FIA World Cup for Cross-County Rally championships, costs an eye-watering $1.4 million, and is a significant reason why MINI will compete on the Dakar past 2017. Hopefully that sums up the incredibly – INCREDIBLY – valuable package that is being left entirely in my care, albeit one overseen by two-time Dakar winning co-driver Andreas Schulz.

There’s no point beating around the bush, the ALL4 Racing – once I’ve squeezed my 6’ 6” frame around the rollcage and into the Recaro driver’s seat – is the most incredible machine I’ve ever driven, or indeed am ever likely to. With Andreas’ invaluable assistance floating through the on-board intercom – by which we’re both connected via our helmets – I’m into fourth gear and up to triple figures on the loose surface before I even have time to make myself nervous (though fourth gear is as far as I dare go). The suspension, designed for pummelling the changeable landscape across Chile and Bolivia and Argentina, is astonishingly soft, the ride – give or take the occasional jarring thump – impressively smooth. Ditto changes through the Sadev box and acceleration from the TwinPower diesel, the latter of which I’d expected to be ferocious. And yet pick-up is surprisingly linear, the pull constant and showing no traces of lag, but linear nonetheless. Those enormous tyres and softly sprung suspension make feedback through the steering wheel hard to gauge, but grip at the front is immense even as the rears step out as we hit the softer sand, and only the occasional unsighted dip leaves me truly wide-eyed. It sounds ridiculous, but I’m amazed by how, well, easy the ALL4 Racing is to drive.

Within the hour though, I’m brought back to earth with a  bang. De-helmeted and now in the driver’s briefing, I’m introduced to Michel Périn – four-time Dakar winning co-driver in his own right – who will be walking me through today’s navigation course. One of Michel’s preferred expressions from the day – “accuracy is the key to success on the Dakar” – strikes a particular chord when our Road Book for today is placed in my hands. So crucial is the Road Book to any endurance rally success – more so even than the GPS – that planning and preparation begins nearly seven months before the green flag drops, and is only delivered to competitors two months beforehand.

“First, I start by checking if the binding is okay. Sometimes it isn’t properly tight, which means you could lose five or six pages.” Sound reasoning, and I dutifully check my binding with a tug. I’m also encouraged to check that every page of the Road Book is there, another potential pitfall. Again, all is well.

With the basics established, we’re into the modification stage whereby updates on terrain and weather changes on each stage are shared between the competitors and PC Course, or race control. If meticulously done, this should take around an hour, though fortunately we fast-track this process given time constraints on the day. A running total is made of the kilometres left to travel at the end of each page before we dive into the epileptic nightmare that is colour coding our course notes: Orange signifies ‘danger ahead’, Red a short distance between notes, Blue highlights the direction of travel, Green signifies a waypoint, and Yellow accentuates more detailed explanations. By the end of our lesson, my Road Book has been completely transformed, the colour coding – though a sight – making it much easier to tell each point apart. But this is in a Bivouac tent, at a desk. How exactly will this translate when we’re at speed? 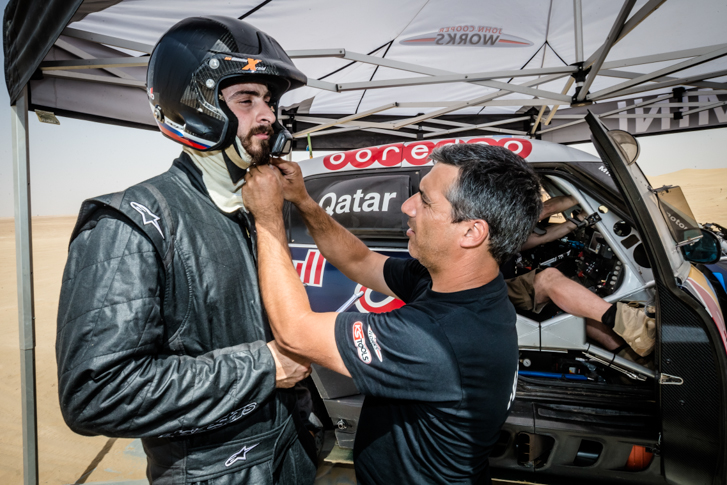 Having swapped the driver’s seat for that of the passenger, I clamber aboard X-Raid’s Qatar Rally Team MINI, wait as Miguel and Michel snap my six-point racing harness shut, and shake hands with Qatari driver Nasser Al-Attiyah. For the next 15 minutes, I – and I alone – will be his co-driver as he attempts to cover the ‘Adventure Area’ as fast as he can.

This has suddenly gotten serious. Nasser, as well as being an Olympic Bronze medal-winning skeet shooter, is a two-time Dakar rally winner, his second coming in this very machine just a few months before today. He’s the reigning WRC2 Word Rally Champion, a former FIA World Cup for Cross-County Rally winner, and a ten-time Middle East Rally Champion. Behind the wheel and on this terrain, he knows exactly what he is doing and what to expect from his co-driver. My earlier confidence has started to wain.

It erodes altogether as Nasser buries the throttle and powers the ALL4 Racing into the first part of the course. Throughout, Nasser’s eyes will be fixed firmly on the route ahead (taking his eyes off the route on the Dakar is an accident waiting to happen), so my instructions through the intercom must be clear, concise, and – most importantly – accurate. I don’t get off to the best start.

Nasser is soon into sixth gear and up to a fantastic speed, the reverberations through the cabin much more aggressive than earlier. As a result, I’m having great difficulty keeping my Road Book still enough to read, and immediately misread the first direction. Fortunately Nasser has driven this route enough times today to know where he should be going, but if this had been a real competition, this one tiny mistake could have dropped us hundreds of kilometres off-route, not something you want to do on one of the most dangerous motorsport events in the world. 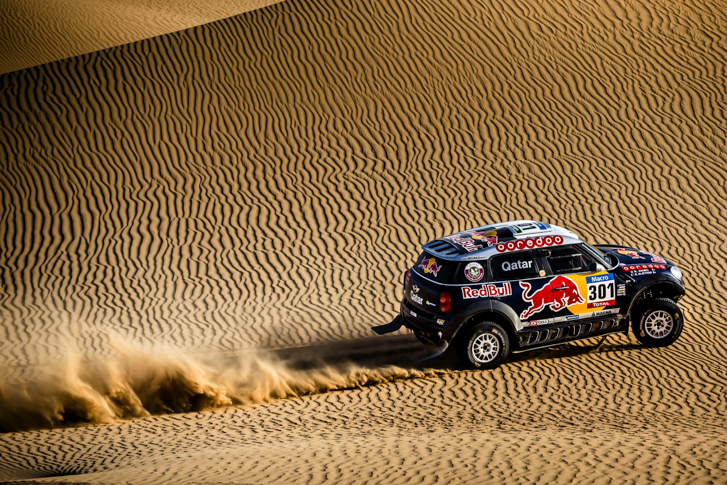 Annoyed by my early mistake, I panic and try to feed Nasser his instructions too quickly, an error that once again he has to correct. To make matters worse, I’m having difficulty turning the pages of the Road Book with my racing gloves on, the vice-like grip I have on both it and the roll-cage to stop my kidneys rattling through my nostrils probably not helping.

This is becoming stressful. Properly stressful, and we’re barely 5km into the route. Oh God, the second page has even more greens, blues and oranges than the first. For God’s sake concentrate man. Concentrate…

There are another few stumbles before – finally – I get one of the notes correct, the “yeeeeeess, well done” from Nasser through the intercom confirming this. I get the next one right too, and the one after that, this despite the fact that the route is getting trickier and we haven’t slowed down. As well as keeping one eye fixed on the Road Book, I’m having to gauge and feel the terrain around us, looking ahead to waypoints and other distinctive landmarks so I can feed Nasser his instructions as he needs them, which is basically as he’s barrelling into corners at up to 178kph. I’ve even let go of the roll cage to make sure I’m concentrating fully. Kidneys be damned.

It’s not hard to understand why Nasser is one of the hottest cross-country rally drivers on the planet, since the man seemingly has no fear. At my comparatively pedestrian pace earlier on, the tiniest of crests had been taken with extra care for fear of binning the ALL4 Racing into a sand bank. Nobody seems to have mentioned this theory to Nasser though, or if they have, it’s clearly not his style. The speeds we’re hitting are simply ridiculous, the manner in which Nasser works the sequential gearbox and the throttle almost poetic in its effectiveness as the MINI bounces from crest to crest rather than gingerly teetering over them. And Nasser doesn’t use the brake. At all. On the approach to – through my eyes at least – a completely vertical wall of sand, he guns it, only lifting when we reach the summit and when the only thing we can see through the windscreen is sky. That is until we begin our descent, sky rapidly turning to sand (a lot of sand) as the ALL4 Racing slams back to earth, little regard given to the seemingly indestructible suspension. 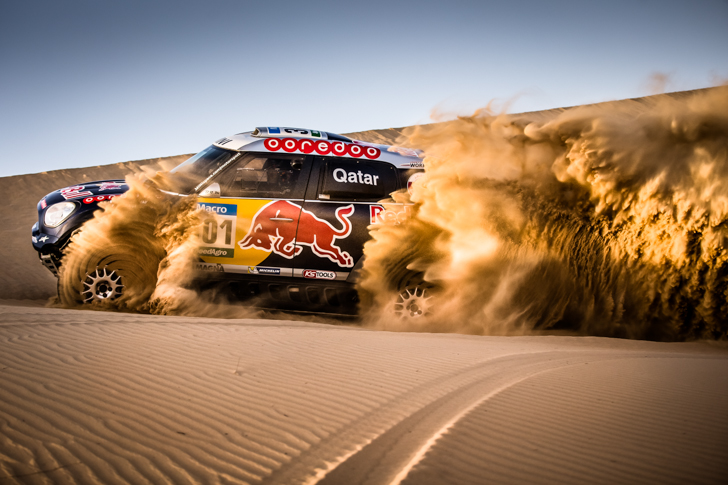 Of course this is all speculation, my eyes either widened with shock or slammed tight shut awaiting impact to be of any help whatsoever. There really is no terrain, as far as I’m concerned, that this formidable machine cannot handle. And the same goes for Nasser. I truly am in the presence of greatness.

There are a few more trip ups (Nasser once again reacting accordingly) with the Road Book, but I eventually find my rhythm. And it’s absolutely exhausting. Our run lasts barely 15 minutes but the concentration required to follow the course, the Road Book AND keep myself just ahead of Nasser on the route is mentally draining. I can only imagine the almost superhuman effort required to do this for up to nine hours a day across 14 days and 9111km whilst battling the heat and sleep deprivation. I don’t think Michel Périn need worry about his seat, and nor – given the spectacular speeds he’s managed to hit during our run – should Nasser.

I’m humbled completely totally and absolutely as I step out of the ALL4Racing. I had been naïve enough earlier to think that endurance rallying might – I stress MIGHT – not be quite as gruelling as I’d expected. I was wrong. VERY wrong, as the sublime talent of Nasser and Michel has demonstrated. Theirs is a skill and commitment-level I can only hope to match, though ultimately never will.

You probably won’t see my name – as a driver or co-driver – on next year’s Dakar entry list. 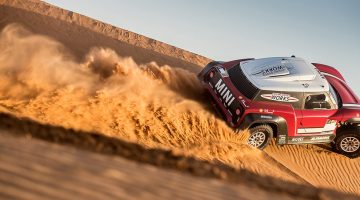