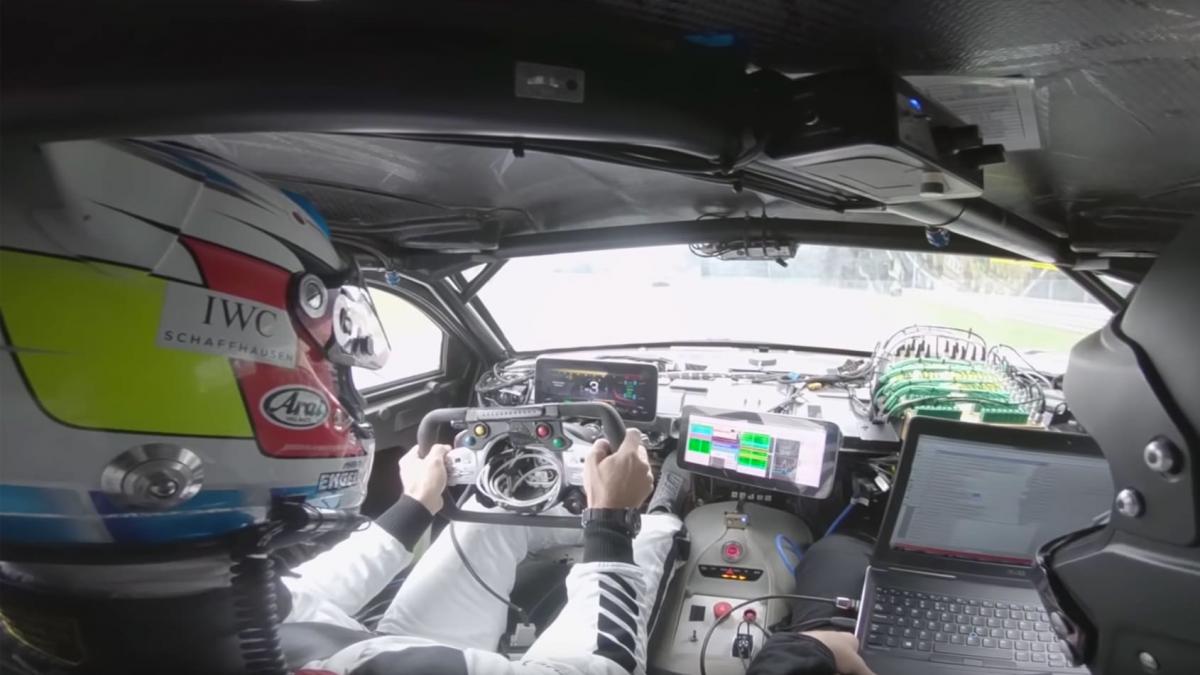 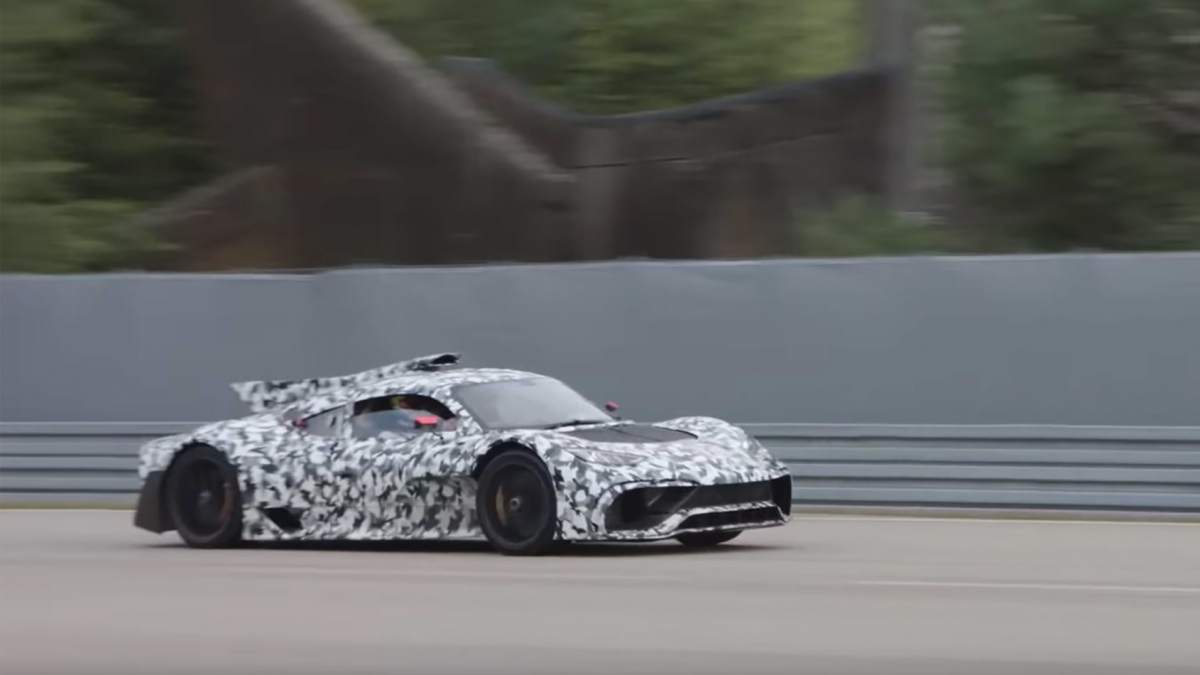 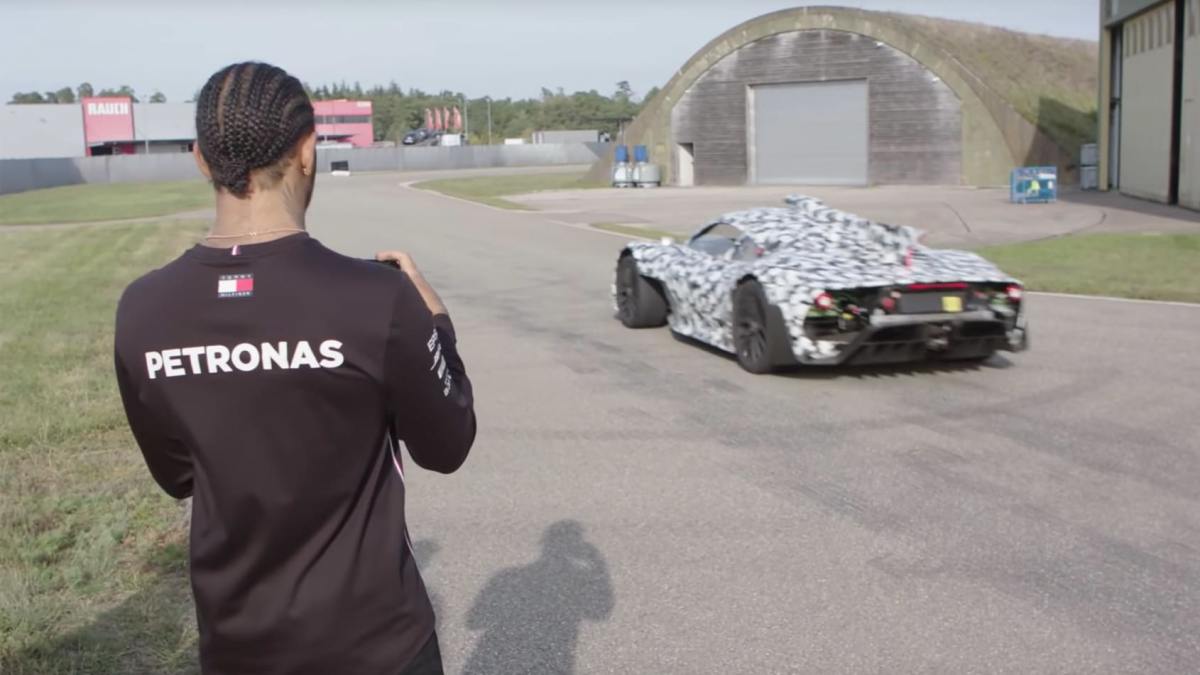 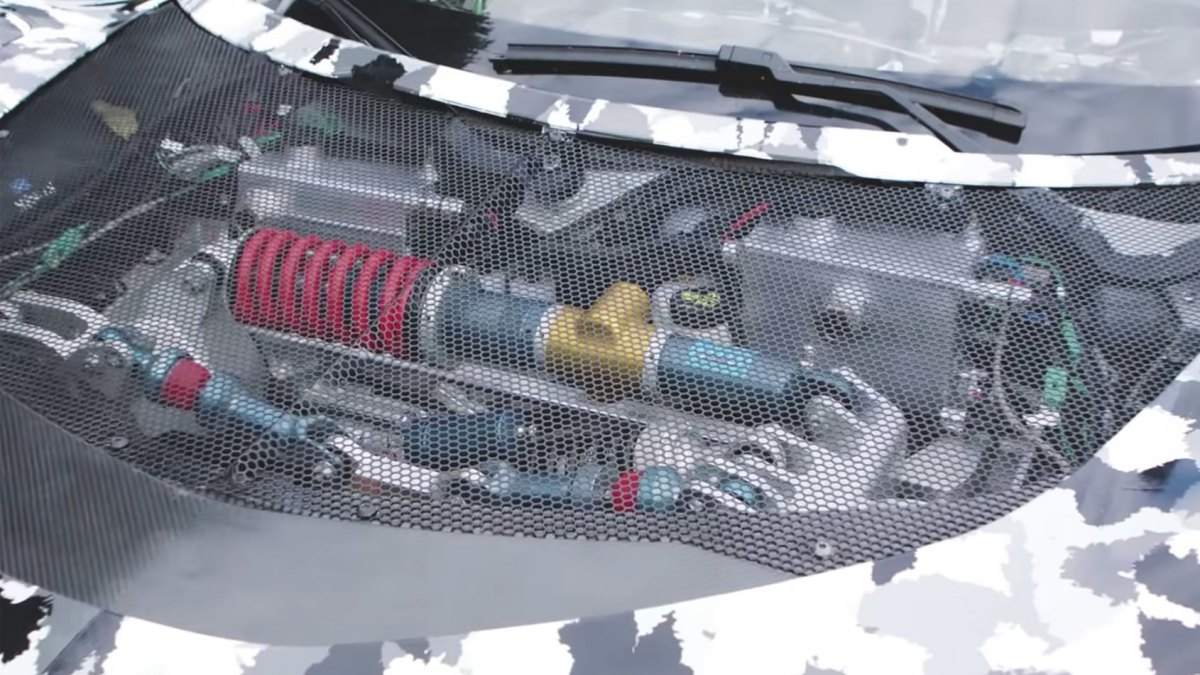 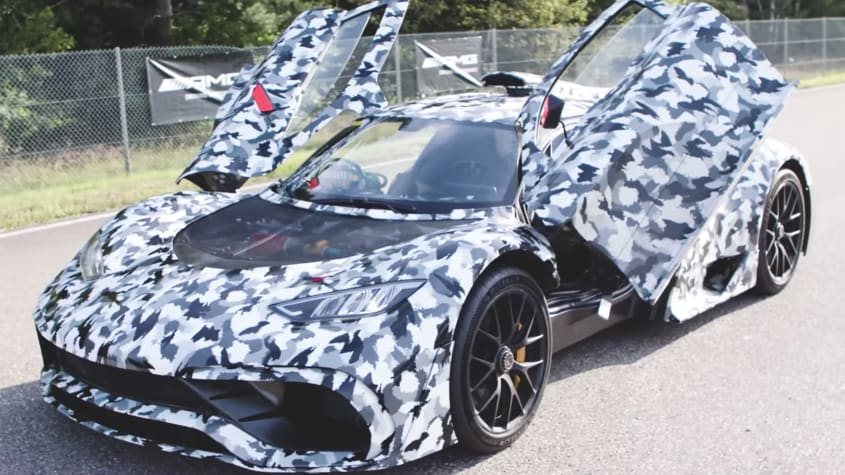 More than two years after Mercedes-AMG’s One hypercar was revealed, the first footage of the car on track has been released – and shows Formula 1 World Champion Lewis Hamilton looking on from track-side. Although the mule is still under heavy camouflage, the film gives us our first proper look at the car in motion, both inside and out.

The new video doesn’t reveal many details about the car, but it offers a tantalising look at some of the model’s underlying componentry, and a few sound clips of the hypercar’s F1-derived powertrain. This comes shortly after Aston Martin posted a similar video of its V12-powered Valkyrie, testing at the brand’s Silverstone facility.

As part of the drip-feed of information on the One, last year Mercedes-AMG released images of the car displaying its active aerodynamic functions, the most dramatic of which were the vents above the front wheels: four panels on each side of the car’s front clam hinge upwards to create what look like gills behind the headlights.

These details are just the tip of this technological iceberg, so keep reading to find out everything you need to know about the Mercedes-AMG One.

As you might expect, all-wheel drive plays a part, delivered and intelligently vectored by an electric motor in each front wheel. But let’s start with the game changer at the back. As with the current Mercedes F1 car, the rear wheels are driven by a turbocharged 1.6-litre petrol V6 with direct injection and, for the sake of longevity, an 11,000rpm red line – dialled down from the 13,500rpm Lewis has to play with but still vaguely nuts compared with anything even the driver of the most hyperactive hypercar is used to.

A strategically tamed WO8 motor, then? Not exactly. AMG calls it a ‘bespoke unit’ that marries elements from WO6, WO7 and WO8. The engineering is exactly the same, though. Air is fed into the engine by a combined mechanical and electrically-driven turbocharging system with the exhaust turbine located near the exhaust and the compressor near the roof-mounted air intake. They’re joined by a long shaft to which is connected an 80 kW electric motor. This primes the turbocharger to eliminate lag and, according to AMG, gift the V6 faster responses than a naturally-aspirated V8. The electric motor also recovers waste exhaust energy which can then be used to replenish the hybrid battery block or directly drive the MGUK.

MGUK? It stands for Motor Generator Unit Kinetic, another electric motor positioned on the side of the crankcase and directly connected to the crankshaft. It can either drive the crankshaft, adding 120 kW to the power tally, or be driven by it. AMG claims that the combined petrol-electric elements working as a complete unit achieve an unprecedented thermal efficiency of around 40 per cent against a norm of 30-32 per cent. It’s as close as you’ll get to guilt-free 1000bhp+ motoring.

Sitting behind the engine an all-new 8-speed, single clutch, transmission and, above that, the exhaust system which, unlike the F1 version, has a silencer and catalytic converter but retains the single tailpipe.

Not strictly up for discussion on this ‘powertrain reveal’ but the suspension system will have race car style, horizontally packaged, pushrod dampers, a carbon tub, carbon ceramic brakes and, of course, active aero.  But perhaps most remarkably of all, AMG reckons One owners will be able to drive their cars for 50,000km rather than after a brisk trip around the houses in Monaco before the first ‘revision’ is needed, which means removing the engine and transmission and taking them apart to see what’s been going on, just like a race car. But given the evidence that hypercars tend to accumulate quickly-covered kilometres at a leisurely rate, the 50k day can probably be put off for a couple of years at least. So thank goodness for the stress-easing effect of that 11,000rpm red line.

As One is still undergoing fine tuning in simulation phase, no prototypes have been built yet, save for a mule running the EQ Power+ pack. But  AMG is already talking up what One will be capable of. For instance, it will have better traction than a Mercedes F1 car. ‘Good for perfect acceleration and record lap times, especially the Nordschleife.’ That will be something to see.

Tobias Moers opens up on the One in Geneva

Alongside the launch of the GT Concept, evo quizzed Mercedes-AMG CEO Tobias Moers on the other car we’re awaiting with bated breath – the One hypercar.

How is the project progressing?

‘We have a combined team with Brixworth [Mercedes-AMG High Performance Powertrains], as we have a lot of experience on the emissions and OBD side. We’ve also just invested in a new [test] bench, and will run the first things there at the end of March. We’ve learned a lot as well! So far I’ve only driven it on the simulator – on the Nordschleife – but we’re going to be on the road with the car by October.’

‘I wouldn’t do it with a V8 or V12: we could do it – call it “old school” –  but for us to define the future with it would not be feasible. Having the most efficient powertrain was the key for me calling Andy [Cowell – MD at Brixworth] and asking him [if it was possible] before I brought the idea to the board. The board has confidence in Andy and I, so we got the sign off. We are close now to four digits for prospects and only 275 cars – our customers want something special, they want new technology.Mercedes’