We cannot display this galleryThere’s a sense of relief as I peel back one of the dihedral doors, slide beneath the trailing edge and position myself in the awaiting carbon fibre-shelled bucket seat. I had worried that the interior, one of the finest the motoring world has to offer in my opinion, would also have gone under the surgeon’s lightweight knife, and I’m relieved to see this isn’t the case. The alcantara upholstery remains as does McLaren‘s revised infotainment system, the overall civility consequently unchanged: during the run back to headquarters in Normal mode, engine roar is ample but not deafening, the ride quality supercar stiff but not unduly so, and the supportive nature of the seats impressively comfortable for a $393K P1. In an effort to emphasise its ‘track-focused’ nature, air conditioning has been given the boot, though fortunately remains on our test model as an optional extra. Perhaps – PERHAPS – the comfort is not quite up there with the 650S, but given the performance capabilities of the 675LT, it’s a superb balance.

As I peel onto our test route, both the drivetrain and handling are already in Sport mode: there’s only a few hours before traffic begins to amp up on the mountain and I’ve no interest in messing around during my first run. Such is the level of finesse McLaren ladles into its products, it’s tempting to jump straight in at the hairy-chested Track end. Common sense prevails though, and it’s not like McLaren’s Sport mode has ever been less than scintillating. It’s a worthy starting point.

“I peel back one of the dihedral doors and slide beneath the trailing edge. The sombre silence is ripped asunder by the roar of the McLaren V8”

Acceleration is as you would expect from Woking, namely ceaseless.  Typically McLaren,  the acceleration is both visceral in its sharpness yet boasts an underlying civility: the revs tick by with almost metronomic precision  on the run to a heady redline, but there’s no brusque sense of violence or lingering fury from the V8. There’s progressive –  seemingly endless – pull, but one conveyed with the agility of a surgeon’s knife rather than a savage blow from a balled-up fist. It’s this refined delivery that, after only a few corners, means my confidence in the 675LT is already stoked, ditto the immediacy of the seven-speed automatic. We’ve had little criticism of McLaren’s SSG dual clutch system in the past, but even this has been optimised for more efficient and, most importantly, quicker shift times. It does not disappoint. 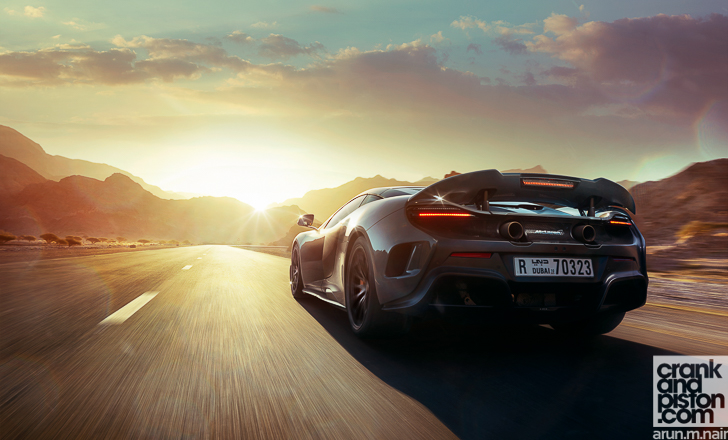 So yes, fast. Most definitely fast. But faster than the 650S? Quite honestly, no. The sensation of speed is just as innate in the 675 as its Super Series sibling and the sheer might of that gutsy twin-turbo V8 just as effective on the sprint. Hauling less weight probably makes a difference if you concentrate particularly hard, but right here and now, it’s difficult to judge. But then, as McLaren explained, with the 675LT, it’s not just about the top speed. It’s how the 675LT handles the corners of the mountain road that stretches before us that will be its true mettle.

It’s ironic that my first experience with the steering is not a particularly encouraging one: the guys have just spotted another potential ‘money shot’ location, and I’m asked to swing the car around before the light disappears completely. Pull off to the side of the road, select first gear, left hand down, full lock…

How to put this delicately: the turning circle in the 675LT is rotten, an offshoot of the new steering rack. The result is decidedly quicker steering rates but ultimately damaging the ability to turn the car on a die as you could with the 12C. A simple u-turn – in fact all of them – now becomes a quick-as-I-can three-point turn, making me very grateful that the visibility both front and rear is as good as it is.

With the shots in the bag after another 15 minutes waiting for the sun to rise, and with another fiddly three-point turn completed, I set off again towards the twisting mountain stretches, the poke from the V8 once again insistent rather than visceral. Truth be told, I feel a little put out by the turning circle debacle, concerned now that what I believed could be the 675LT’s banner feature – the handling – could in fact prove its biggest weakness. But then, lest we forget, form follows function, and I’m barely through the first couple of corners before I’m cursing my own scepticism. 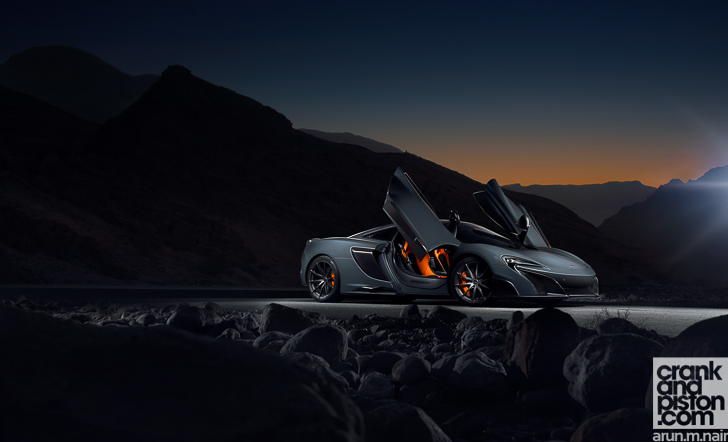 It’s perfect. There’s really no other word for it. Into the tighter corners, the steering is beautifully weighted, textured feedback and an abundance of grip from the front wheels pivoting the front end almost alarmingly quickly: it’s been rumoured the 675LT could even outmanoeuvre the P1, but we’ll wait for the twin test before confirming this.

To sharpen response at the helm paves the way for more electronic assistance and a slow decline in engagement as a result, but somehow Woking has got the balance spot on: far from being Ferrari-quick, the 675LT’s steering feels alert lock-to-lock, allowing me to fully exploit the levels of grip those Trofeo R tyres have to offer. Beneath the bodywork, revised suspension geometry and the stiffer springs allow me to keep the McLaren on a knife edge through some of the faster turns, the speeds we reach much higher than even I imagined possible (a comment on my own limits rather than the car’s, I can assure you). Throwing out the anchors sees that massive Longtail Airbrake rise up and blot out the rear windscreen, the stopping power barely credible. It’s far from ‘off and on’ though, the travel in the pedal and the feel for the discs more than enough to find the sweet spot.

“I won’t bore you with pros and cons, since quite frankly, one far outweighs the other”

From a purely visual perspective, there’s little to choose between them, ditto when the loud pedal is given a kick. It’s through the corners though that the 675LT truly comes alive and shows itself to be a much greater animal. Somehow the already stellar handling and balance of the 650S is improved upon in the 675LT, eliciting more grip, more confidence, more enthusiasm to lean on the front end and exploit the formidable talent lingering beneath. And I’m staggered. I have considerable respect for the 650S: that McLaren can produce a ‘track-focused’ model without tearing the essential character out of its Sport Series contender is a testament to Woking’s attention to detail.

I won’t bore you with summing up the pros and cons of the 675LT for quite frankly, as you’ve probably guessed, one far outweighs the others, while the 650S offers a slightly more civilised day-to-day package, the 675 is certainly no stripped out track weapon either: look past the turning circle, and there’s little you couldn’t use quite comfortably on the commute. Factor in the driving dynamics – namely gutsy acceleration, superb handling, perfect balance and enviable engagement – and it’s a crying shame that only 500 examples of this bon a fide ‘everyday P1’ will hit the streets. What better way for the Longtail to return from retirement after nearly two decades on the shelf?