Mazda’s third MX-5 didn’t quite hit the mark when new, but is now an affordable way into a fun rear-wheel-drive platform 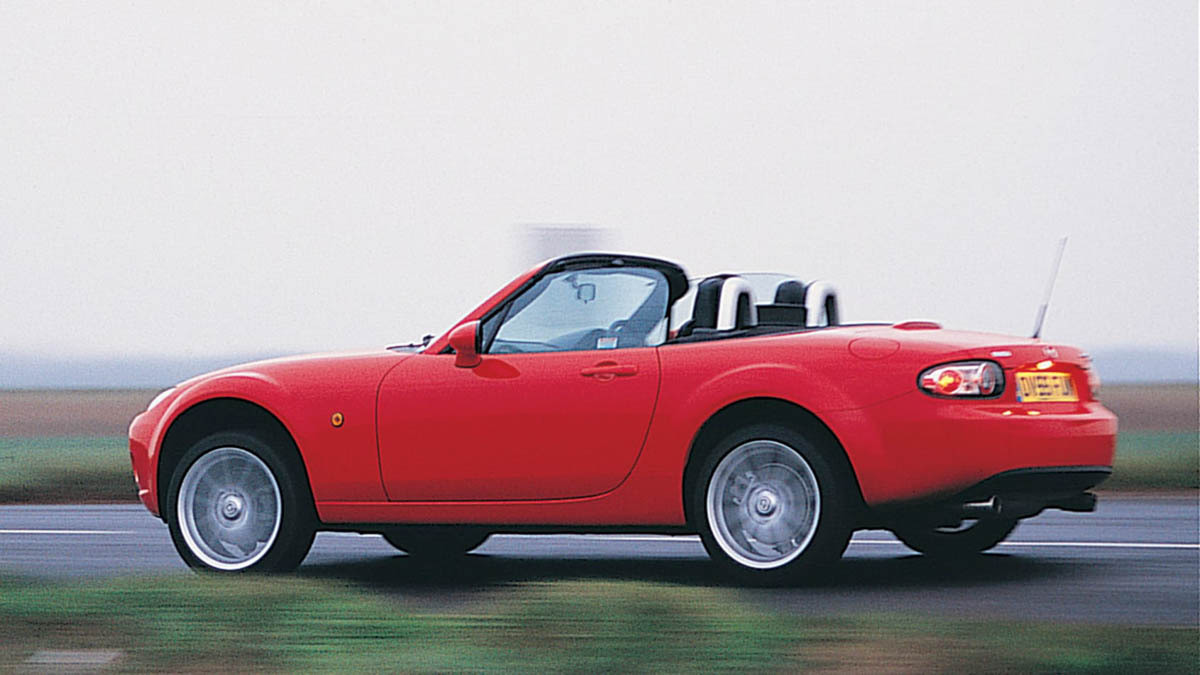 How will history view the third-generation Mazda MX-5? Possibly as something of an odd one out, we reckon. Assuming Mazda sticks to its compact and lightweight guns whenever the fifth-generation MX-5 comes around (presuming the market demands such things by then), the third-gen car will be unique among MX-5s in being a little larger and a little heavier.

It also arrived on the market with a bit of a stumble, losing some of the communication and delicacy to its handling that the first couple of MX-5s had offered – something you can read about later on. Mazda fixed the problem, and the third-gen car certainly made strides in other areas, but it’s perhaps not viewed quite as fondly as a result.

Still, there’s plenty to recommend a third-generation MX-5 today, from temptingly low prices, excellent reliability, and for car enthusiasts, a vast aftermarket only too happy to massage away the car’s deficiencies…

Mazda’s first and second-generation MX-5s had been a roaring success, but the automotive market of the 2000s was already a very different place to that of the 1990s. Many of the MX-5’s chief rivals had already come and gone, while customers now expected more quality, space and technology than the ageing Mk2 could offer.

The first signs of Mazda’s new direction came in 2003, with the reveal of the Ibuki concept at the Tokyo motor show. With clean, geometric lines and ultra-compact proportions it was very different from the Mk2 MX-5, actually closer to the Mk1, its oval ringed headlights hinting at the sidelights of the original car. Other details, such as the blistered wheelarches and simple, industrial interior indicated greater solidity and fewer concessions to the classic models that had inspired the first car.

When the production ‘NC’-generation MX-5 arrived in 2005, it was clear some Ibuki inspiration had crept in. Like many cars of the era it kept ornamentation to a minimum, relying instead on good proportions and strong forms – and the Ibuki’s wheelarches made the cut.

It was also a larger car though, not just compared to the concept but also previous MX-5s. It gained 65mm in length (and in wheelbase), 20mm in height and 40mm in width, with corresponding increases in track and in interior volume. If you were a taller individual, the NC was the first MX-5 that had a chance of accommodating you with minimal discomfort – and a fresh interior and a new, simpler hood design (its centre section now acting as a tonneau) were further improvements.

In 2006 the MX-5 also gained a significant new variant with the Roadster Coupe, which used a retractable, powered hard-top not unlike that pioneered by Mercedes-Benz with 1996’s SLK.

As the MX-5 had grown, so too had its engines. The base unit was now 1.8 litres in capacity, matching the larger option of the previous car, while a new 2-litre joined the range. Both were Mazda’s ‘MZR’ unit, more sophisticated than the old B-series engines and shared with Ford as the brand’s ‘Duratec’ 2-litre.

The underpinnings had changed too, not just thanks to the new platform but also sharing componentry with the rotary-powered RX-8. Front suspension was by double wishbones, while the rear was now a five-link axle. New too was electric assistance for the steering, while Mazda had worked hard to stiffen the structure too, reducing the old cars’ scuttle shake on poor roads. This made the NC a heavier car than the NB, but at 1122kg for the 2-litre, it wasn’t too great a penalty.

Unfortunately, along with snappy handling and a jittery ride, the new electric steering contributed to a car that we found hard to read and quite unpleasant to drive in certain conditions.

The third-generation MX-5 received a significant facelift in 2009, often dubbed the ‘Mk3.5’. Its new headlights and grille design gave the little roadster a wide-eyed grin that perhaps detracted from what turned out to be a much better car than early Mk3s. Handling tweaks finally improved the car’s balance, revisions to the electric steering delivered more feel, and the engines, while delivering the same outputs as before, both sounded a little better and offered improved economy.

In February 2011 one particular NC rolled out of the factory in Hiroshima as Mazda’s 900,000th MX-5 (the millionth would arrive with the fourth-generation MX-5 in April 2016). This reflected the slowdown in MX-5 sales over time – the half-millionth MX-5 had arrived in under ten years from the very first car, yet it took 12 years to only get four-fifths of the way there to the next half-million. Despite this, over its ten years in production Mazda would still build nearly 230,000 NC MX-5s, illustrating its popularity overall.

‘Half a mile outside our village, around a gentle left-hander, a squeeze of throttle in third gear and woooooah! From nowhere the back end slid round a good 30 degrees. The unintended excitement was over with a slight lift and an instinctive twist of lock (traction control and stability control are both omitted from the 1.8) but it was the way it had happened with no warning whatsoever that set alarms ringing.

‘This sort of tail-happiness can be a lot of fun of course, provided you can read when the car is approaching the limit of grip, but it’s not so good if you’re trying to second-guess what’s about to happen, and the 1.8’s steering was only slightly less inert than the 2.0’s. For drivers unused to oversteer, we’d say the stability and traction control systems of the 2.0 versions are a must.’

‘The newer car has the more instant reactions, allowing you to dart one way then the other through a sequence of turns. Keep the engine buzzing (which unfortunately is still about as appealing a sound as it makes) and you can feel the rear end almost gliding along behind you, swishing left then right as it follows the grippy front.

‘It probably wouldn’t be an exaggeration to say that we didn’t top 80kph all day in the MX-5s – the road simply wouldn’t allow it. And that may sound boring. But it wasn’t, and that’s the magic of the little Mazda. Speed is not the answer. We all get seduced by impressive numbers, but the most gobsmacking bhps and 0-100s would have been useless and frustrating on this fantastic piece of road. What was required was poise, a small footprint and not a lot else.’ 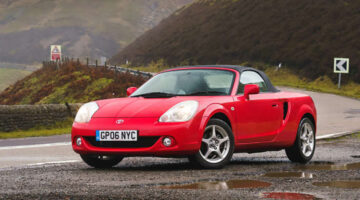 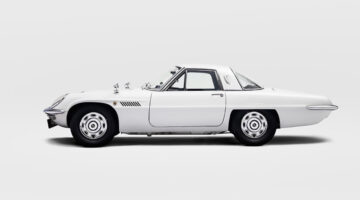 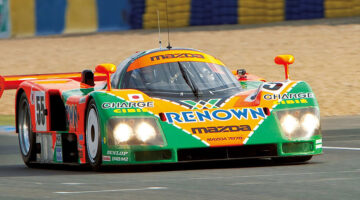