Unsurprisingly, handling is absolute Porsche territory. While to many the re-introduction of Porsche’s ‘GTS’ moniker – a throwback to the 904 original of 1963 – was a strange one when it appeared on the Cayenne in 2007, its nevertheless well deserved. The upgraded chassis of the Cayenne will re-arrange your pre-conceptions of physics, the 20mm reduced ride height impressively controlling its bulk through even the tightest corners: sorry to roll out the cliché, but here is an SUV that considers itself a sports car, and may well have a point. Hot hatch-like agility is measured by steering that, admittedly is a little low of feel and perhaps a tad over-damped by Porsche standards, but is nevertheless direct and sharp, proving well-matched to the speed of directional changes the twin-turbocharged V6 encourages. But more on that in a second…

The BMW by comparison could use a little more weight and feel to the steering, though to overly criticise would be unjust. The steering for instance is still very responsive if not exactly dripping with textured feedback, and while it may outweigh the 2110kg Cayenne GTS by 135kg, the X6 still manages to weave its way through the flick-flacks with massive amounts of grip and traction, and a not unreasonable amount of body roll. It can’t quite measure up to the GTS’ formidable benchmark, and granted the high seating position does emphasise that higher centre of gravity, but there is some genuine agility and stability Whether this is agility I’d be happy to lean on every day is another matter: understeer is teased if not outwardly demonstrated when you’re really on it, and while the updated suspension allows for impressive road holding, this does tangibly affect the ride quality should you opt for Sport or Sport+.

And then there’s the Maserati. Spoiler alert, the Levante S also cannot match the Porsche for sheer stability, but you wouldn’t call it disappointing either. Turn-in for instance is crisp, and there’s a re-assuring, meaty heft to the hydraulically power-assisted steering: smooth and well-judged, it feels more quick-witted than the BMW’s. Part of this is down to the all-wheel drive setup, with 50 per cent of the torque and power being sent to the rear axle. The resultant traction and well-weighted poise means throwing this 2205kg lump around is surprisingly easy, that weight being hidden well by ungodly amounts of grip and little in the way of body roll. Again, it’s not quite up there in Cayenne GTS territory, but there’s a natural athleticism that outmanoeuvres the BMW, nonetheless. 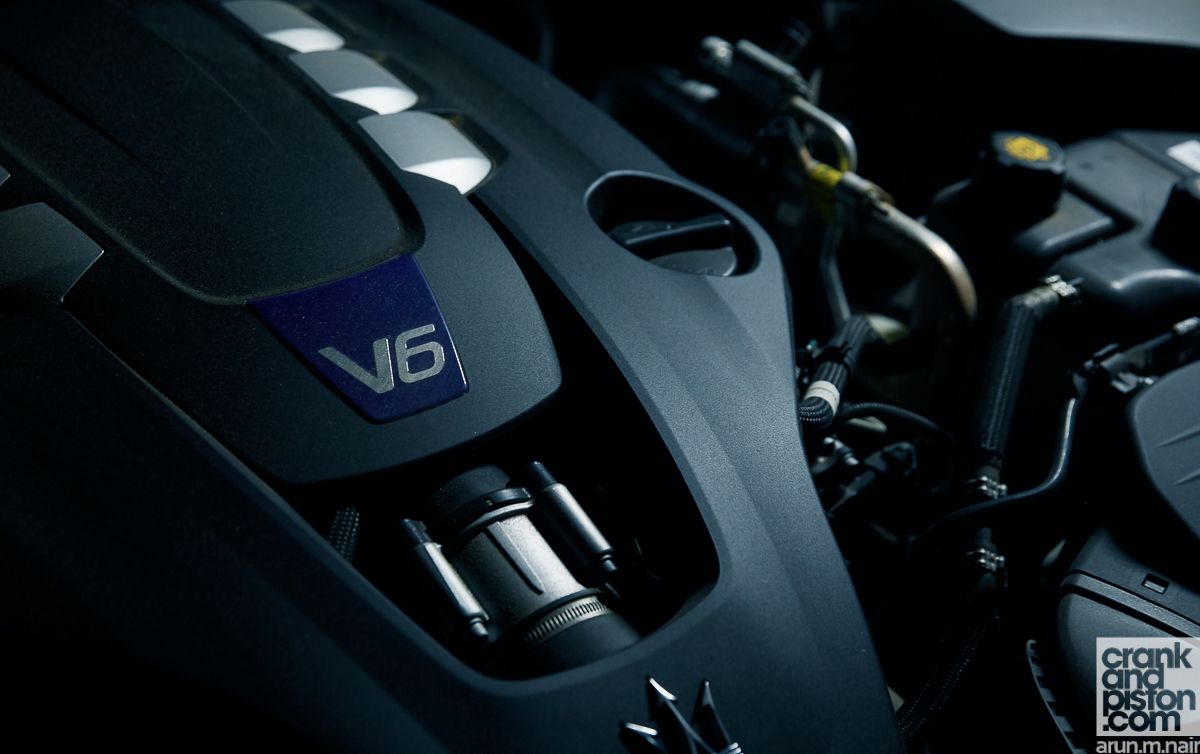 What does surprise though, and not necessarily in a good way, is the Maserati’s drivetrain. Yes, initial grunt is impressive, never petering on its way to the redline nor offering any signs of noticeable turbo lag across the rev range. But while the handling hides the sheer girth of the Levante impressively, it’s difficult to say the same of the V6. The soundtrack for instance is not pure, 100 per cent Maserati, the drone simply too mechanical and lacking any real emotional punch to really set the hairs on the back of the neck asunder. The Ferrari-engineered V6 is quick, don’t get me wrong, but smooth rather than ratchet-like shifts through the eight-speed automatic gearbox means the Levante doesn’t feel overly rapid.

Bizarrely, it’s a similar situation we find with the Cayenne GTS. The Tiptronic S gearbox may be impressively swift with its gearshifts, but doesn’t offer the same intuitive response as the PDK, a shame given the enthusiasm with which the V6 is keen to canter and stretch its legs. Deep, gutsy pick-up is then followed by progressive acceleration that, come the 3500rpm mark, conveys a whole new surge of adrenaline as the turbos spool up. It’s not a decisive thwomp of forward momentum and can’t quite match the Turbo for serious bursts of speed, but it’s enough to emphasise that the GTS will not run out of steam anytime soon. Again though, the doleful timbre of the V6 just doesn’t fit the enthusiasm of the occasion, something its V8 predecessor  managed admirably.

Not an issue the X6 need concern itself with. For starters, the V8 under the bonnet goes about its business with a raw, textured, almost angry note, one that picks up in ferocity the further up the rev range both the 4.4-litre unit and the well-ratioed gearbox will allow. It’s the acceleration though that really impresses. Like both the Porsche and the Maserati, initial grunt is deep and menacing, but rather than cascading into linear pull from there, the BMW’s V8 continues to build, each few thousand revs bringing with it more decisive bouts of forward momentum. It feels more than quick. It feels exciting. 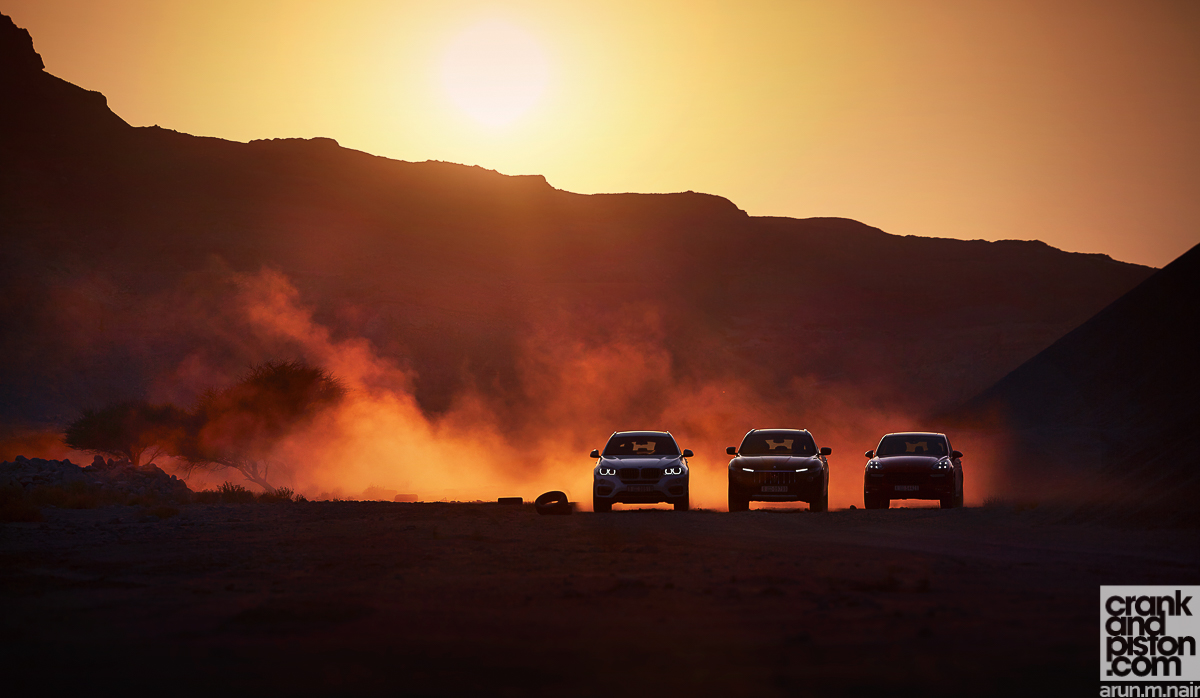 Ultimately though, the BMW is not the performance luxury SUV of choice for this particular writer. Yes, the ride comfort is easily the most forgiving of the three, though this has not dampened the composure the X6 enjoys through the corners, even if a slightly higher centre of gravity and more body roll means your confidence to push is not as high as it is in the Levante or Cayenne. Design-wise the X6 also comes up short, and while the V8 is the powertrain you’d want, the package that surrounds it does fall a bit behind compared with its rivals.

As for that matter does the Maserati. The design is sterling, the aptitude through the turns very impressive, and if there was any doubt that the Levante was a deserving new addition to the performance luxury SUV market they’re all but gone. What does let the newboy down though is a lack of any real sense of charisma, something we’d expected the Italian to cream its opponents with. It handles impressively and feels genuinely fast, if a little lethargic. And that’s it. Where is the Maserati character? Where is the panache and the style? Where is the wind of change? Impressive as the Levante S is, as an experience, it feels flat.

In terms of sheer agility then, the Cayenne GTS stands alone in this group test. It’s arguably the only one of the three you could genuinely hustle through the turns whilst simultaneously not eroding your spinal column to dust. The design remains divisive meanwhile, and it is a pity the twin-turbo V6, though not lacking in grunt, ultimately falls short of its V8 predecessor in terms of charisma.

But if Maserati was hoping to share the limelight with Porsche, it still has some work to do. If you’re looking for a performance luxury SUV, the Cayenne is still the one you’ll want. 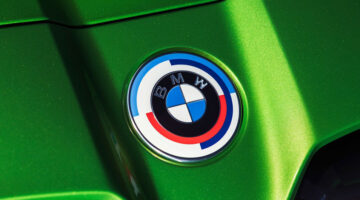