In one of the world’s wealthiest regions, gets its first taste of Maserati’s new, fire-breathing SUVs transformed by – at last – V8 engines. 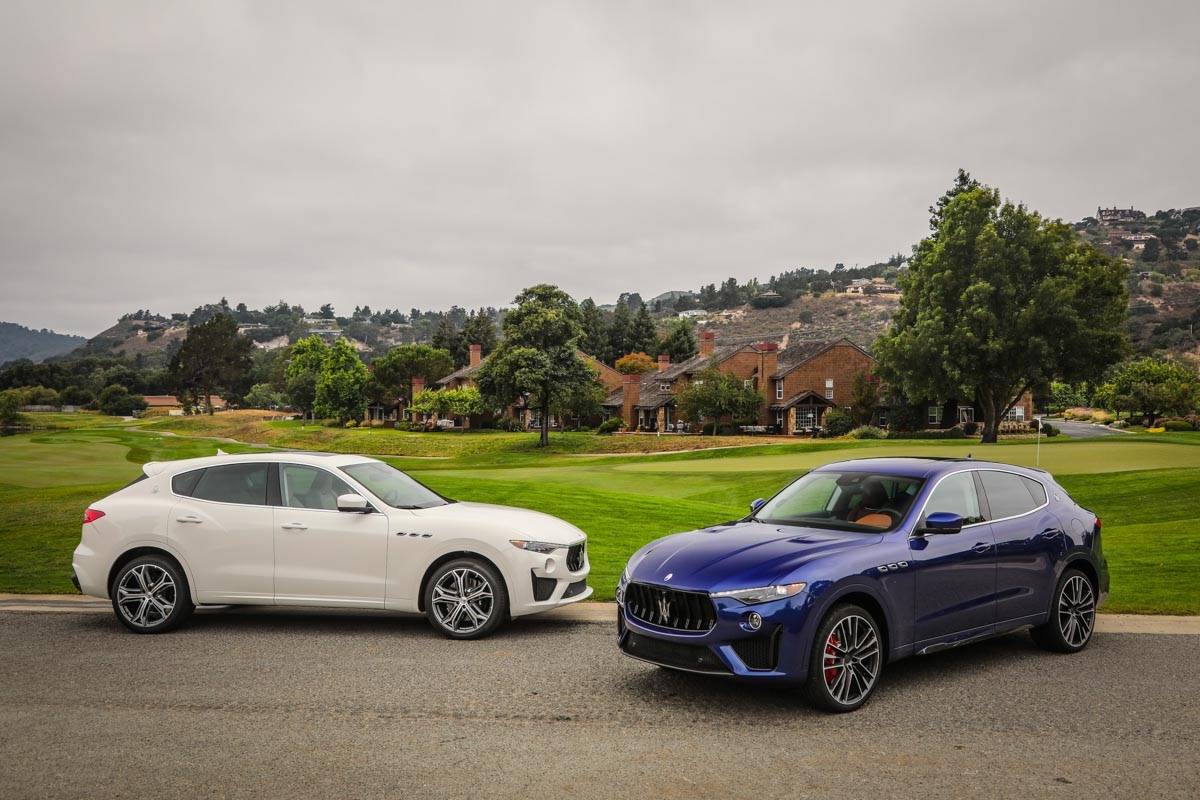 There is nowhere on this planet quite like the small stretch of California coast between Los Angeles and San Francisco known as Monterey. Nowhere.

Step outside, breathe in deep and the smell is unmistakably old-school wealth. It’s an area seemingly unsullied by the passing of time, where the pace is relaxed, art galleries occupy sleepy streets and money is mixed with good taste. There’s no chintz, no naffness, no vulgarity. This is a slice of America that Donald Trump just wouldn’t ‘get’, no matter how many well-heeled Republicans live here in absolute, low-key splendour.

Take a stroll around Carmel-by-the-Sea, the small, sleepy town in Monterey County where fewer than 4,000 people live and Clint Eastwood used to be mayor. The shops and restaurants have water bowls outside their entrances for your accessorized pets to drink from. The fairy tale architecture is picture perfect and, on any given side street, you might find a pristine early Lamborghini Countach, a beaten up Porsche 356 Carrera or a daily-driven Auburn Speedster. And when it’s Monterey Car Week, well, the entire county is teeming with priceless exotica wheeled around by some of the world’s wealthiest collectors.

And it’s following this most octane-rich festival of motoring goodness, crowned by the annual Pebble Beach Concours d’Elegance, that I find myself in an Italian crossover, ready to explore the majesty of this legendary region and the previously untapped potential of the ‘Maserati of SUVs’.

There’s a feeling among those of us familiar with Maserati that the Ghibli and Levante should have both been available with V8s all along; that the inferior cylinder count (and, indeed, lack of inherent Ferrari cache) might have dented sales of what are otherwise very good cars. With the Levante now able to challenge the likes of Porsche’s Cayenne Turbo, at least on paper, fortunes for the SUV may well improve. We’ll have to wait and see if the Ghibli becomes the V8’s next recipient but we live in hope.

Here in California, however, we have both the GTS and Trofeo versions of the Levante to experience, with the former putting down 542bhp to all four corners and the latter a rather rude 582. These are serious numbers in anyone’s book – could the increased cylinder count transform the Levante into a performance leviathan? I can think of nowhere else I’d rather be when finding out.

Not that anything with a fossil fuel-burning engine is necessarily flavour of the month around these parts. For all the wondrous automobiles housed here in collections, shown in displays or used at the weekends for quick blasts down the Pacific Coast Highway, there is a definite aversion when it comes to new machines with internal combustion engines.

That Tesla has its factory not far from here is no coincidence – Silicon Valley is north, on the outskirts of San Fran, and has created much of the wealth spread across the county; wealth that only the Gold Rush days had previously seen. There has also been a huge push over the past three decades to clean up the air breathed by all Californians, which has paid off by doing away with the choking smog that used to engulf the coast. So it can’t be any surprise that the great and the good have embraced electric propulsion – this is the land of the Toyota Prius and the Tesla Models S and X. A thundering V8, then, might be immediately persona non grata.

Visually and mechanically there is little to distinguish these two new models from the V6 versions, apart from their engines. The GTS has a body coloured lower front splitter and rear bumper, while the Trofeo makes use of carbon fibre rather than paint. And there are two choices of alloy wheel designs on offer for V8s, with the Trofeo also getting its own unique bonnet vents.

Engine-wise, the V8s are similar to that fitted to the Quattroporte GTS – oversquare short-stroke, displacing 3.8-litres but featuring reworked heads, camshafts, pistons and rods. Both share the same twin-scroll turbos but the Trofeo’s management system has been programmed to produce more boost in the upper rev ranges, responsible for the higher power output. Torque for both is the same, at 538lb ft, peaking at 2,500rpm and, in normal conditions, it’s all sent to the rear wheels with 50 per cent available for redistribution up front if necessary.

Nobody actually needs a car like this. But when has that ever stopped manufacturers from developing and marketing them? Just consider the choices out there: Cayennes, X5s, Bentaygas, Range Rover SVRs, not to mention offerings from Lamborghini, Rolls-Royce and soon Aston Martin and Ferrari. The laws of physics, which would normally prevent machines this big and heavy from going around roundabouts at more than walking pace, have long since been overcome and it’s open season for insane power outputs from cars that seemingly offer all things to all comers.

The Levante does, however, do something the others cannot: it actually feels like a performance car rather than a big, hulking luxo-barge. And that’s partly down to the design of its interior, which deliberately shrinks around the driver, yet its front seats are even more accommodating than those in a Cayenne. So the visual appeal of it cosseting its occupants thankfully does not come at the expense of interior space, comfort or luxury, although there could be a little less, FCA-sourced switchgear in the cabin for it to be given full marks.

After exploring the delights of Monterey’s appealing landscape, with its entertaining and sunbathing seal population, its period wooden buildings, pier and screeching gulls, it’s the GTS’s nose I first point in the direction of Pacific Coast Highway One – undoubtedly the most famous stretch of road in the United States. It’s a jaw-dropping route that hugs, as the name suggests, the Pacific coastline, offering some of the most iconic sights available through the windscreen of a car, anywhere in the world.

The GTS makes a fine job of covering great distances in exceptional comfort and, radar traps and humourless cops notwithstanding, enormous speed. The road surfaces here are often far from perfect, the result of temperature extremes in winter and summer causing cracks and worse, but the GTS soldiers on like any good luxury SUV, without feeling overly soft, only getting slightly bouncy on the very worst sections with the car’s suspension in Normal mode. Maserati’s sports car heritage hasn’t gone to waste here – this is, in reality exactly that: a sports car, but not as we know it, and one that’s good for 290kph. That’s Porsche 911 territory.

The Trofeo, though, is even more of a performer, not bowing out until it’s barreling along at 305, which makes it one of the world’s fastest load luggers. And it sounds magnificent when the taps are opened too, the exhausts allowing for a symphony of high-pitched screams, pops and bangs. These engines, as you’d rightly expect, have real character and individuality, and Maserati has made sure their soundtracks are to be enjoyed by all, without the turbochargers dampening their ardour. It’s this character, this flair, most of all, that could tempt customers away from the more restrained Germans.

As impressive as the GTS is, I’m glad to be in the Trofeo as I know the highway is about to get a whole lot more dramatic. As PCH1 tightly hugs the rugged coast, it leads to the world famous Big Sur – a stretch of staggeringly beautiful scenery roughly 30km south of Monterey, that had been mostly unseen until the road was opened in 1930, after which it became an inspiration to untold numbers of writers, poets, singers, artists, photographers and filmmakers, including Jack Kerouac, Ansel Adams and Henry Miller. It’s easy to see why, and the Levante Trofeo is a fine way to travel this unmistakable route.

Externally there are some signs that this is the mad man, the bullying big brother of the more reserved GTS. Certain enthusiasts will welcome the carbon fibre addenda while others will dismiss it as boy racer nonsense, but none of that matters from behind the wheel. This car is perfectly at home on this magnificent road and has a trick up its sleeve that’s missing from the GTS: Corsa mode.

Activating this really does sharpen things up. The suspension stiffens and lowers by 35mm, and the torque balance becomes even more biased to the rear axle. The traction control takes more of a back seat, too, and gearshifts are even faster. Oh, and in Corsa you can activate the launch control function, and the pulse-quickening sound from the exhaust is turned up to 11. It isn’t subtle but it’s definitely a shot in the arm for its maker and liberates previously unseen talents from the Levante’s chassis and drivetrain.

The Trofeo is supercar quick, yet never feels uncontrollable or wayward. It inspires confidence the harder it’s pushed, especially into the fast sweepers of PCH1. Acceleration is breathtaking, the noise intoxicating and its handling assured. It feels every bit as rapid and capable as a Cayenne Turbo but it sounds so much better.

As I thunder down and across the beautiful coastline, I ponder on the differences between the GTS and Trofeo, the biggest one being their price. At $120,000, the GTS is far from cheap but for the Trofeo you’ll need to stump up another 50 grand. The performance gains probably aren’t worth the extra

outlay but, if you’re only interested in having the best there is, it’s an irrelevance.

Either is a fine way to travel, make no mistake. They’re stylish, luxurious, characterful and hugely fast. They’re what the Levante should have been in the first place and, in a market saturated with brutally powerful luxury SUVs, there’s still an undeniable glamour intrinsically attached to the Maserati name. With eight cylinders up front the Levante can now finally live up to being the Maserati of SUV’s. 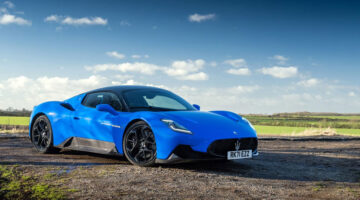