Since its 2011 launch, the Range Rover Evoque has gone on to become Land Rover’s most successful model. Seem promising for a long term review…

If you’d casually mentioned to a Land Rover senior executive back in 2011 that the Evoque would be the company’s best-selling model just five years later – ahead of the Discovery and even the sainted Defender – chances are they’d politely have asked you if the substance you were smoking was medicinal. Yet since its 2011 launch, close to half a million Evoques have rolled off the showroom floor, meaning one in every three Land Rovers sold in the last five years has been an Evoque.

Granted at the time it made less sense: a ‘compact’ SUV melding the rich off-road history of possibly the most rugged manufacturer in the business with elements of high fashion. Preposterous, the forerunning LXR Concept – then badged as a Land Rover, to make matters worse – receiving the kind of nuclear heat only the early Porsche Cayenne and Bentley pre-Bentayga EXP 9 F could understand. And yet looking back, a 4×4 offering the desirability and capabilities, both on-road and off, of a Range Rover with exterior and interior styling turned up to 11 and the cache of a premium badge on the bonnet? It seems so obvious now. 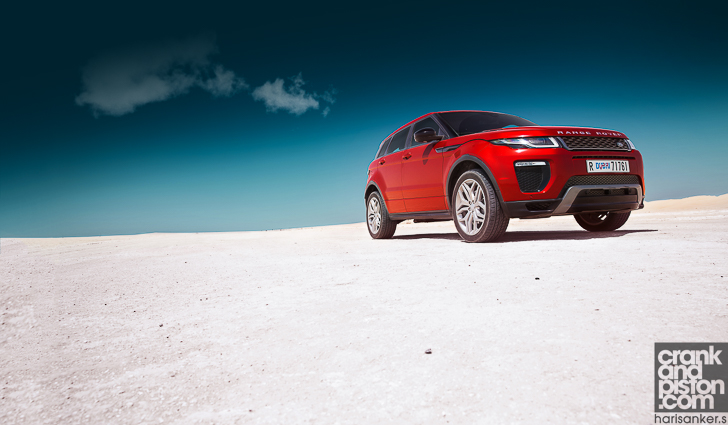 Indeed, Jaguar Land Rover will freely admit that the success of the Evoque has hinged on its striking design. Hardly surprisingly thoughts quickly turn as such on our new 2016 HSE Dynamic long termer. Granted, save some new LED headlights and the addition of a nine-speed automatic gearbox for the hyper-milers out there, there’s been little in the way of radical changes in the design since 2011. Not that we’re complaining of course. Those concept-like looks, complete with slender hexagonal grille, black window pillars, small windows and rather cheeky dual-tone paintwork, mean the styling is sportier than those found on the Audi Q5 or BMW X4. Throw in 20in split spoke alloys to complete the look.

Beneath the bonnet lies a 2-litre turbocharged four-cylinder, pushing a reasonable 237bhp, 251lb ft of torque, and a solid 143bhp/ton power-to-weight ratio: clout the right pedal and the five-door Evoque will hit the ton in a not-unreasonable 7.6 seconds. Naturally we’re concerned that the extra 1kg for the five-door option on our 1658kg Evoque might hinder the handling, but we’re confident the lightweight aluminium space frame will counter that.

Having said that, we’re no strangers to the Evoque’s handling capabilities, having set the Range Rover against both a modified BMW 118i and a Volkswagen Scirocco R back in 2012 and against the terrain Jaguar Land Rover habitually uses in the Middle East for its extreme weather testing later that same year. Let’s just say we’re feeling pretty confident for the next three months.

You can check out more of Management Fleet updates HERE, and more Range Rover stories HERE