This 700bhp Liberty Walk R35 Nissan GT-R is not only badass, it also represents Driven to Cure, a charitable organisation that raises awareness of kidney cancer. Prepare to feel inspired…

We’ll warn you, this particular video is kind of brutal, and will repeatedly hit you in the feels with almost laser-guided precision.

Meet Andrew H. Lee. He’s 20 years old, already a company CEO, and just over a year ago, he was diagnosed with HLRCC, a rare-form of kidney cancer. If that wasn’t devastating enough, the recommended cure would only be affective for, at maximum, three years.

See? Feels. And it doesn’t end there.

After the enormity of this bombshell had sunk in, Andrew and his father began discussing his life goals. Being a car guy, Andrew had always wanted an R35 Nissan GT-R, but couldn’t quite cover the cost of one with the savings he’d amassed. The next day, Andrew’s dad said simply, “let’s go get you your car.” 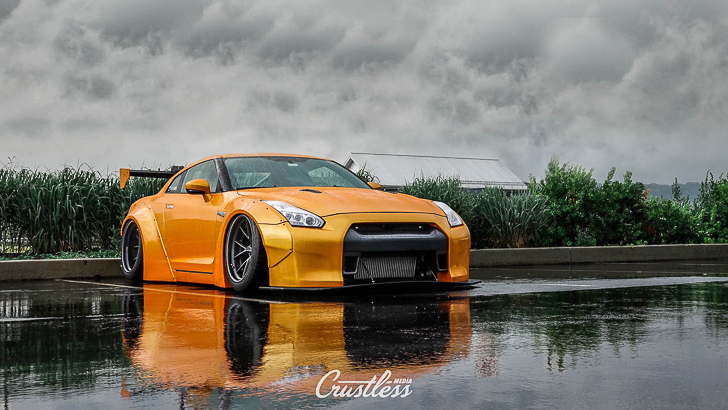 Three weeks later, new GT-R owner Andrew was making new friends and spreading his story across local car shows and meets, his R35 eventually doing likewise. So quickly did his story spread in fact, that the GT-R soon became more than ‘just’ the car of his dreams: if I may borrow his own tagline, it became “the vehicle which gave [Andrew] the opportunity to make a difference.”

Driven to Cure was setup shortly after as a charitable organization designed to help promote awareness of kidney cancer – and HLRCC in particular – and the 31,000 Americans affected annually by the disease. The figurehead, alongside Andrew? The R35 itself, newly Liberty Walk-ed and featuring new wheels and suspension, Michelin performance rubber, Bride racing seats, and a 700bhp 3.8-litre twin-turbo V6. The finishing touch for the “beautiful orange creature” – aside from an ‘F Cancr’ number plate – was a unique paint finish, the gold layers therein changing the shade of orange depending on the light available. Once again, word spread fast. And for Andrew, helping to garner additional research funding “ to fight this horrible disease’ is the realization of another life goal.

Watch the video. It’s truly lovely. And remember, manly tears are nothing to be ashamed of…

* If Andrew H Lee’s story has plucked at your heartstrings, you can learn more about Driven to Cure HERE, can donate to the cause HERE, and keep up to date with the team on the official facebook page HERE

Kudos to Crustless Media for their sterling work.

Previous ArticleOPINION. Porsche and the return of the manual gearbox
Next Article NEW Vision Mercedes-Maybach 6 revealed

[VIDEO] Fastest drift car in the world meets James ‘The Machine’ Deane, at the Dubai Autodrome.