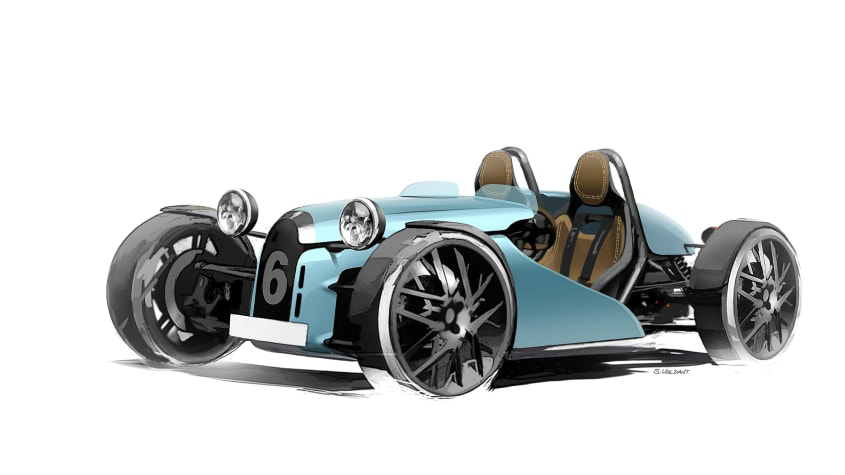 Thankfully, there are still people around wishing to create such cars, and that’s where French company Lesage comes in. Headed by Bertrand Lesage, whose background is in race car design, the company aims to produce small-volume, hand-built and lightweight sports cars with both small-capacity petrol and simple electric powertrains.

The first Lesage proposals are the 01T and 01E, minimalist retro-styled sports cars powered by, respectively, a 1.2-litre Peugeot three-cylinder turbocharged engine, and a Peugeot-sourced electric powertrain. Each drivetrain is mid-mounted and drives the rear wheels, and while each promises modest power, each is also light, ensuring lively on-paper performance figures.

That large battery does promise useful range though, Lesage claiming 338 kilometres. The petrol model meanwhile is the less expensive, at €54,000 ($61,000) to the 01E’s €62,500 ($70,600), with pre-orders opening in September and production scheduled for 2021. While the prices sound expensive, the company promises high-quality materials, and has several key suppliers already lined up for the car’s various components.

Bertrand Lesage tells us the project came about because as a race car designer (he’s worked on the Lamera Cup, a single-make series in mainland Europe using mid-mounted 2.5-litre five-cylinder Ford engines in a spaceframe chassis, and was also involved in the Exagon Furtive e-GT) he was frustrated at never getting to drive and enjoy his creations.

At the same time, he saw a simple design like the Lesage Roadster as an ideal entry point into manufacturing his own cars. ‘The brand has no history,’ he says, ‘so you have to first build a reputation.’

Perhaps the most interesting aspect is how Lesage is aiming for something approaching carbon neutrality with his cars. He lives on a farm, keeps bees, and his wife is an organic farmer, so he’s very aware of environmental imperatives. That makes a small, lightweight electric car a no-brainer, but with the petrol model Lesage has committed to planting hedgerows to offset production of the car – he calculates around 200 metres of hedgerow per vehicle would cover the carbon demands of both production and around 4800 kilometres of use per year.

Building a sports car company from scratch is no easy task, but it’s refreshing to see another pared-back model join the fray – and it’s hopefully a brand we’ll be hearing more from over the next year or so.