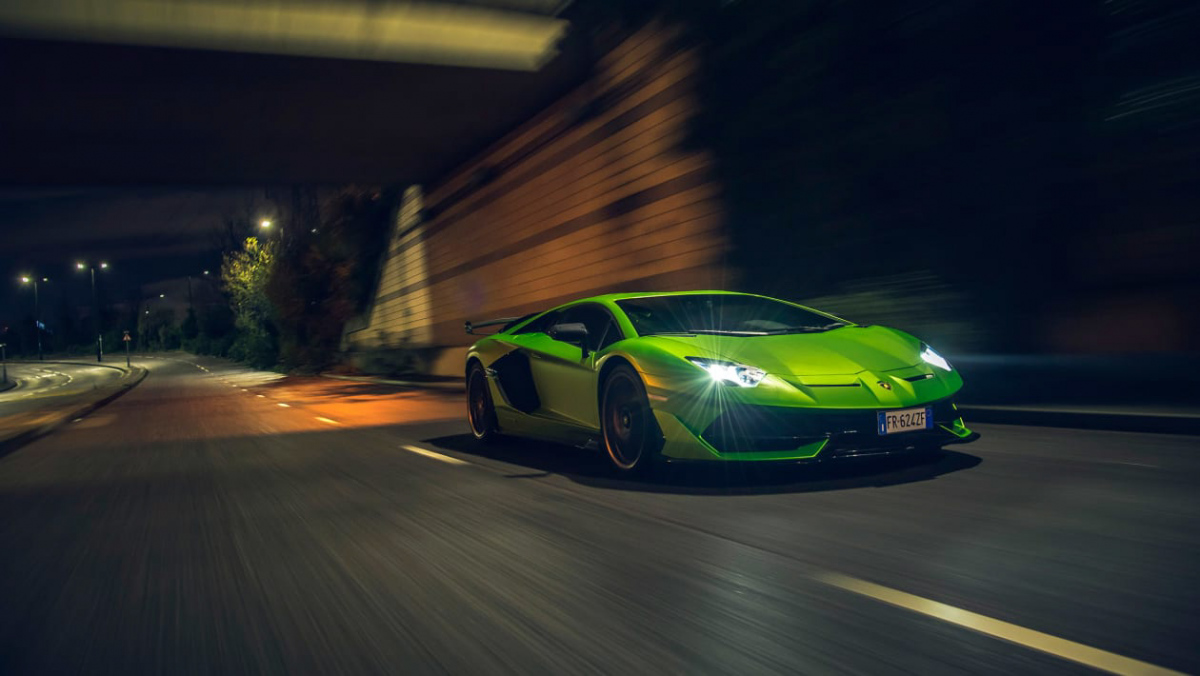 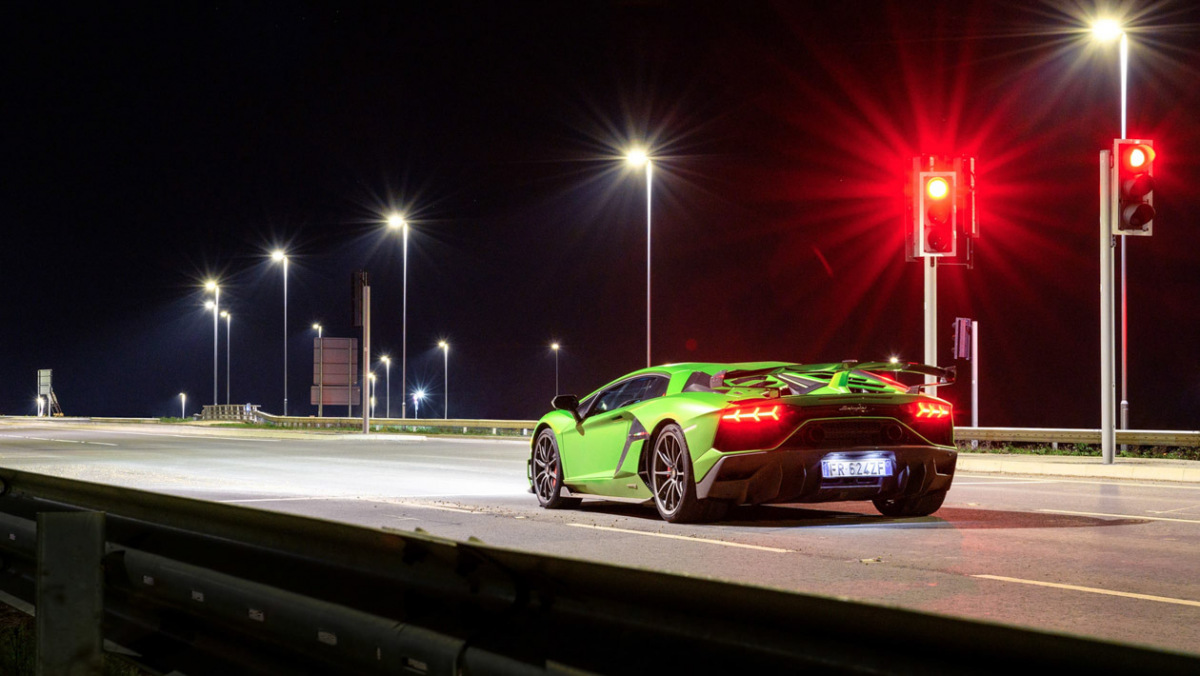 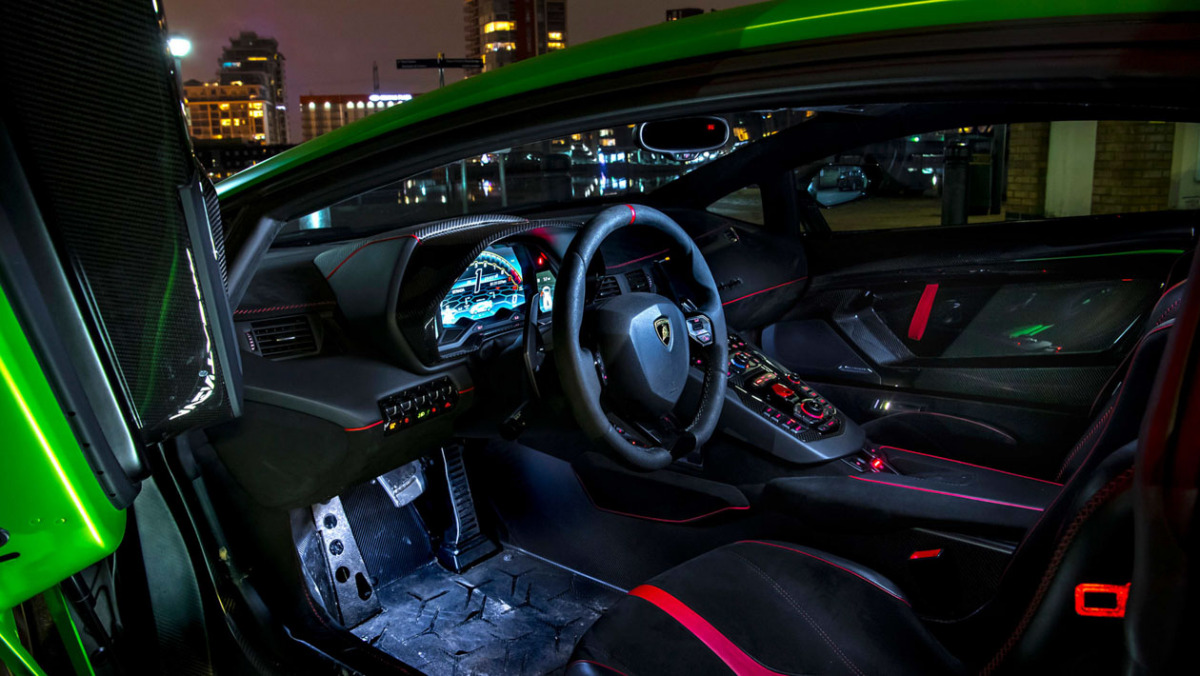 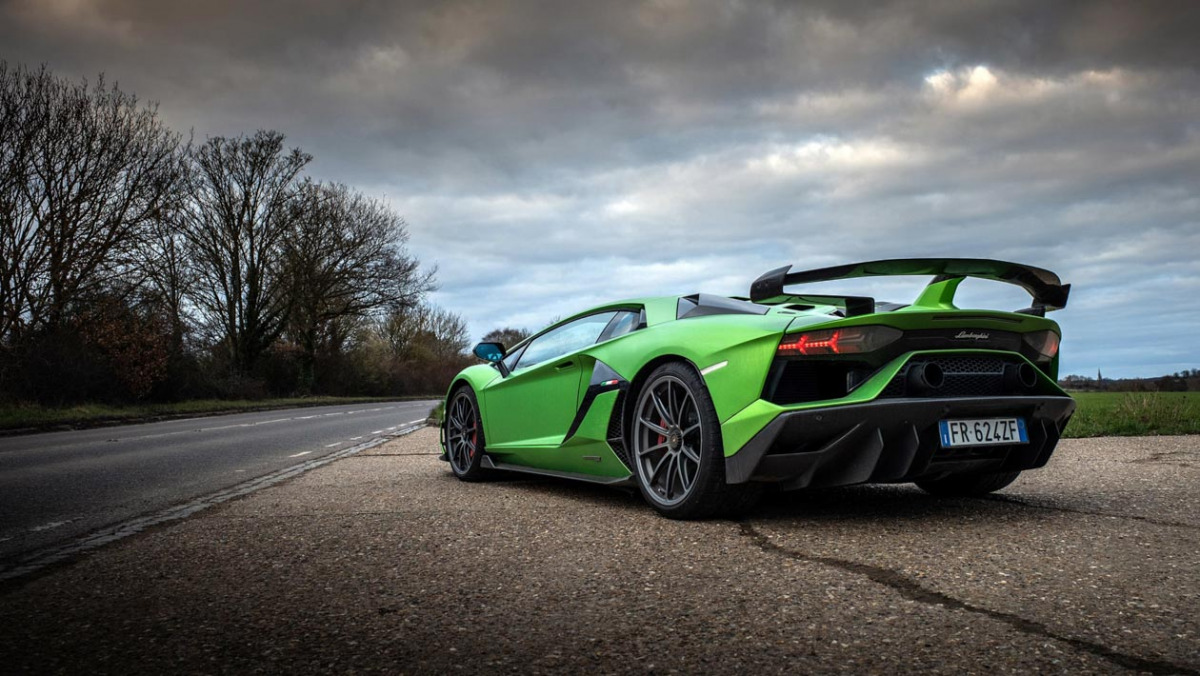 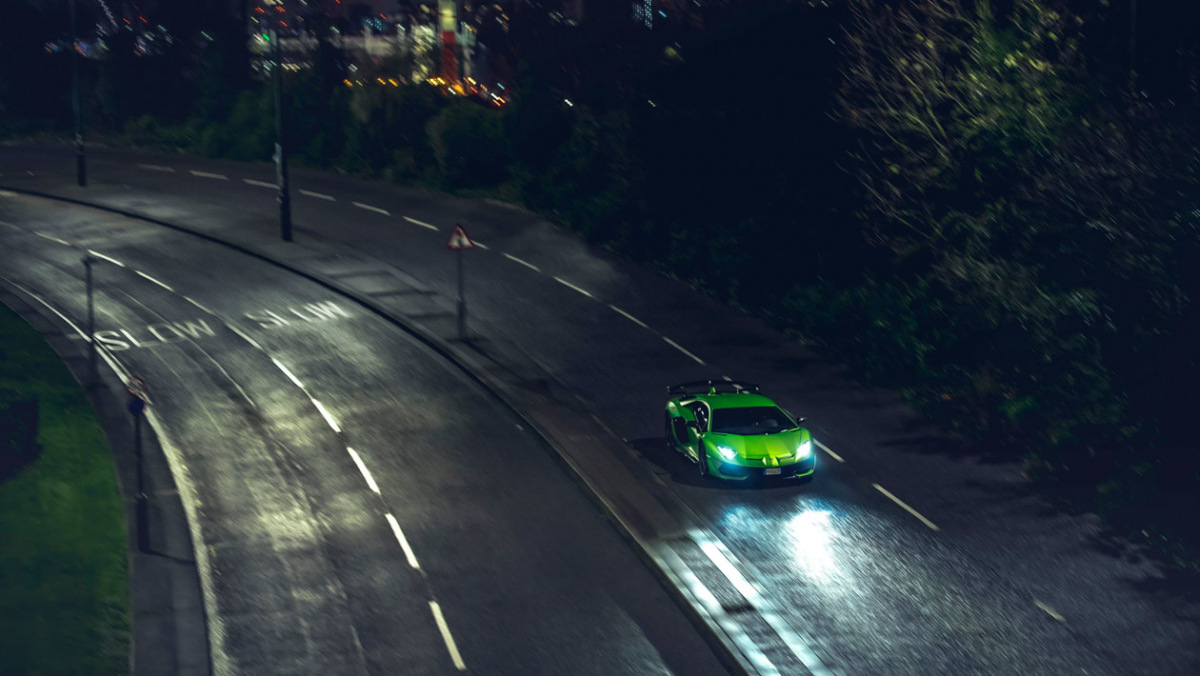 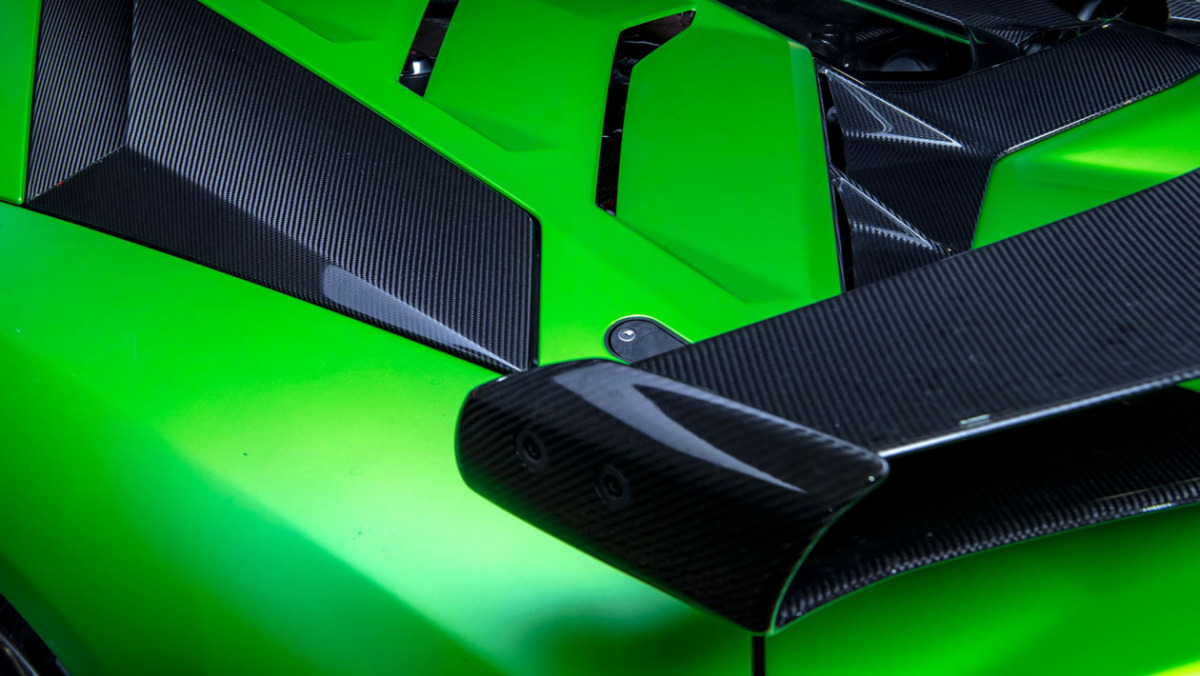 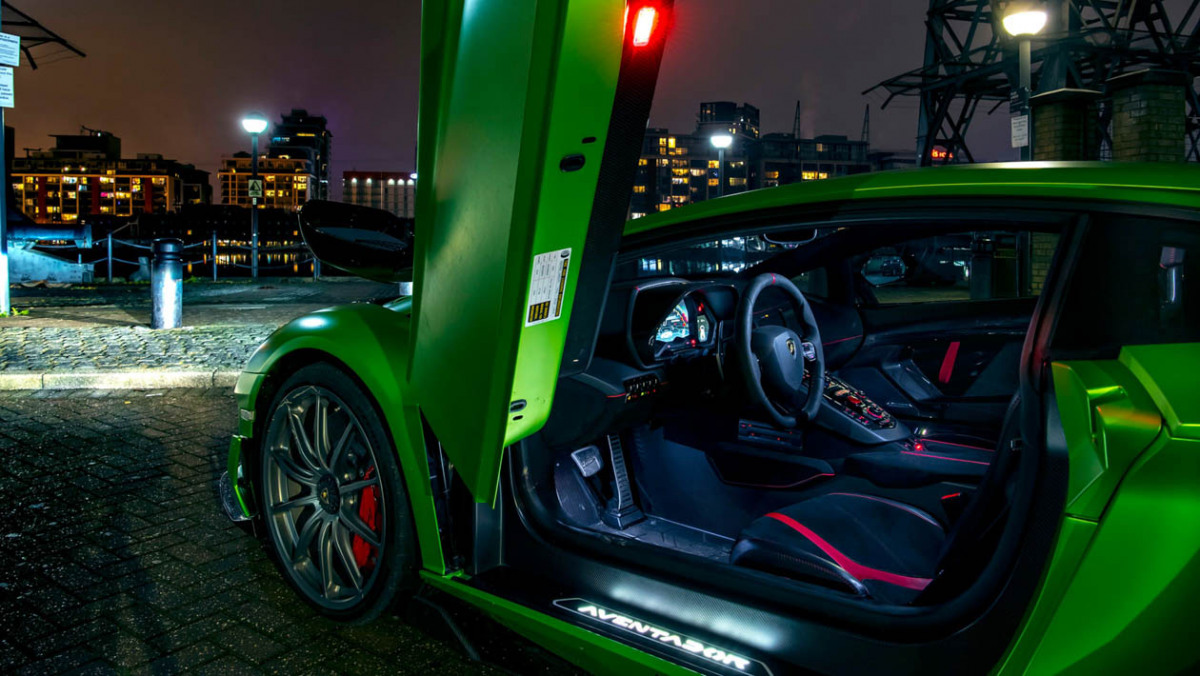 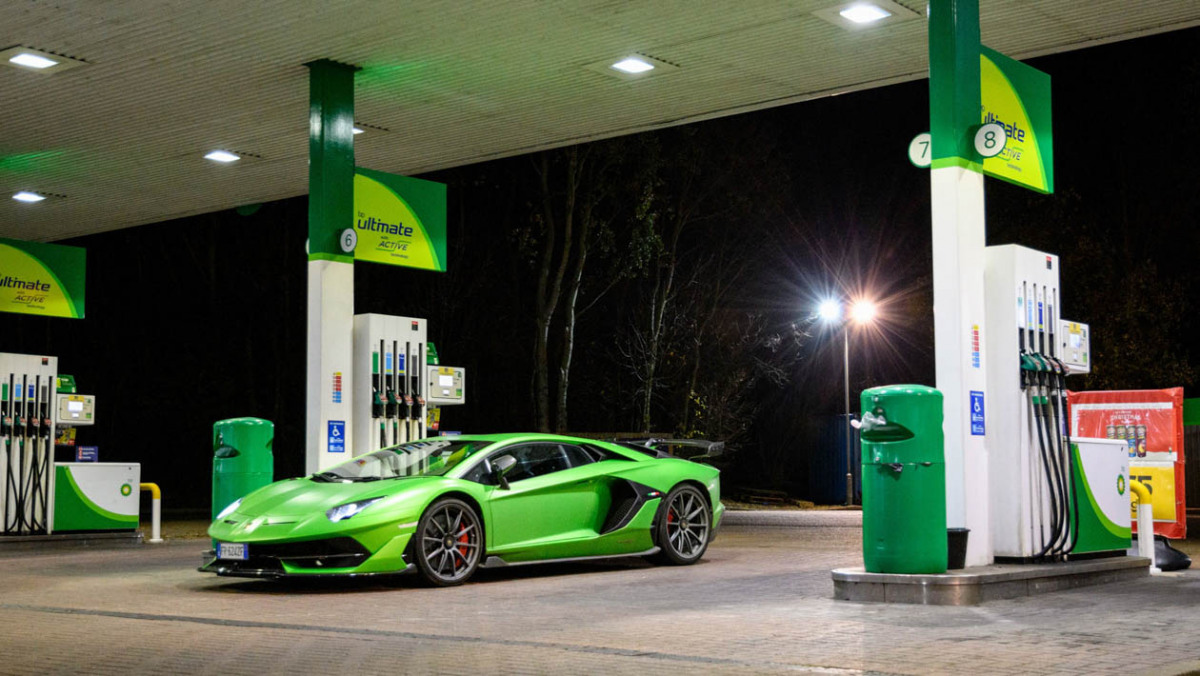 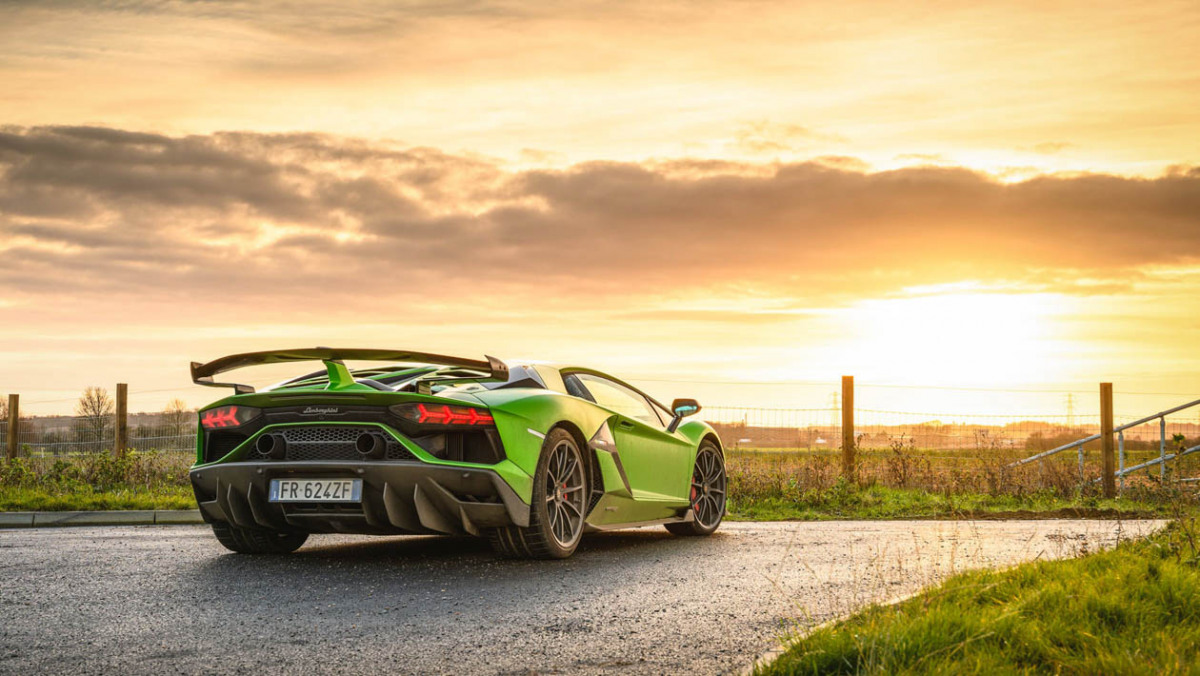 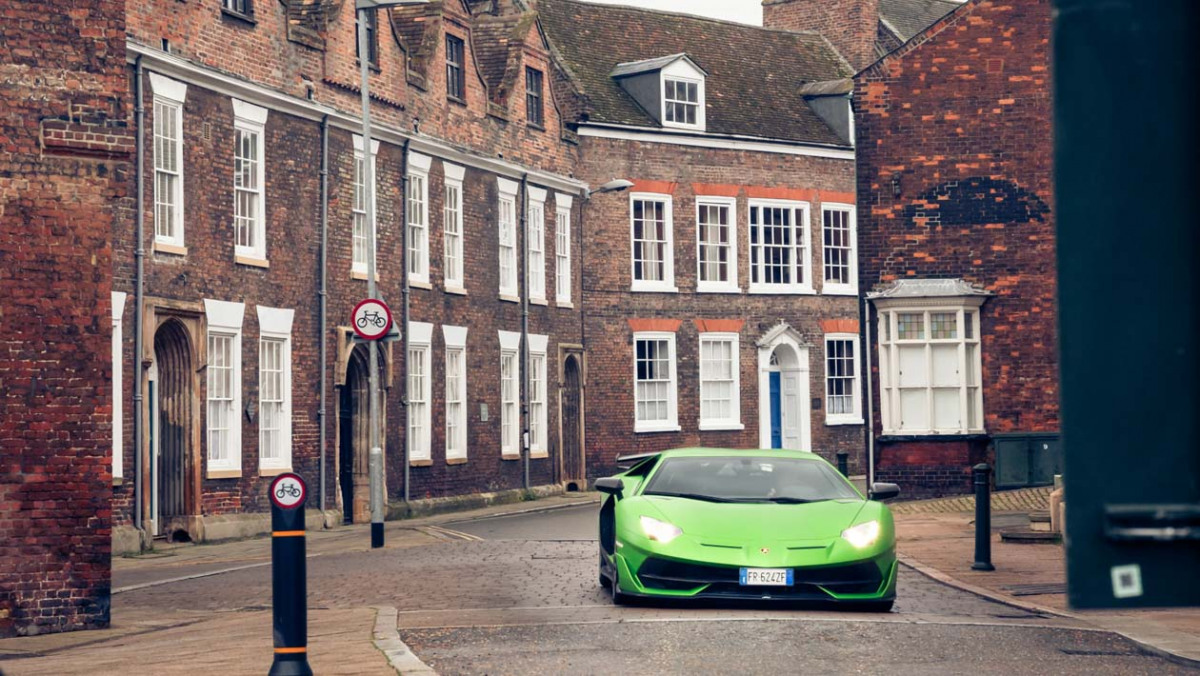 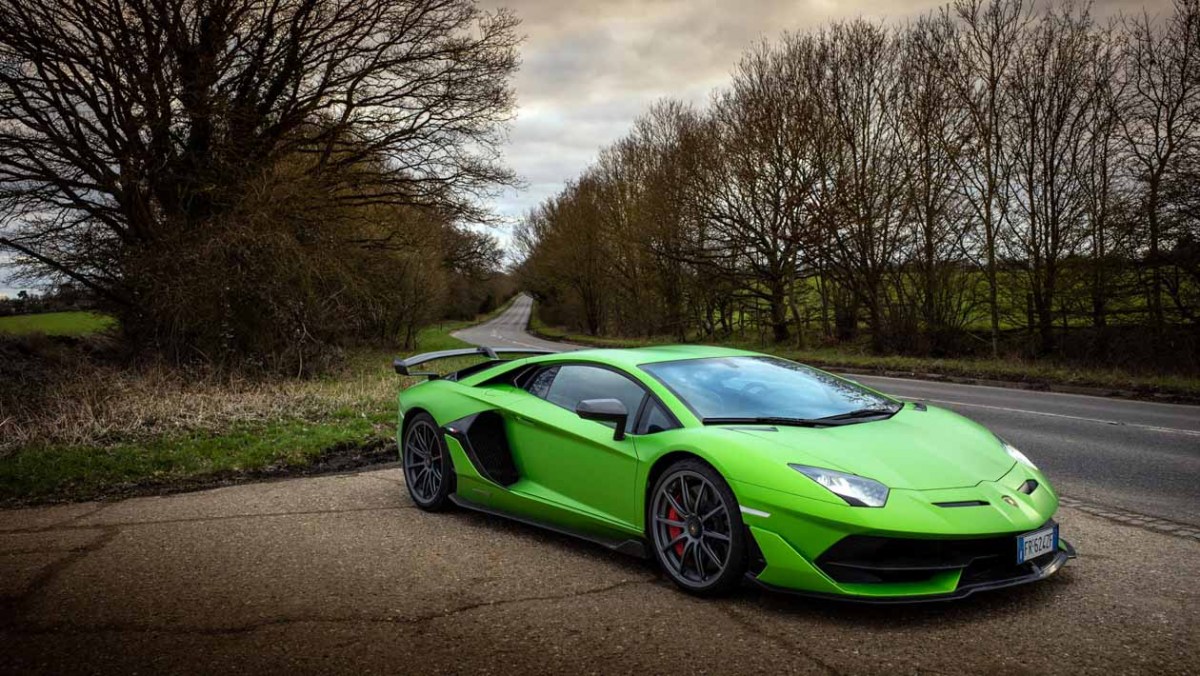 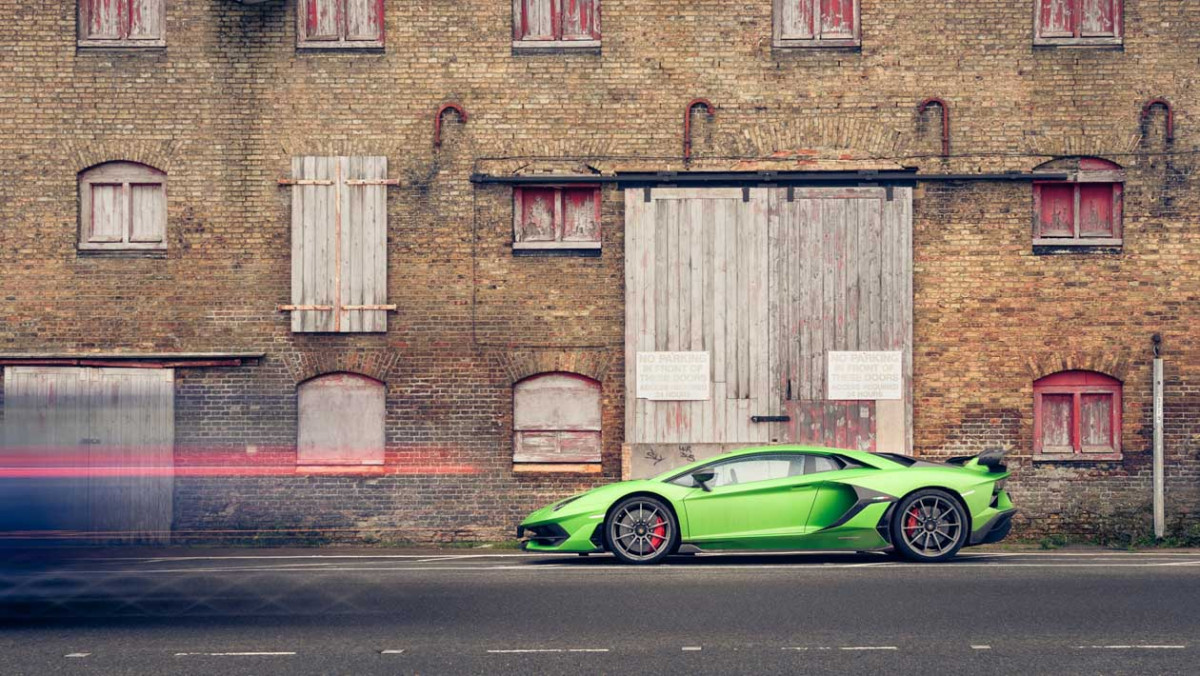 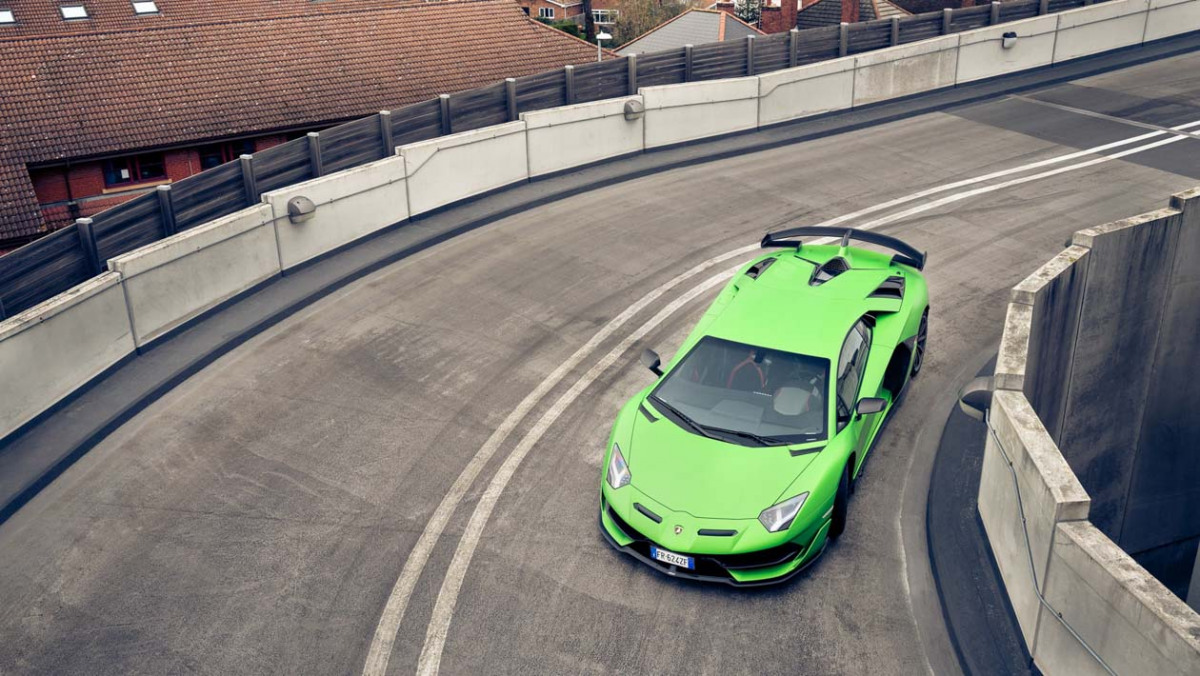 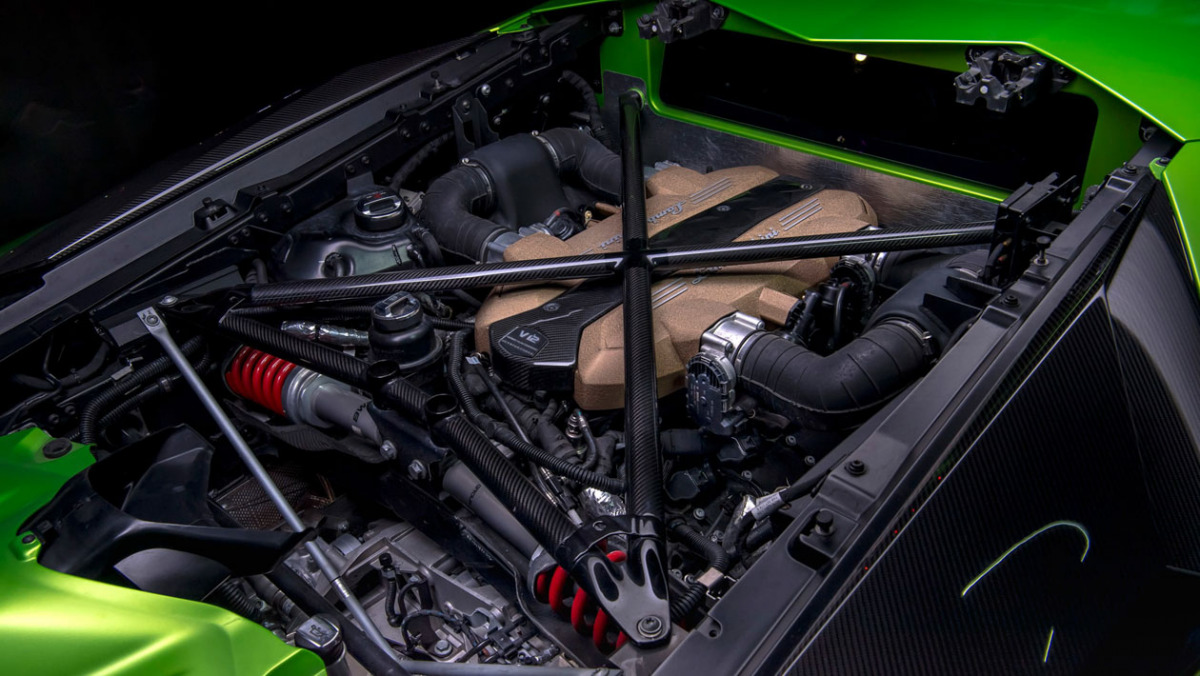 Supercapacitors, electric motors, 2000bhp and 0-160kph in 3.2sec are figures you can’t apply to the Lamborghini Aventador SVJ. So fast is the upper-crust of supercar design moving that in just three years, the innovations introduced on the SVJ back in 2018 don’t just pale into insignificance – they almost seem old-hat.

But like all good supercars there’s more to the SVJ than just facts and figures, and where it might exist in a vacuum of four-figure horsepower rivals, when you’re locked into its bucket seat, looking out through a true pillarbox windscreen having just pulled down the scissor door, we challenge you to feel the excitement Lambo’s Aventador always instills from the moment its V12 whirrs into life.

> The best supercars on sale today

The 6.5-litre motor has received another round of modifications aimed at squeezing not only more power from it, but also improving torque lower down the rev range and reducing the inertia of its internals. To that end, the V12 features titanium valves for the first time, teamed with a redesigned cylinder head, intake manifold and exhaust, the latter shorter in length and exiting higher at the rear, plus a lighter flywheel.

As you’d expect, the SVJ retains the long-serving automated single clutch gearbox, albeit with calibration changes. The 0-100kph figure is unchanged over the old SV (at 2.8-seconds), while 0-200kph takes 8.6 seconds and the top speed is ‘over 350kph’.

The core of the SVJ’s performance is the integration of its various systems under one umbrella (LDVA 2.0). Headlining here is ALA 2.0, a further evolved version of the active aerodynamics system first seen on the Huracan Performante. In simplistic terms, ALA features two slots in the nose of the car, with a further intake down the spine above the engine lid. With all these intakes closed the extended front splitter and large rear wing work as normal, increasing downforce by 40% compared to the old SV.

However, when the car is accelerating on a straight the front flaps open, preventing most of the air from going up and over the cockpit. This reduces the pressure on the splitter, forces air under the car (where it is carefully managed with a flat floor and a new, larger rear diffuser), and reduces drag.

At the rear, the flap opens, allowing air to rush into a Y-shaped structure that’s bifurcated, sending air into the actual structure of the rear aerofoil where it is then blasted out of tiny holes. These create vortices that disturb the air flowing over the underside of the wing, effectively ‘stalling’ it and thereby greatly reducing the drag. Clever stuff, and moreover, the left- or right-hand side of the wing can be worked independently, increasing grip on the inside rear wheel when turning into a corner.

Much of the suspension hardware in the SVJ is familiar, but it’s in the detail where the differences matter: anti-roll bars are stiffer, but spring rates are the same (as the S and SV); the dampers are recalibrated and operate over a wider bandwidth; the rear-wheel steer operates up to a smaller angle than on the S variant, and the ratio of the dynamic steering is fixed in the car’s Corsa mode. At 1,525kg ‘dry’, the SVJ weighs the same as the SV, but extensive use of carbon fibre and lighter wheels has essentially offset the weight penalty of incorporating the additional tech.

For all the talk of active aero and sophisticated electronics, there can’t be many who wouldn’t feel at least a slight pang of intimidation when the SVJ is sat in front of you – it’s impossibly low, impossibly proportioned and aggressive in a way that doesn’t just look motorsport-inspired, but exuding an extra layer of flamboyance that only Lamborghini seem to be able to carry off. AdvertisementAdvertisement – Article continues below

Lamborghini’s senior supercars have always possessed that intimidation factor, and long may it continue: it’s an essential part of the recipe. Up goes the scissor door, and as I sink into the hard embrace of the bucket seat I’m reminded once again at how comically uncomfortable these pews are, how short the Aventador is on headroom for drivers over six foot in height, and how visibility is compromised by the girder-like A pillars. In fact, it’s now even worse, because with all the ALA ducting rearward visibility is virtually non-existent, and the side mirrors are, as ever, mainly full of chiseled flank. The Aventador remains, in the truest sense, a proper supercar.

Nevertheless, some things are clear. The motor is an absolute force of nature: it does pull with a little more conviction from the mid-range, but it’s still all about the lunge for the redline, something it does with frenzied enthusiasm. Hook the sturdy right-hand paddle for the next gear and it thumps home without much grace, but the engine revs drop straight back into the meat of the powerband and the process begins again unabated. The engine noise at 8,500rpm from within the cabin is all consuming, and from the outside it’s utterly spectacular.

Brake hard from high speed and you can feel the weight of the V12 behind you, the car yawing gently, suddenly alive and on its tip toes. The giant ceramic brakes have a softer pedal feel than, say, one of McLaren’s more aggressive offerings, but there’s good modulation on offer and no questions over their outright stopping ability.

From the moment you turn the wheel into the corner the SVJ feels surprisingly agile, and it’s worth taking a moment to finesse your inputs at this point because driving the SVJ only requires small inputs most of the time. Traction out of the corners is equally impressive, but it’s the balance of the car that really makes it so enjoyable. If you’ve gone in too hot into a corner a small lift of the throttle has a surprisingly large influence on the trajectory of the car, without it feeling nervous.

There’s rarely a feeling of the engine’s weight threatening to overtake the front – in slow and medium speed corners, at least. Near its limits it’s surely still a car that demands the utmost of respect, but there’s always the invisible safety net of the esp system to rely on. Indeed, so deft is its operation that the ‘Ring lap time was recorded with some of its assistance left in place.

Yet the most encapsulating thing about the SVJ is that even on road, beyond these incredibly high limits there’s an approachable nature to the chassis and the balance keyed into it despite the locomotive-sized powertrain only inches away from the driver’s seat. It’s not so much a job to get the nose locked in – the steering is so sharp, precise and fast that it’s purchase is always dependable – but start augmenting the rear with the V12 and it’ll instantly neutralise, giving you options into and out of the corner. That the engine is also so acutely responsive helps with the intimidation factor, but over rotate the rears and the rear will swing subtly and swiftly at lower speeds and the SVJ could almost be called playful. Without an inherent sense of momentum to worry about, these low speed antics make it all the more tempting to take liberties, again, and again, and again. So while we’re sure this next generation of hybridised supercars will be even faster and even more exploitable, the experience an Aventador SVJ will likely remain.

The limited run of 900 SVJs are priced at $500,000 each and all are now spoken for. We were lucky enough to run a left-hand drive SVJ on our Fast Fleet, which came in at closer to $582,000 thanks to an expensive combination of exposed carbonfibre and a matt green paint job. Despite the price, it still lacked the ability to plug your phone into the 20 year-old Audi nav system, not to mention an inability to get any radio signal either. None of us cared.

This price point puts Lamborghini’s top offering somewhere in between the usual supercars like a McLaren 720S or Ferrari F8 Tributo, but still short of more expensive options like the Ultimate Series McLarens or Ferrari SF90. 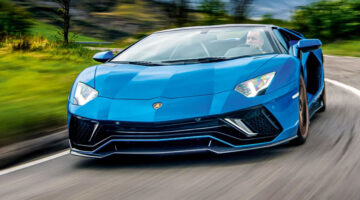 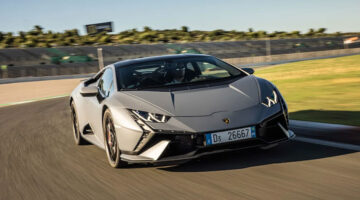