crankandpiston.com welcomes the Jaguar XF R-Sport to The Management Fleet

Hard to believe it now, but just nine years ago, Jaguar was looking in serious trouble. Heading out of an admittedly lucrative period with then-parent company Ford into a brand new relationship with the Indian TATA conglomerate, Jaguar’s headliners were nevertheless underwhelming: in the mid-size corner was the now oft-chastised X-Type, at the base of which was a front-wheel drive Mondeo that caused much chuckling at BMW, Audi and Mercedes-Benz; in the slightly heftier corner meanwhile was the S-Type, a company staple that handled reasonably and drove with sufficient refined aplomb, but nevertheless was badly in need of some cosmetic surgery, inside and out, visually and technically. Clearly some rattling by the throat was required in 2007. Step forward the newly developed XF.

Now THIS was more like it. Though Ford’s heavy steel-architecture remained at the base and it would be another seven years before Jaguar’s more efficient Ingenium engine range appeared, but Jaguar’s more muscular rival to the BMW 5 Series and Mercedes E-Class both looked and handled the part convincingly, a combination of improved structural rigidity, a fresh design DNA, and heavily updated technology ploughing a groove into which each of the company’s premium models would follow over the next decade. By 2015, the XF was due a refresh, Jaguar binning the chassis for an aluminium ‘heavy’ architecture and revising the aerodynamics to improve manoeuvrability and airflow respectively, but its job had been done. With its newly debuted F-TYPE, mid-sized XE and the company’s first ever SUV just around the corner, an all-new Jaguar had stepped up to the plate.

With drives of the newboy safely under belt at both the international launch HERE and on home turf HERE, the British marque’s mid-sized saviour now makes its way to The Management Fleet, the first Jaguar to do so in nearly five years at crankandpiston.com. And the potential it brings is enormous. 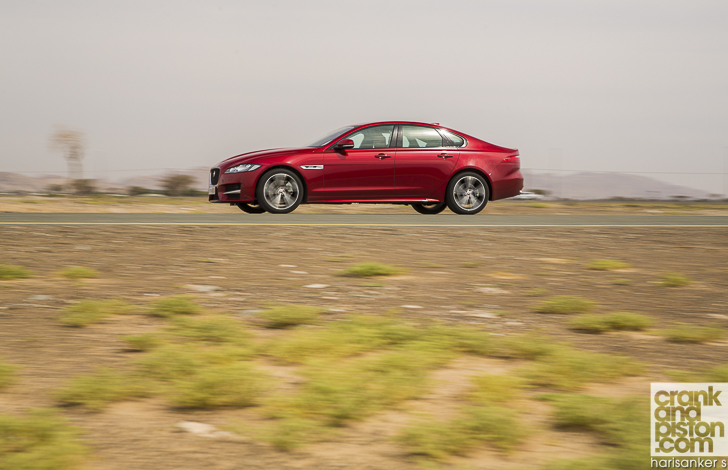 Peel back the rather handsome bodywork of our R-Sport newboy and you’ll find, as well as Jaguar’s lightweight aluminium architecture, a 3-litre supercharged V6 also serving time in the XE. Feisty little minx it is too, the V6 firing 335bhp and 332lb ft of torque to the rear wheels via a ZF eight-speed automatic transmission. That means that as well as a 250kph top speed, the XF will hit 0-100kph in an impressive 5.4 seconds. Bear in mind that’s on par (ish) with a Volkswagen Golf R whilst carrying ‘from 1710kg’.

Features and fittings on the inside are standard Jaguar fare, including an elegantly minimalist centre console, some choice ‘R-Design’ emblems on the sills and steering wheel, and those nifty air inlets that rotate open on start-up. Infotainment offers us the necessary from radio and phone connectivity to SatNav (once we have the right card, that is), while the four-way drive mode offers us everything from ‘Dynamic’ to ‘Eco’ to…well, ‘Winter’. We should also mention the two-tone leather upholstery, a nod to the pretty striking metallic red on the outside.

Now Jaguar‘s prominent mid-sized saloon is with us for the next four months. Time to see what else the evolution had to offer in 2007.