I got the chance to grab the completely new Jaguar E-Pace for a couple of weeks, which is shorter than our usual long-term tests, but I took it anyway as I wanted to find out for myself what all the hype was about. Jaguar’s second ever SUV shares underpinnings with its cousin the Range Rover Evoque, though during my time with it showed it to have its own distinct Jaguar personality.

To begin with, the size and design is more appealing to me than an Evoque, it just looks fresh and shares the design elements of Jaguar’s cars that I like, including the big grill and the exhaust tips being integrated in the rear bumper. The feline looks were pleasing to my eye, especially in that “Caesium blue” colour.The model we’ve been driving is the R-Dynamic, which comes with sportier body parts including different bumpers, a gloss black grill, and is equipped with the HSE trim which is the highest spec you can select from the R-Dynamic family.

Initial impressions are as advertised, it’s a compact SUV that combines looks with agility and dynamic driving. I was surprised at just how many heads turned for the baby cat, and I even found myself turning back for a second look. But what was interesting was that the majority of attention came from females (and I assure it wasn’t aimed at me), who maintained longer stares at the car, even more than what I usually get when driving around in most super cars. I kid you not! Even my not-car-person wife showed interest in the E-pace, suggesting it would be a great addition to the household.

Curiosity piqued, I went to the Jaguar website to check how much it’d cost if we were to replicate the specs on this specific E-Pace. Speccing an R-Dynamic HSE model, with the Matrix LED headlights, Meridian 15 speakers system, head up display, smartphone pack, adaptive dynamics, 360 camera, and a few other extras, we ended up with $12,800 worth of options bringing the total price to a hefty $75,645. At that moment, my eyebrows reached my hairline.

It’s unfortunate that the pricing of the car came to that number, only because I actually really liked how the car felt to drive and to use daily. It didn’t have much space in the rear seats but it had decent space overall, and with the optional features made for an interesting ownership proposition. On the other hand, even if you take out all the extra features and stick with a base trim, it’s a decent 246bhp compact SUV that looks good and drives nicely. It even comes with Pirelli P-Zero high performance tires which add to the dynamic on-road handling. Meanwhile the E-Pace managed a decent fuel economy of 12.3L/100km (against a claimed 10.4L/100km), a figure I was more than happy with.

While it was a relatively short period, the E-Pace made a significant impression on me. It won me (and my wife) over with its looks, I was impressed with the way it drove for a junior SUV and I even enjoyed using it on the daily commute. Shame about the pricing though. 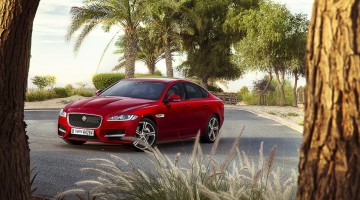