OPINION. Is the world ready for a convertible Ferrari 458 Speciale?

Rumour has it that Ferrari is about to unveil a convertible version of the 458 Speciale. Our deputy editor however wonder if this is the wisest of ideas… 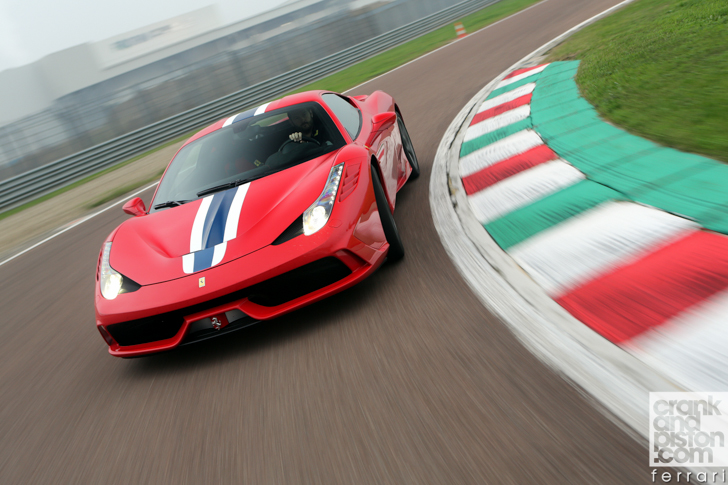 When Ferrari first unveiled the 458 Speciale one year ago, it was hailed as the closest the tifosi could get to a road legal 458 Challenge. The Maranello maghi tweaked this, ditched that and refined these to present the finest Ferrari driving experience one could have for $290,000. To Ferrari, and thus the automotive world, the 458 Speciale was ‘a completely unique model designed for owners looking for an even more focused sports car offering extreme driving emotions’.

Now, if rumours are to be believed, Ferrari is about to present a limited edition convertible version of this more focused sports car, the official justification for which is obvious. If you have a bulging portfolio of former owners who aren’t short of a few quid and for whom the chance of adding another Pininfarina-designed Italian sports car to their already impressive collection is one not to be missed, then the target audience will champing at the bit. Development of the 458’s inevitable successor meanwhile will already be in the works (the two-seater is now five years old, after all), and as Rolls-Royce has demonstrated many, many times, a new ‘special edition’ model to help keep names on the radar is no bad thing. Let’s also not forget that dropping the roof and thus allowing that wonderful V8 soundtrack into the cabin brings with it an all-new aural experience, one that anyone with a pulse would kill for.

This, however, is the 458 Speciale we’re talking about, a car set apart from the Italia on which it is based ‘to an extent unprecedented in the previous Challenge Stradale and 430 Scuderia special series’. As crankandpiston.com found out first-hand, this is much more than some cheeky racing stripes and a new set of alloys here. This is a Speciale, a whole new player and a name that comes with a $30K mark up on an ‘average’ Italia. 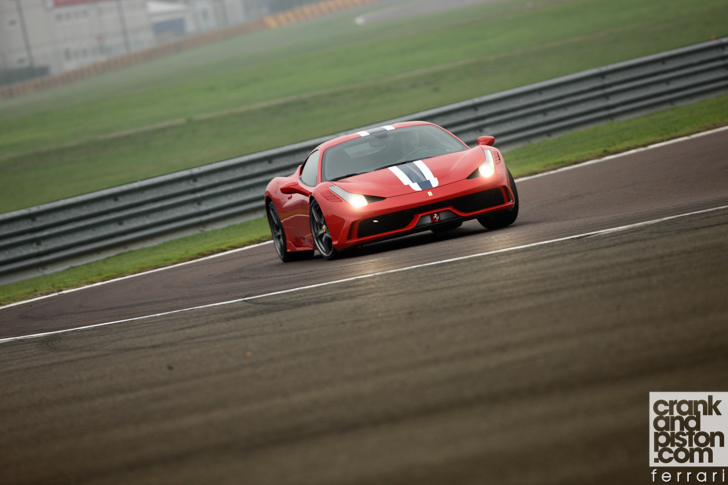 Included in its design is a number of Ferrari patents and world firsts. In the front bumper, three flaps – two vertical and one horizontal – close at higher speeds to improve air cooling to the radiators, but at speeds above 220kph, the horizontal flap lowers to improve overall downforce, and thus stability through the corners. Fins in the rear bumper electronically lower to reduce drag, whilst a more aggressive rear spoiler helps press those grippy Michelin Pilot Sport Cup2 tyres onto the tarmac. Then there’s Side Slip Angle Control (SSC), a funky name for a fantastically complicated system that calculates speed into a corner, lateral slip of the tyres on the road surface, and apportions power where required to the traction control for optimum grip. And if you’d like the longer version, click HERE then catch up with the rest of us later.

Ferrari also went fanatical with its weight saving regime to drop the Speciale a couple of belt loops to 1290kg, 90kg less than the Italia. Thickness of the glass used was re-thought, and even ‘luxury’ items like the radio and floor mats were scrubbed (though Ferrari decided against binning the air conditioning) for that all-important ‘racing-inspired atmosphere’. The Speciale then is all performance with little of the pomp, save some tributary blue and white go faster stripes. It is, as far as Ferrari is concerned, the epitome of sporty driving. So why, given all the effort that went into honing such a weapon, would Ferrari undo so much of its hard work by lopping the roof off? Doesn’t the significant loss of rigidity this entails as well as the resultant increased weight rather knacker those 0.35 drag co-efficient figures Maranello had previously been banging on about? 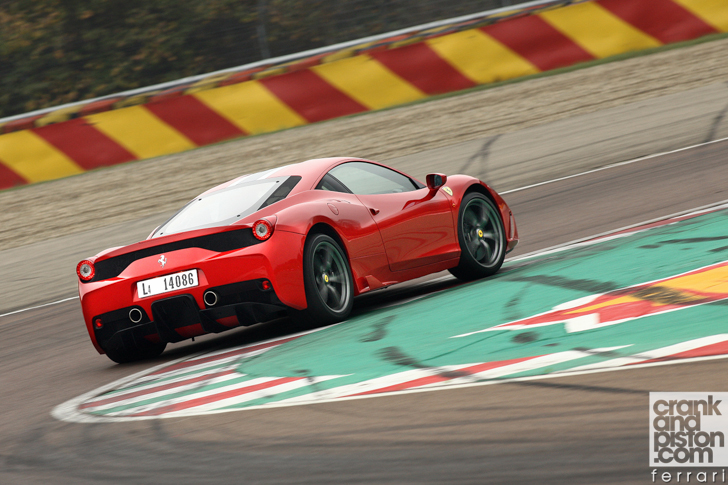 One could also argue that with ‘the most powerful naturally aspirated V8 ever built at Maranello’, 597bhp on tap and a power output of 135 cv/l – a world record for a road-going naturally aspirated engine – a topless Speciale will still prove one hell of a machine. That the as-of-yet-unnamed Spider will perhaps drop a tenth or two of the hardtop’s 3-second 0-100kph time and a 9.1-second 0-200kph time is irrelevant, since this will still be pretty bloody fast. Perhaps, but it does put the ‘more focused sports car offering extreme driving emotions’ claim into a fresh perspective. If the whole point of the Speciale was its big shouty engine, you wouldn’t hear us complaining. But consider again SSC, increased downforce, significant weight reduction and months upon months of track-honing runs for that final, perfected product. Were these developed with a convertible in mind? Like McLaren’s MP4-12C, built around a MonoCell chassis that could withstand structural integrity despite losing the roof, was the track-hewn Speciale originally conceived as a convertible? Colour me sceptical…

One could also argue that if you have nearly $300K to spend on an expensive toy you’d like to hurl at the landscape as the wind parts your hair at 120kph, then that’s your decision thank you very much. And power to you. Marketing a new Speciale that offers Ferrari performance with the heightened aural experience that comes with any convertible driving means they’ll be few of the new Speciale Spiders left on the shelf at Maranello.

To these people though I also ask, what’s wrong with the 458 Spider, a machine that lops almost 50K off the asking price yet offers no less of that Prancing Horse magic? So entranced was crankandpiston’s own Phil McGovern when he drove the 570bhp Spider on its international launch three years ago that he – in his own words – was ‘nearly brought to tears’. The sense of occasion, combined with that awesome soundtrack and phenomenal handling offered a happy medium that could barely be faulted, despite(!) that 27bhp deficit to the Speciale. Conversely, my time with the 458 Speciale at Fiorano produced much maniacal laughter thanks to the unapologetically precise handling. Sure, a hardtopped Italia would have been suitably impressive around the company’s official test track, but experiencing what a stripped out, track-honed Ferrari could really do when it rolled up its sleeves was on everyone’s minds that day last November. It’s difficult to imagine a convertible ‘track weapon’ creating the same buzz. 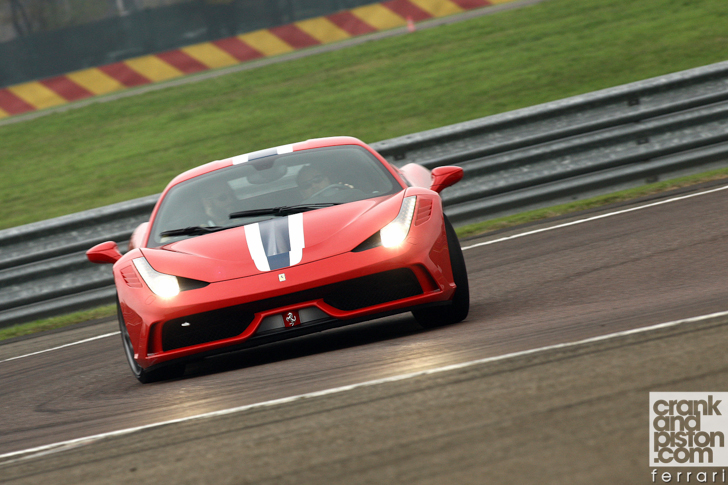 Perhaps I’m being a touch blinkered in my view: how ‘emotional’ for instance would a drive in one of the most iconic, Scarlet machines on the planet with upwards of 10,000 kilometres of blue sky above your head truly be? We’re guessing quite. I just wonder though whether a convertible version of ‘the most high performance Ferrari V8 sports car ever’ is missing the point. To buckle a racing harness, get comfortable in the very firm, very supportive carbon fibre-backed bucket seats and select Track mode on the multi-function steering wheel would get the blood pumping before a lap of the Yas Marina Circuit or even a sodden track day at Donington. But would it really stir the blood on a Sunday afternoon drive in a way the Italia Spider could not?

If you happen to have a Speciale Spider on order, be sure to let us know.