Having hit the 10K mark, The Management Fleet Infiniti QX70S is overdue for a service…

In what seems to be becoming traditional on crankandpiston.com, it was only a couple of weeks before a message flashed up on our Infiniti QX70 S that a service was due. And since we’ve now leapfrogged the 10,000km mark, it was a biggie too.

Fortunately, unlike our previous service visits, nothing sharp or spiky was removed from the wheels, the air conditioning seemed to be working fine, and the oil temperature hadn’t dropped off the scale. The slightly more concerning news though was the rather poor brake wear we discovered, unsurprising for a media test model used to being thrashed to high hell, and an explanation as to why feel for the discs had been a bit vague over the opening couple of weeks. With the pads replaced, the tyres duly thumped and the bonnet lifted and closed (I’ll speed past the mundanities involved), the QX70 S was given a clean bill of health and was back on the road. And my word, was there a sizeable difference to the braking…

Just as well, since our thoughts on the performance side of our sporty SUV are not without issue. The centre of gravity, for instance: for an sport utility family wagon, perfectly acceptable; for a more performance-derived model, it’s just too high to really get on the power out of the corners without the inevitable waft of body roll and mild understeer. The stiffened suspension does in fairness attempt to counter this, though this only manages to harden the ride and makes the car less comfortable than it otherwise could, or rather ‘should’, be. And if it’s a really sporty drive you’re looking for from 5ft in the air, the slightly limp handling might not be to your tastes. We are also curious to know, whenever we select the SatNav, why it’s necessary to remind us that we should not use this system on the move. Every. Single. Time. We. Use. It. 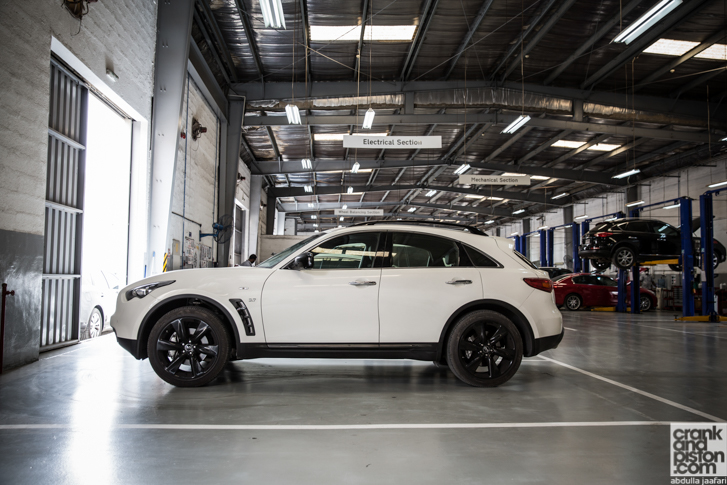 On the plus side though (calm down Infiniti shareholders), cabin room is pretty good, the boot can easily swallow two German shepherds (we’re nothing if not thorough), and – for all our whining – the QX70 S is actually quite fun to drive. Off the line for instance, abrupt power delivery from the V6 can cause the front wheels to spin, creating a good game for us on the commute to and from the C&P Oval Office: can we feather the throttle but still have that Golf GTI in the outside lane? Similarly the gearbox is impressively responsive, shifts ultimately pretty snappy through the paddle shifters.

But so far the QX70 S is proving more SUV than Sporty. With or without the new brake pads.