It’s the end of the road for The Management Fleet Infiniti QX70 S, but has it done enough to convince our man of its capabilities?

I don’t mind admitting, I’ve agonised over the QX70 S’ ‘fare thee well’ article for some time now, since I’m not a massive fan of performance crossovers. When offering the comfort and practicality of an SUV with the sport-tuned aggression of a sports car or hot hatch, this results in compromise, and rarely for the better.

Such is the case with the QX70 S. Long gear ratios – required, alongside 267lb ft of torque, to simply get the 1960kg semi-behemoth rolling – mean acceleration is not as energetic as the ‘S’ badge would suggest. Piloting an Infiniti that’s almost as wide as a Bentley Continental can, on occasion, be hair-raising through traffic, not least because rear visibility is hampered by those enormous C-pillars. Though upshifts through the seven-speed gearbox are crisp and sprightly, downshifts prove a little more ponderous. And while you can’t reasonably expect Wrangler-levels of off-road capability from a sport-tuned crossover, still the QX70 S doesn’t feel at home on the rough stuff. 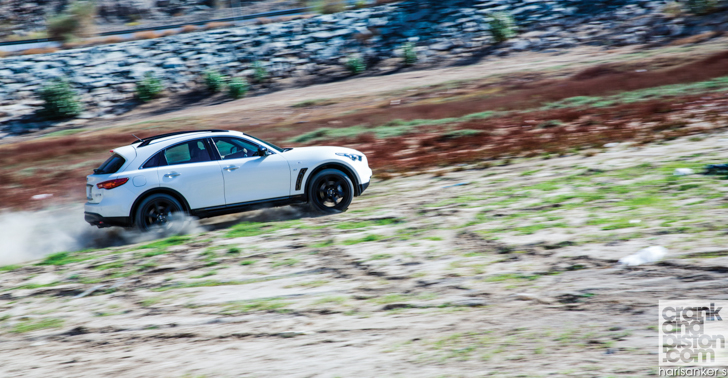 By this logic then, I really shouldn’t like the Infiniti. And while it’s unlikely to make my ‘Top 5 SUVs’ bucket list, still I feel a pang of regret that our time together has come to an end. Yes, a high centre of gravity means hustling through mountain roads required some large-gussetted brave trousers, but huge amounts of grip from those wide, low profile tyres at least helped keep traces of understeer under control. Peak torque from 1750rpm meant that acceleration, though perhaps not overly dramatic, was devoid of lag. The squat stance and stiffened suspension made the ride a tad firm, but did at least ensure flat(ish) cornering. Nicely weighted steering meanwhile and the surprising precision that came with it (give or take a bit of lightness off-centre) means the QX70 S was surprisingly enjoyable to chuck into the corners.

Plus, for all the big, brash menace on the outside (I’m looking at you 21in six-spoke dark alloys) refinement on the inside was really rather good, an occasionally incomprehensible Sat Nav aside. Diamond-stitched sports seats both looked the part and offered good lumbar support, legroom for the rear bench was generous even considering the sizeable boot space, and the infotainment system was largely straightforward to use. The rotary dial cooling seat system may need more juice for the Middle East, but on the whole, the interior received a collective thumbs up from the crankandpiston.com team.

So, not the most dynamic or practical of sporty SUVs I’ve ever driven, and tough to back over the segment rivalling Volkswagen Touareg in terms of value for money. Still, on its day and on the right roads, the Infiniti QX70 S could still throw a few surprises. And I’m going to miss that.