Infiniti is trying its level best to separate itself from parent company, Nissan. And with new models like the Q60 arriving, it’s obvious that work is paying off.

Infiniti’s Q50S is a thoroughly decent car that’s quick and luxurious but still lacks that certain something to make it truly desirable. That something, however, is present and correct with its sexy cousin, the Q60 S – a two-door beauty that packs an almighty 400 horsepower wallop and genuinely thrilling driving dynamics.

The package is a tried and tested one, with the brand having previously built the G35 and G37 coupes, which were always rather rakish and handsome machines. But the Q60 S is in a different league and its performance is breathtaking thanks to its twin-turbo V6. The muscularity of this unit should not be underestimated, for it provides slingshot acceleration without ever feeling remotely stressed – 100kph from a standstill is possible in less than five seconds but it’s the mid-range pummelling that leaves the most lasting impression.

It’s no tail-happy tyre smoker, at least not with all Infiniti’s rather useful driver aids on watch, but it does manage to feel urgent and connected to the road. Much of its prowess stems from its stiffer damping compared to the Q50 saloon, meaning you can really hammer through tighter corners without it getting all out of shape. Its ‘Dynamic Digital Suspension’ is an active set-up that does a remarkable job of disguising the Q60’s 1,800kg bulk, endearing it with sharp responses and a feel of fleet-footedness at odds with the numbers you know it’s contending with. 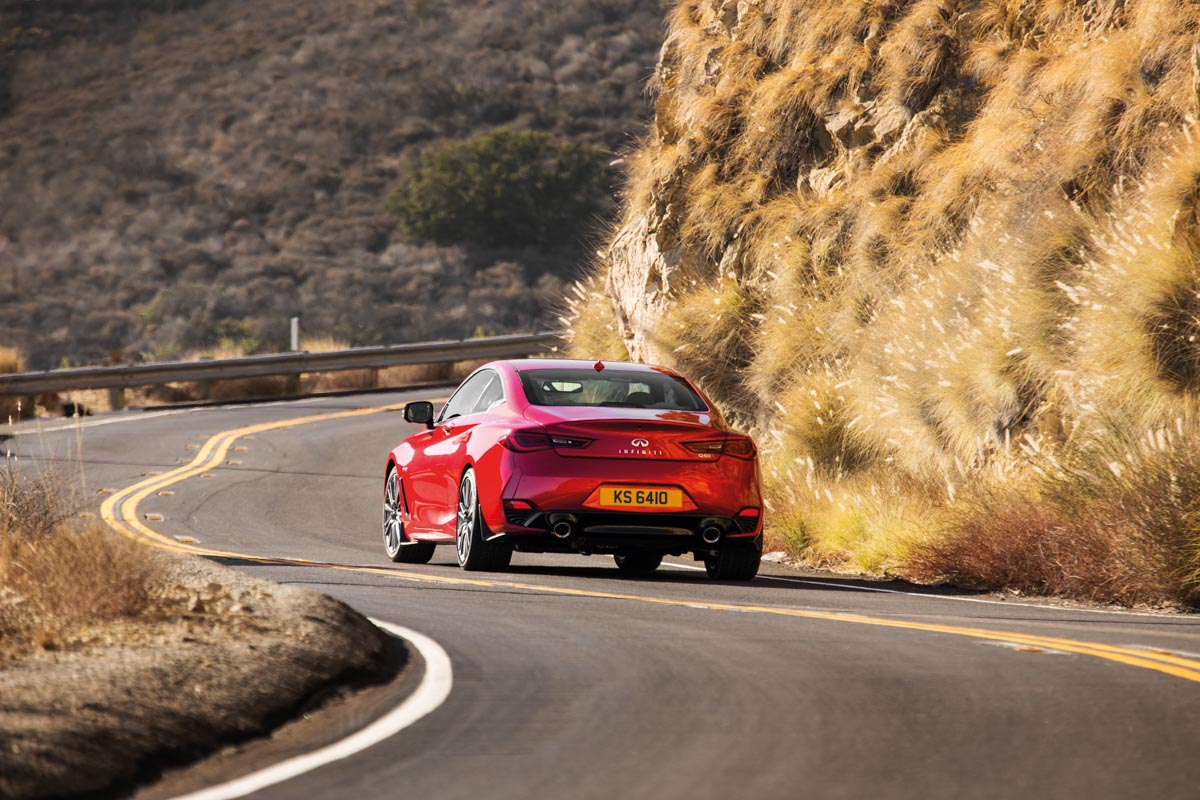 There are things that rankle, however. The front seats are mounted a bit too high on the cabin floor, which means even an average height driver’s head will clash with the roof when taking speed humps at anything more than a crawling pace. There’s precious little room in the rear, too, although that’s normal for most coupes. The seats themselves are extremely comfortable and supportive, clad in particularly lovely hides, and while the cabin ergonomics aren’t up to Merc levels of design inventiveness, there’s little to complain about apart from the occasional cheap plastic surface and the mess that the glossy glass of the infotainment interface gets into after a few minutes of prodding with less than immaculate fingertips.

The Infiniti must square up to some incredibly good competition, with BMW’s M4, Audi’s S5 and Merc’s C63 AMG all offering bags of poke, character, and prestige. But they’re common as muck compared to the Q60 S and cost considerably more. Its cabin trim quality can’t quite match the Germans, and an M4 would make a more convincing prospect if you fancy the occasional track day, but this Infiniti can hold its head high in such luminary company and offers a tantalising view into what this much-maligned brand will be offering with its future models. It’s absolutely enormous fun.

Previous ArticleVIDEO. The 2018 GMC Terrain. Peace of Mind.
Next Article Car paint protection film – what is it and does it work?