We wave goodbye to The Management Fleet Infiniti Q50 S after an eye-opening three months of driver assistance systems.

When we first welcomed the Infiniti Q50 S to The Management Fleet three months ago, we were looking forward to sampling its 326bhp 3.7-litre V6, sport-tuned suspension and ‘performance’ brakes, the looks of the newboy alone suggesting that what we’d got our hands on was something very special. And the early signs were positive. There was decent poke from Infiniti‘s V6, good low down torque, and the steer-by-wire steering – once you’d got used to it – still proved on the nose. By week’s end, we could hardly tell the difference between cogs/links and accentuators, thanks to decent heft and good balance. The front end was a little heavy though and a host of technical driver assistance systems meant that getting frisky with the back-end was a bastion solely of the imagination. Indeed, allowing each of these systems to take care of the brakes, the throttle, the gears and the steering, left the driver with surprisingly little to do save tune the radio. And Bluetooth connectivity meant we didn’t even need to do that.

Not exactly the hallmark of a hoon machine then. But what at first we took to be unnecessary electronic nannying started to make much more sense on long highway-heavy journeys. Two or three hours behind the wheel was less exhausting than expected thanks to Adaptive Cruise Control and Chassis Control, which respectively maintained cruising speed and kept the car in lane with a series of minute steering adjustments. It’s a system that worked less well the sharper the corners became, but on the monotonously long straight sections, the Chassis Control was a revelation. Even that sport-tuned suspension – which could be altered via the five-way Drive Mode – didn’t unduly affect the ride comfort. 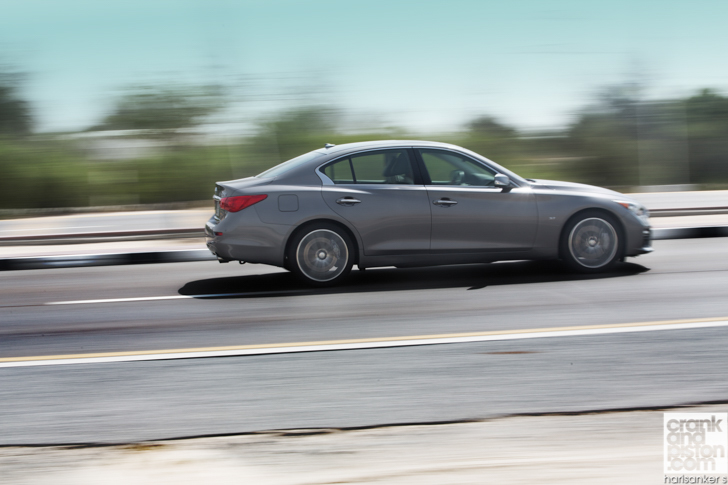 One thing that was difficult to ignore in the Q50 S though was the sheer number of warning beeps. You can forget, for example, about changing lanes without indicating (the system’s shrill note of disapproval will stay with me for a while). In the cabin, there were a few issues that proved inconsequential to the rest of the guys on the team. The headrests may be ergonomically A-plus for instance but have been designed to push the head forward slightly. Not a problem with short, back and sides, but using one with a ponytail will leave your neck craned further forward than is comfortable. Something else that began to grate was the plastic housing just in front of the throttle pedal, on which I would catch my foot every time I moved to press the brakes.

Though perhaps not as dynamic as we were hoping for, the Infiniti Q50 S has nevertheless been an eye-opener for the crankandpiston team. Some are still unsure if driver-assistance takeover is a route they want the motoring world to take. It’s difficult not to be impressed however with what could become mainstream in just a few short years, and to be tempted when that day comes to say ‘we were there when…’