At this year’s New York Motor Show, Jaguar unveiled its brand new XF, and crankandpiston.com was keen to find out from the company’s design director what goes into bringing a vision to reality.

“The original XF broke the mould. It shocked people, and I’m very proud of that. It’s beautifully subtle, and in five years time it’ll look just as good as it does today. It started a new journey for us.”

When you consider that Ian Callum’s (thus far) 16-year stint at Jaguar has included projects like the XK, the C-X75 concept, and the F-TYPE (not to mention the Escort Cosworth, Vanquish and DB7 during his previous tenures at Ford and Aston Martin), the XF sports saloon may seem an odd choice for his proudest accomplishment. Given the success the S-Type replacement has garnered though during a hitherto eight-year life cycle, this would be a very blinkered view.

In 2014, Jaguar recorded its best sales figures for nearly a decade, due in no small part to the quarter of a million XFs sold since 2007, even despite strong opposition from the BMW 5 Series and Mercedes-Benz E-Class. This, plus popularity for its extended range – including the Sportbrake estate and the lunatic XFR-S – saw many cite the XF as vital to Jaguar’s ‘resurgence’ after several decades in the wilderness. So successful was the XF in fact that, thanks to plaudits from some of the automotive world’s top publications as well as other industry bigwigs, the XF has since become Jaguar’s ‘most awarded model ever’. And when you consider the iconic models this includes across the company’s 80-plus year history – the XK 120C, the Le Mans-winning XJ220 and the iconic E-Type to name but a few – that’s no small claim. Even The Camping and Caravanning Club named the XF as its tow car of choice in 2012… 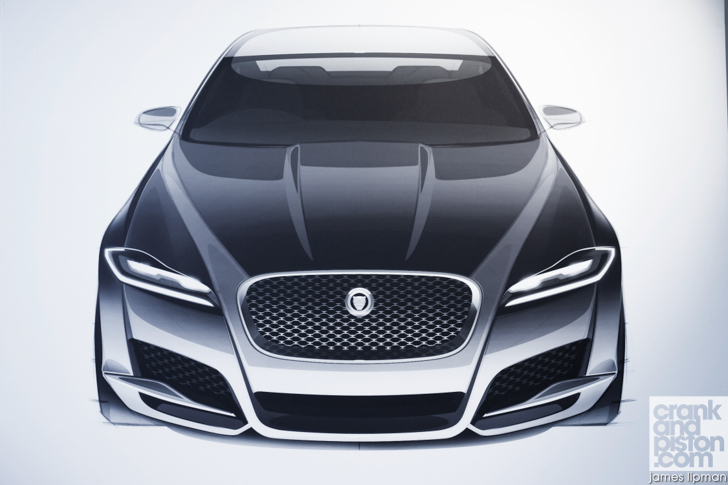 The unveil of the second generation XF at the New York Motor Show then – for which crankandpiston.com has a graciously received ticket in its breast pocket – is a big one for Jaguar. Even less surprising that Design Director Ian’s enthusiasm is through the roof. THIS after all is the replacement to the car that brought Jaguar ‘back to the surface’.

“We’re coming to the surface now and people are suddenly going, ‘oh, overnight success’,” Ian continues as showtime approaches. “But I started this journey 15 years ago, and the XF is now seven or eight years old, which means development on it started 10 years ago during the Ford era. And at that time there was resistance to the XF, both internally at externally. But I had enough supporters at Jaguar to push it through. So change was happening at Ford, and still is even more so with TATA, who basically said ‘do what you have to do, but you have to grow’. And from that has come the F-TYPE, the XE, and the new XF. It’s all part of building up the family.”

Our conversation goes on for several minutes before a microphone is tapped, a hush goes over the assembled crowd, and the official opening remarks get underway. Shortly afterwards, the silks drop to the floor, and raucous applause is directed in the new XF’s direction. One can see Ian’s point: like it or not, the XF is a big step in Jaguar’s continuing resurgence.

It’s a handsome beast too, one that – though not radically different from the generation it replaces – has been developed through one key philosophy: simplicity. 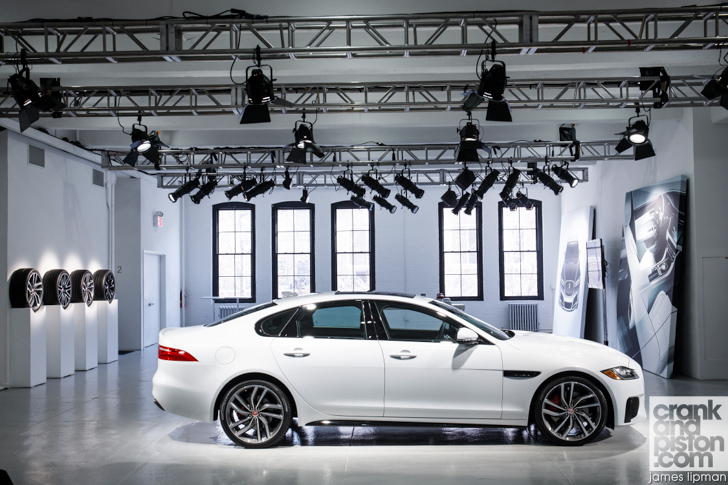 “The way I look at it is that the XE is sporty, the XF is sophisticated and the XJ is indulgence: you need the chandelier in the XJ effectively,” Ian continues. “But in creating the all-new XF, we have been driven by the discipline of simplicity. Every exterior line has a clear purpose, nothing is superfluous. It’s all too easy to add lines to a car, but much harder to add character by leaving lines out.”

Having started with a clean sheet of paper during the development phase, there’s been some key – albeit not radically different – changes made to the sport saloon’s overall look. It’s the first Jaguar for instance to boast full-LED headlights, complete with the marque’s now traditional ‘frown’. There’s a more upright mesh grille and a yet-further prominent nose for a more purposeful front end. The distinctive (ahem…) ‘power bulge’ meanwhile has been inspired by the 1968 XJ6, a model incidentally that encouraged a 14-year old Ian Callum to become a car designer.

As we move past the sweeping coupe-style profile (aided by the less-is-more bodylines), we find more subtle chrome detailing at the rear than on the previous model, roundel-like taillights inspired by the E-Type and the Jaguar graphic as first seen on the F-TYPE. It’s a look finished off with the ‘constant face’ you’ll see across the Jaguar board for at least a few years to come.

“We’ve got an image of the family – all done digitally – for the next three or four years. It’s a family look basically, one that gives people a sense of confidence in the brand. People may say they all look similar, but hey, so does a BMW, or an Audi, or a Mercedes. Not that long ago Jaguar was lost, people forgot about it, and it became very old and traditional. Part of my job was to rejuvenate it, and we created a fun face – a very pretty face I think – starting with the original XF. Everything has evolved from there.” 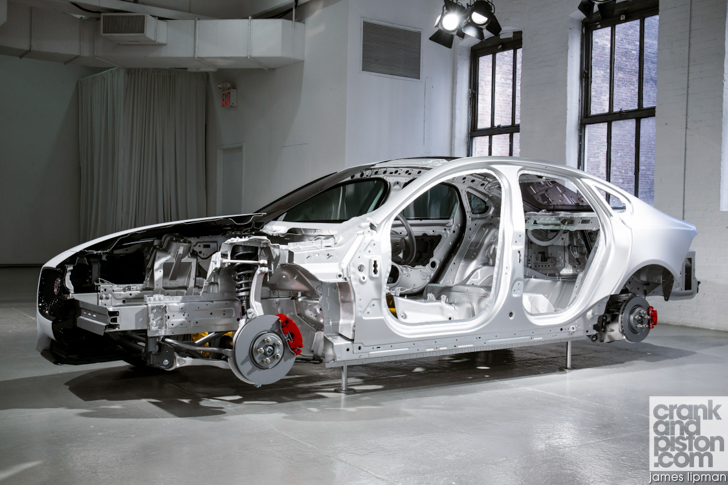 Arguably more significant than the new look though is the development beneath it. Both shorter and lower than its outgoing predecessor, the flexibility of Jaguar’s innovative aluminium intensive architecture means the new XF actually houses a larger wheelbase, resulting in more room in the revised cabin. Moreover, the aluminium-heavy compound equates to both a 190kg weight saving over the older model and a 28 per cent increase in structural rigidity. Couple that with a new Intelligent Driving Dynamics system – an all-wheel drive setup theoretically produces rear-wheel style handling but with better traction – and a new range of Ingenium engines, and the ‘sophisticated’ XF could further surprise when it finally hits the road. And this is before we even get to the revised cabin…

“Actually a lot of the interior was inspired by the previous XF in terms of the metal finish. But we created this new look to break away from this notion that we should have a wooden dashboard. I said ‘let’s do a metal one, let’s just break the rules’. It’s about authenticity, so it’s real metal and real materials. And the idea behind the ‘Riva Hoop’, as we call it, is something we discovered when we did the XJ. It offered a distinctive line – a flow – to the dashboard, so we’re putting it on all our cars.

“With the new XF we were looking for more: more driver centric, more from the interior, more technology, more efficiency. Basically just more XF. And in designing a car of this type, alongside the XE, there’s an enormous number of factors that would pre-determine where you are. An enormous number. And you have to work around them. You can’t just dismiss them. You can’t complain about them! They’re to be dealt with. That’s what design is about.”

Time will only tell whether the XF has what it takes to break the mould once again. Few would deny though that Jaguar is off to a strong start. And after 15 years in the wilderness, who frankly would begrudge them that?