After dealing with the headaches involved with installing new wheels, Steve enjoys some track time with the Nissan 350Z

This month has been full of excitement and change for the Nissan. I finally managed to buy some tyres, albeit not the ones I originally wanted. I’ve come to the conclusion there are absolutely no Nitto NT05 left in the Middle East in the size I need, and I’ve instead opted for some Invos. I can always switch to semi slicks on the new wheels for pure track events…

The WORK wheels are now finally on the car, along with new lug nuts and ARP wheel studs. This was not done without a fight though: four separate trips to the tool shop in Mussafah were required before I had everything I needed to install them (I even ended up buying an impact wrench for my compressor to get the job done with the wheel studs). The work required prior to installing the studs was slow and by no means painless. I was eventually forced to completely disassemble the rear brakes along with the handbrake assembly to allow the longer ARP studs to be seated. I haven’t driven the car more than a kilometre since installing the new wheels as she needs an alignment, but I will hold off until I have installed all my new suspension parts. Also, with the new wheels and suspension she still sits a little high, but the KW Clubsports will sort that out. I’ll be heading down to the Prodrift Academy workshop to do all the suspension work myself as they have offered me the use of their car lift. I’ve also started instructing drifting at the Prodrift Academy this month. Perks of the job I guess.

Earlier in the month I took the 350Z to a Drift UAE practice event held on Yas Marina Circuit’s skidpan, and was surprised when only one other participant showed up. Samer Khadra from Drift UAE brought his Competition R32 Skyline to the track and we took turns burning rubber around a track that we laid out to suit both our cars. A fast 3rd gear initiation had me drifting my car faster than it had ever been drifted before. The poor drum brakes in the handbrake really took a beating all night and suffice to say I’m glad I had that spare set of tyres. By the end of it all I was very happy with the way my Z is performing. Now I just need to install a hydraulic handbrake.

Good progress has been made this month, and it has me fired up about the 350Z’s potential. She’s turning into the handling monster I had envisioned almost three years ago. 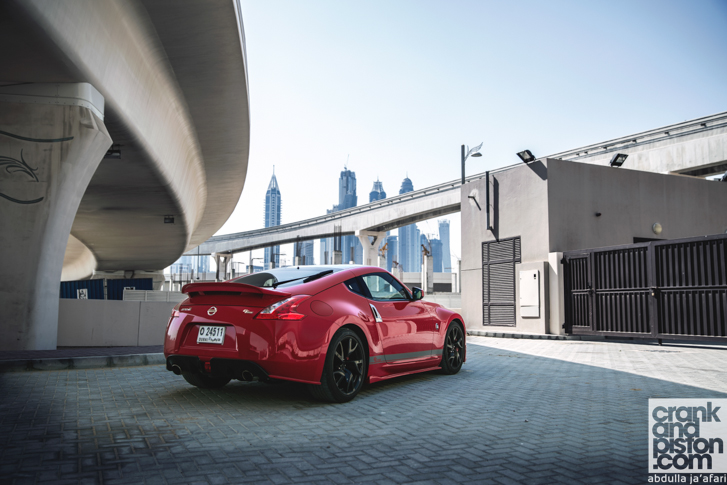