crankandpiston takes an in-depth look at this modified Hyundai Genesis Coupe, with carbon fibre galore, support from ARK Performance in the US and Chrome & Carbon right here in Dubai, UAE. 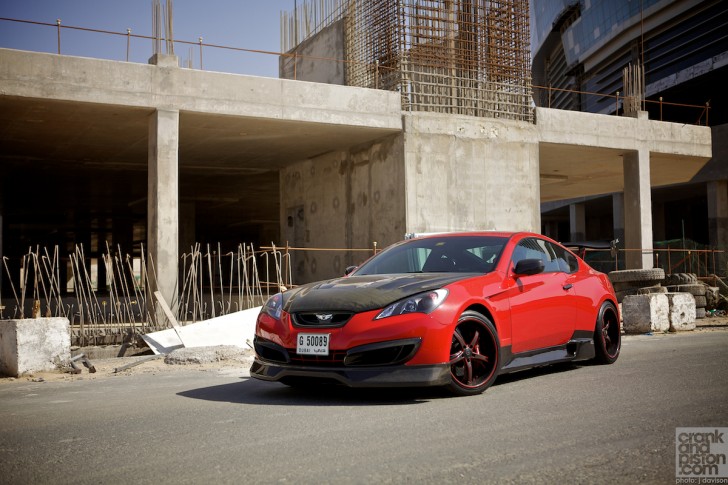 When we took the new Hyundai Genesis Coupe for a spin recently, we couldn’t help but marvel how much the Korean manufacturer had developed in a relatively short space of time: from the bad old days when customers were likely to laugh out loud at Hyundai salesmen making a pitch, now you have a genuinely competitive products for the BMWs, Audis, Mercedes and Lexuses (Lexi) of this world. 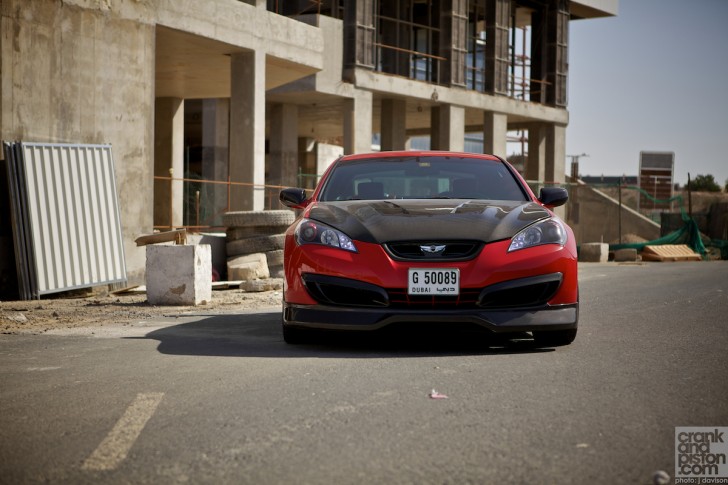 Local businessman Ziyad Mohamed clearly thought so too. So much so that when the Genesis Coupe first came to the region four years ago, he and his business partner (also his brother) Khaled immediately went and bought one.

“I was starting a car modification business – RKZ Performance – which was similar to the one I had in Canada a few years ago,” Ziyad explains. “The Genesis is quite a unique car in its category, since Hyundai weren’t really known for making sporty coupes. But this was in the same category as the Nissan 370Z: 300+hp, six-cylinder engine, and sport-tuned suspension. It was an excellent formula and the price was really good. We wanted to show ‘what we can do’, and the Genesis Coupe was perfect.” 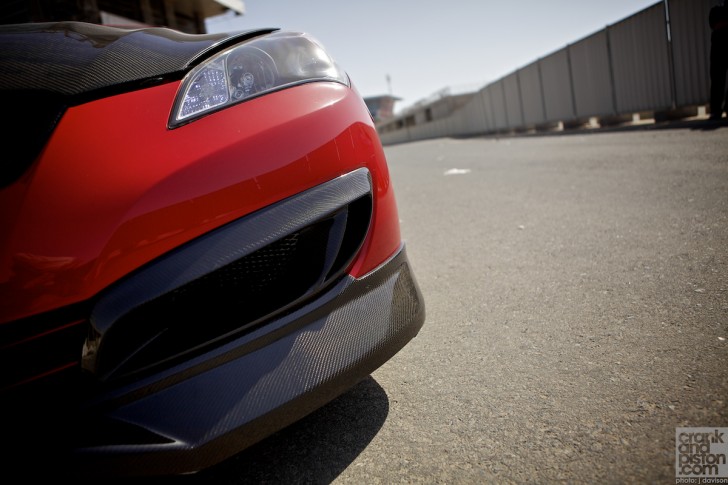 No little amount of work has gone into the modded coupe you see before you, so it was hardly surprising – following a chance encounter with both Hyundai and its owner in Dubai’s Motor City – that we wanted a closer peak. Ziyad, keen as mustard to talk about the work that has gone into this 2010 model year coupe, was only too pleased to oblige. 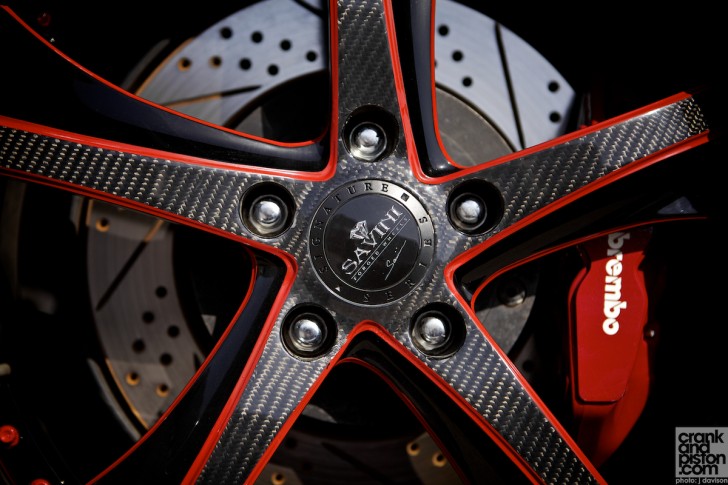 “With the brakes, the only thing we’ve done is put on slotted cross-drilled rotors, and these are Brembos. Plus we’ve replaced the pads with performance versions, but the original callipers were good enough. The hood, the trunk and the fog light housing come from SEIBON. The rear wing comes from APR and the front fenders have changed. They are fibreglass. Oh, and the head and taillights are custom made to work with the hood.” 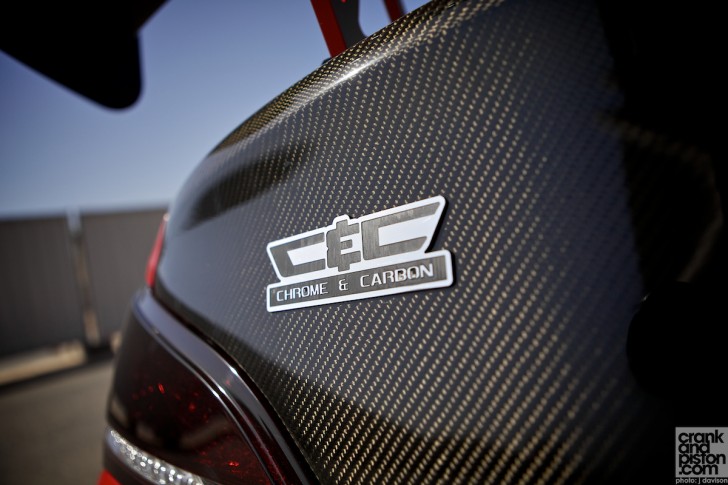 That leads us nicely to this, the various carbon fibre accoutrements that adorn the Genesis (even the door handles have been specially built). One sure fire way to make a race-spec machine lighter, faster and look more aggressive – if motorsport has taught us anything – is to load it up with lightweight carbon fibre. Of course, it’s a tad more complicated than that.

“The wheel rims are carbon fibre coated, and come from Sevini,” Ziyad continues. “Those were hand picked and they cost a fortune! Carbon fibre rims – proper carbon fibre rims – are about $7000 apiece, not for the set. Unless you get them from a prime source, stay away, because they can easily break. So these are magnesium alloy rims, coated in carbon fibre. The fitting was done here in Dubai at Chrome & Carbon. 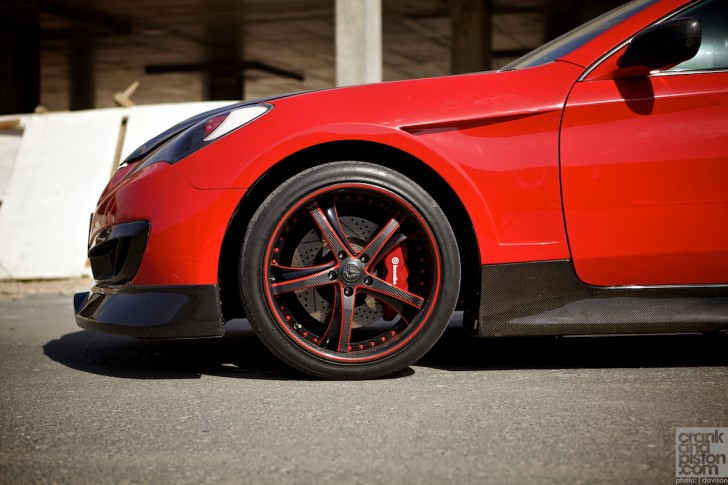 “The tyres are special size, and are a little wider. They are Japanese Nitos, and are performance tyres. But to be honest, they are not the best for these roads. They tend to lose traction on fine sand.”

A blast of warm air hurtling through Motor City that immediately flicks a grain or two in my eye emphasises that point nicely. Of course, as well as the various performance-focused elements of the Genesis comes one or two nods to personal style: the exterior colour for one thing, and the ornate hood emblem. Each was chosen to differentiate the Hyundai from everything else on the road, though the colour took slightly more time than expected to nail down. 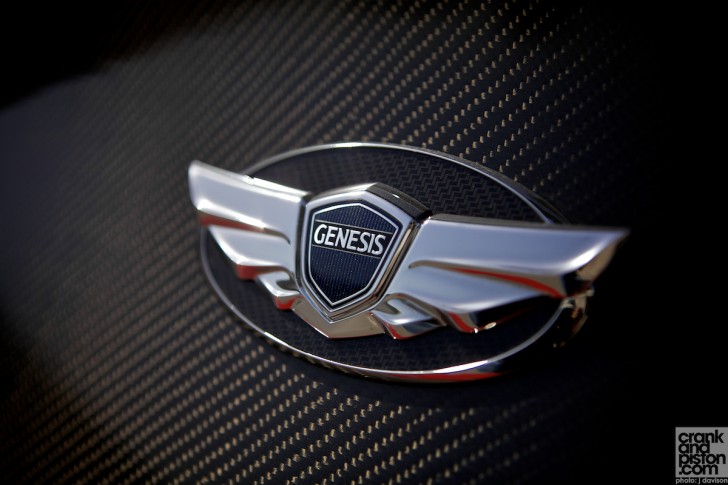 “It was actually my brother’s idea. The first choice was lime green, because with the carbon fibre it stands out really well. My personal second choice was white, because again the contrast would have worked out really well. But after a bit of conversation, we opted for the red.

“You’ve probably noticed I’ve changed the emblems too, and these are custom. There’s nothing wrong with the Hyundai emblem, but I felt this one with spread wings suits the personality of the car much more. To the power and the poise.”