How to build a car for the Queen of England

We head to Buckingham Palace and talk to Bentley’s director of Royal and VIP relations about how to built a car fit for a queen.

We’ve done interviews in some pretty cool places, but never in the grounds of a royal palace before. We’re at the Coronation Festival in the gardens of Buckingham Palace, London, the official home of Her Majesty Queen Elizabeth II. And we’re chatting with Richard Charlesworth, the director of Royal and VIP Relations for Bentley.

As one of the Royal Warrant holders, Bentley gets to make use of its royal connections when marketing its services. And its chief way of showing off is by pointing out that two of the Queen’s official state cars are Bentleys. So we asked Richard – just how do you go about building a car for the most famous woman in the world?

Have some history with the family

Back in the day, Bentley and Rolls-Royce were the same company, and that company gave then-Princess Elizabeth a Rolls-Royce Phantom 4 for her wedding in 1947. She was a fan, and started using Rolls-Royces as state vehicles when she became queen in 1952.

In 1977, for the Silver Jubilee, the firm created another Rolls-Royce and for the Golden Jubilee in 2003, they offered yet another vehicle.

Keep Her Majesty up-to-date with developments

“We were sold by Vickers in the late ‘90s and bought by Volkswagen,” Richard said. “Throughout that sales period I was in the PR team. Because the Queen wants to be well informed I was speaking to the Palace everyday and she was very informed through the whole process. She understands it better than most people because she followed the whole story through.”

Under the terms of the deal with Volkswagen, Bentley kept the Rolls-Royce name for five years.

“So we went to the Royal Household in 1999 and said ‘could we build a new state car for you for the Golden Jubilee, as we did for the Silver Jubilee 25 years before? But it’ll be a Bentley’. Because she understood the history of the company and the sale, she said ‘that’ll be fine, thank you very much’.”

Show her the work in progress

“We presented initial renderings of two different design directions to the household in 1999,” Richard said. “One was traditional, one was a bit more modern. They said ‘she’s traditional, go with the traditional one’.

“We then worked that one up and came here to Buckingham Palace into the cinema. We put up the renderings of the interior and exterior. Our former chief of design came and we talked to the Queen and the Duke of Edinburgh through all those designs. It was quite interesting; because she’d had Rolls-Royces up until then, we made the Bentley quite Rolls-Roycey, with lots of chrome. And the first thing she said was ‘it’s a bit ostentatious, can we take some of the chrome off?’. So we did.

“The interior of the car has leather at the front and cloth at the back. The rear seats are cloth because she comes from a generation when the horse-drawn carriages were in operation, and the bloke sat on the outside, who got wet, sat on leather. That was utilitarian. Inside was rich wool cloth. They always see leather as for the ordinary people. So it’s always cloth in the back.

“We’d put wood on some of the sides, where the armrests are. The Duke said ‘that’s not practical. If I’m wearing military uniform, with a sword and belt buckles and everything, it’ll bang on it’. So we took the wood out from there and left it on the doors, but not anywhere that he would bang into. There were practical inputs from both into the design.

“We built a full-size clay model which we took to Windsor Castle. We put it in the Royal Mews and painted it to look like a normal car. From 20 yards away, you’d say it was a car. We put what was then the old Rolls-Royce state car next to it so the Queen and Duke could see both together. That was great. She said there was nothing she would change.”

“The engine is from the Arnage R, the 400bhp version of the big 6.25-litre V8, twin turbocharged,” said Richard. “In those days we had the Arnage R and the Arnage T, the sporty one. But this doesn’t need to have that engine so we’ve got the more refined version. It’s set up with the head chauffeur who joined us when we were doing the testing, so that during the procession speed of 9mph (14kph), it’s not going in and out of gear. The gearbox is set up not to change at 9mph. It has cruise control and will happily cruise at 120mph (195kph) if you want it to. But not at 9mph. When you’re in a procession with other cars, carriages, horses, you want to be in full control, so you wouldn’t want to use it.

“All the suspension was enhanced, the braking system enhanced for the extra weight, and there was the normal recalibration of electronic systems for weight and different dynamics.

“The security systems I can’t talk about for obvious reasons, but you can guess. A lot of the systems though are standard. I’ve tested the validation car at Millbrook Proving Ground and there was a certain other manufacturer doing a press launch and we were going past them on the hill route. It can move.” 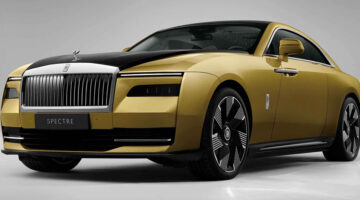