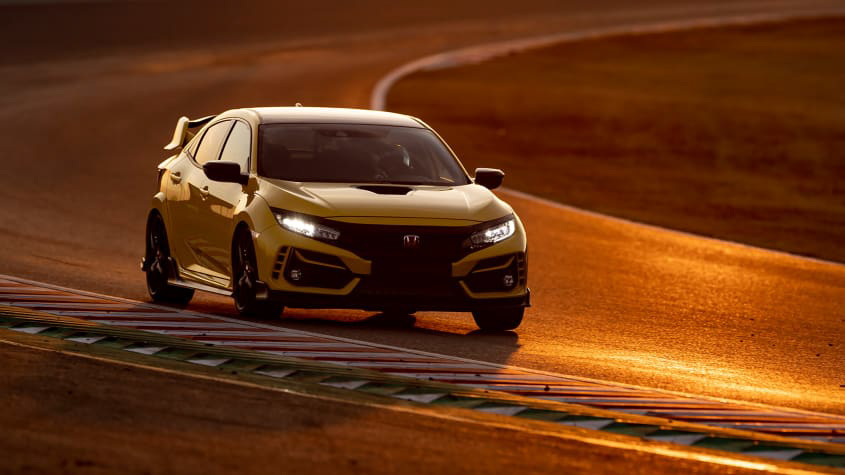 Honda revealed two new Civic Type R derivatives earlier this year, the subtler Sportline and the more extreme Limited Edition. As the Civic Type R is our current hot hatchback class champion, the stakes are high for these new models not to disappoint, but early signs are very encouraging.

The new versions go in two different directions, with the Sportline maintaining the Civic Type R’s mechanical components, but pairing them with a less aggressive exterior design, smaller wheels, retuned dampers and extra sound insulation inside.

The second, and arguably more exciting model, goes in the opposite direction, being a very limited edition stripped of superfluous kit, and instead fitted with new forged wheels, Michelin Cup 2 tyres and a retro paint finish. These two new models come alongside a wider refresh of the existing GT model for 2020, and all three share a host of other updated features.

Honda has now revealed that the track-focused range-topper has added another accolade to the Civic Type R’s name, breaking the front-wheel-drive lap record at Suzuka Circuit in Japan. During final testing in February of this year, the Limited Edition covered the 6.1-kilometre track in only 2:23:993, two years after the standard Type R GT broke the front-wheel-drive lap record at the Nurburgring Nordschleife.

Honda’s updates across the Civic Type R range are subtle, but meaningful, especially as Honda rarely applies technical upgrades mid-cycle. The changes begin with the suspension hardware, featuring new front bushes and low-friction ball joints on the front MacPherson struts. The new elements have been designed to make the already pin-sharp steering even more direct, while the rear multi-link set-up features eight per cent stiffer lower bushes too. The dampers have also been recalibrated, and vary slightly between the different models, something we go into in more detail below.

The brakes are the same-size Brembo units as before, but now utilise more thermally efficient two-piece discs and a pedal travel shortened by 15mm, giving the pedal a more resilient and aggressive bite point, particularly during heavy track use. The new discs also reduce unsprung weight by 2.5kg.

Aesthetically, the new Civic Type R also includes mildly redesigned front and rear bumpers, the former of which improves airflow into the front-mounted intercooler by 13 per cent, while inside, the Type R now features an Alcantara steering wheel, and a centre console borrowed from US-market Civics that never lost the volume knob (praise be).

Exemplifying Honda’s highly detailed approach to this 2020 update is the new aluminium gearknob, which is not only a different teardrop shape referencing the one found on early Type Rs, but also includes a 90g counterweight inside the casting that makes the knob itself feel more substantial during changes. The infotainment system is still the relatively old-fashioned grainy affair as before, although within it Honda has introduced a new telemetry system and performance monitor dubbed Honda LogR. The new system not only captures data, but can also download it to an app on your phone and coach you on certain racing circuits to improve your lap times – if you like that sort of thing.

Mechanically the Civic Type R utilises the same 2-litre turbocharged four-cylinder VTEC unit as the current model, with identical 316bhp and 295lb ft power and torque figures. Performance numbers as a result are the same across the board, with 100kph coming up in 5.7sec, and topping out at 272kph. What is new is a sound-generation system, similar to that which you’ll find in many modern hot hatchbacks, which has been designed to augment the previous Civic Type R’s somewhat breathy engine tone.

The previous range-topping GT model remains with these changes applied and a new Racing Blue paint option, but it’s the two new variants that are more interesting. A $50,128 price tag for the Limited Edition has been confirmed with a release date penned for August – the UK will receive just 20 of the 100 EU-only units, and all have already found owners.

The Honda Civic Limited Edition has been designed to top the current range, stripping out some of the unnecessary elements from the GT and new Sportline models, while offering a few new additions to make this the most exciting Civic Type R in recent history. Starting with the new 20-inch forged BBS alloy wheels, these new items save 10kg compared to the standard 20-inch set on the GT, and are wrapped in Michelin Cup 2 tyres. The dampers have been subtly modified to suit the lower unsprung mass of the new wheels (and brakes), but Honda claims its calibration is close to that of the standard car.

Inside, Honda has removed the air conditioning, infotainment system and a load of interior sound deadening which all adds up to a total 47kg weight loss, resulting in a 1353kg kerb weight – 47kg more than the Renault Mégane RS Trophy-R, but then it still has rear seats and won’t hit quite such a high price point. Aside from the new wheels, you’ll most likely pick out the Limited Edition by its Sunlight Yellow paintwork, which has been directly inspired by the yellow hue made famous on early DC2 Integra Type Rs and the JDM-specific EK3 Civic Type R. The roof panel, fake bonnet duct, and mirror caps are finished in contrasting gloss black for maximum nostalgia points too.

For those who think the standard Civic Type R looks a little boisterous, Honda has responded with the launch of a new Sportline model that leaves the dynamic package largely alone, but tones down the standard Type R’s rather aggressive styling.

The red pinstriping and stacked rear wing have been replaced with subtle alternatives, the latter now a low-rise unit that doesn’t look any more aggressive than the one seen on Civic Sport models. The wheels are also a smaller 19-inch diameter, and paired with a less aggressive Michelin Pilot Sport 4 S tyre.

Inside, the bright red bucket seats have been replaced with black alternatives, although red stitching and dash trimming remain. The same two-tone Alcantara steering wheel and new gearknob from its siblings also remain, which is good.

Set to launch in August, these two new variants, alongside the range-wide updates, seem to answer the few criticisms we levelled at the current Type R. No pressure then.