They’re both undoubtedly excellent machines, but which of the two Japanese legends will come out on top? 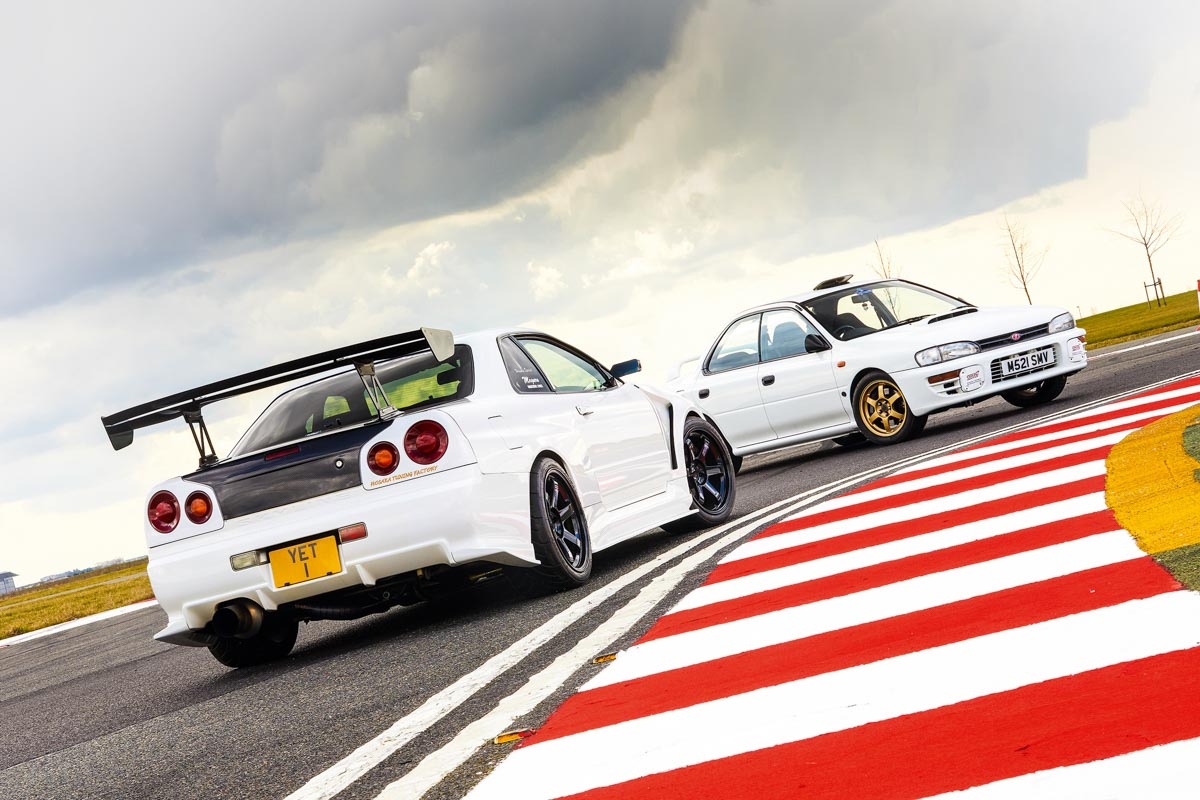 The hardcore sporting car can be found in all four corners of the earth, from the minimalist lightweight French hatchback to a special-edition Aussie V8, but the Japanese strain of the hardcore driving virus is particularly infectious, provoking strong feelings of a partisan nature and often combined with an overwhelming desire to individualise – to modify. Japanese tuning is a way of life for some people, and while plenty of the visual stuff isn’t for us, the cars and much of the work that goes into making them faster still most definitely is.

While Japanese hardcore motoring could potentially cover a very broad remit right up to the present day, you and I both know what we’re really talking about – that rich seam of performance classics built between roughly 1989 and the mid-noughties; the Impreza, NSX and Skyline GT-R era.

And there’s my first – entirely innocent – mistake, because I’ve left out the Mitsubishi Evo. Not mentioning the Mazda RX-7 was a potentially abuse-generating faux pas, too. But that’s the point in a way: there were so many great driver’s cars developed in Japan during this era that you’re spoilt for choice, from something as humble as a higher-spec JDM Mazda MX-5 Mk1 to a twin-turbo Supra (those are two more I left out) and all those screaming Type R Hondas (and another one). Until recently prices were, in the main, very reasonable, although that has shifted considerably of late, and you may have to look hard and at something slightly less obvious if you’re on a tighter budget. Japanese manufacturers in this era loved to make a hardcore special, and while you can enjoy them in their factory form, you can also tune them into something altogether different. Here we have an example of each – and it’s just a drop in the ocean of what’s available and what’s possible.

It doesn’t get much more hardcore than a Type RA Subaru Impreza. What the moniker actually means has been a little mysterious over the years, but ‘Record Attempt’ is one meaning and ‘Rallying Group A’ another. Either way, it stands for a car that’s about going very quickly indeed, and emphatically at the expense of creature comforts. This white Impreza here is the very first STi version of the GC8 Impreza WRX, in Type RA form, dating from 1994.

Need an instruction manual to decode that? Well, turbocharged, four-wheel-drive Imprezas weren’t badged WRX in the region until the advent of the Mk2 in 2000, but the JDM Mk1 Impreza WRX equates roughly to what we all knew as the ‘classic’ Turbo 2000 in the region. Ordering your mid-’90s Subaru sports saloon in RA-spec meant you were either a Banbury-based rally team about to build a shell up for a certain C or a keen amateur goer or hill-climber who didn’t mind winding the windows up and down manually if it meant saving a vital few kilograms. Add in the spicy STi bits – the high-revving motor quoted as being on the voluntary Japanese power limit of the day (276bhp), and the brilliantly short gear ratios for maximum accelerative potential (many of these cars melted their engines in the region due to constantly running at high revs on motorways) – and you have a car that may have windows and a roof, but is as focused and uncompromising as any pure sports car. Note that the STi version even got a roof air vent – it doesn’t get much more Group A homologation fetish than that. At 1200kg (or even less for a -STi RA) it is wonderfully light by modern standards. Yaris GRMN-light, virtually. It’s surprisingly small, too, and its fundamental shape is so inherently bland it’s a reminder that the original Impreza legend wasn’t built on design or a conventional marketing-led image at all, but through rallying, the ability of the road cars, their value-for-money and the tuning scene.

On the move the RA is fantastically agile, wonderfully intimate and rapid, and, of course, possesses a rumbly soundtrack that will always be what a real Subaru should sound like, whether blasting sideways through Hafren Forest or keeping people awake in a town centre at night.

If you’re of the Lancer Evolution persuasion there is no less choice. With Mitsubishi’s great homologation special virtually every version could be called hardcore, let alone the models that fulfilled the Type RA role, namely the pared-back RS that was every bit as spartan as its Impreza equivalent. First-generation Evos (1-3) are harder to find and more for the Evo collector, so it’s the wonderful second (4-6) and third (7-9) generations that you’re more likely to be looking at. Thankfully, apart from Tommi Mäkinen versions of the 6, in red, most of these cars have yet to become hugely inflated in price on the ‘investment’ market, so it’s possible to find a tidy Evo 6 for below $20,000, with earlier models even cheaper.

Driving an Evo – any Evo – on any kind of journey is a hardcore experience; you don’t need to find a great B-road. The sharpness of its responses and the whole unfiltered nature in which it works as a machine has no real equivalent today. They simply don’t make cars like this anymore, and what a great pity that is.

Buyers of either the Impreza or the Lancer are often obsessed with originality, and understandably so, but what really can cause trouble is rust. Corrosion isn’t something that usually troubles our minds here at evo because we deal in predominantly new or nearly new cars, and no one expects them to rust. However, these are Japanese cars based on fairly basic designs that date back to the early 1990s, and decades of salt spray and harsh winters can reduce them to scrap. Evo chassis legs at the rear, for example, often need to be cut away and replaced in major surgery by a specialist. Of course, you could import a car directly from Japan, and these tend to be in vastly better condition – at least underneath.

Let’s talk GT-R. It’s hard for anything else to get a look-in today when there’s a modified Nissan R34 Skyline GT-R parked up in the Bedford Autodrome pitlane. Even the Speciale struggles to garner much more attention, and that’s before the big RB26 in-line six fires into life – as you might expect given the visuals, it’s loud. Like most of the cars we could feature in this group, there was once a time when Skylines had relatively little value, and the original RB26-engined four-wheel-drive R32 could be had for five grand.

Unsurprisingly, those days have sadly long gone for those of us with more meagre means, and the top of the market – for late-production R34s in specific colours – can break the $131,000 barrier for the right car.

Most of those collectors (many stockpiling cars for when they can be officially imported into the US) are after standard-specification examples, and as anyone who knows Skylines can tell you, a standard GT-R is a rare thing. That makes cars that have been tuned well, especially as complete projects by respected tuning houses, a way into the market at more sensible prices. It’s also a relatively cheap way of getting a 600, 700 or even 800bhp car compared with the usual supercar routes into this kind of firepower.

Is it hardcore? In the main, very much ‘yes’. Perhaps a standard R33 GT-R is a little more towards a sports GT than a bare-knuckle road-racer, but the R34 put a lot of the aggression back, and the GT-R’s six-cylinder engine was specifically designed to handle a lot more power in racing: that’s why so many road cars are heavily tuned, because the temptation is hard to resist. It may be four-wheel drive, but something like this white GT-R is a brutal experience, far more physical and demanding than its present-day R35 equivalent.

If you’re after a more conventional alternative, there’s always Toyota’s Supra, but it’s getting hard to find good, manual-gearbox examples these days. Not many came to the region officially, and the Japanese don’t like to see their best cars leaving the home country – something that applies to the original NSX as well. The Supra is much more of a GT, too, so to qualify for status it’ll need some modifying. An NSX Type R would do it, but prices of these are in Ferrari territory. Thankfully, you can get at least some of that manic revving experience with an EK9 Civic or DC2 Integra Type R. Like I said, the choice is tantalisingly huge. I’m off to look at early Impreza classifieds…

Previous ArticleAston Martin Vantage review – can it match the Audi R8 and Porsche 911?
Next Article Mazda MX-5 review – Japan’s iconic roadster is better than ever 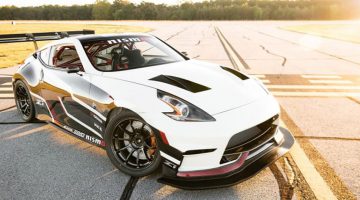