2015’s Goodwood Festival of Speed celebrates the fast and the reckless.

One of our favourite motoring festivals is the Goodwood Festival of Speed, held on the south coast of England. It’s a weekend filled with hundreds of cars of all shapes and sizes, set in the beautiful surroundings of the Goodwood Estate.

Organisers have just released details of this year’s Festival of Speed, set to run from June 25 to 28, and it looks set to be another cracker. This year’s theme is Flat-Out and Fearless: Racing on the Edge, and pays tribute to the drivers and constructors that have gone all out for victory over the years.

Each year there’s a huge central sculpture built outside Goodwood House to celebrate a manufacturer’s contribution to motoring and motorsport. This year, that honour goes to Mazda, celebrating its history and the new MX-5.

Highlights of the festival announced so far include the first appearance of MotoGP legend Valentino Rossi, who will be riding his Yamaha race bike up the famous hill climb to celebrate 60 years of the company.

Five Formula 1 teams have been confirmed, including the current champions Mercedes, and seven Mercedes-Benz 300 SLRs will be on show to mark 60 years since Sir Stirling Moss won the 1955 Mille Miglia.

The early days of motoring will be celebrated, chiefly by the first public run in 101 years for the frankly insane 28-litre Fiat S76. There’ll be a huge US contingent too, including NASCAR legend Richard “The King” Petty and the godfather of drag facing Don Garlits.

Derek Bell is a regular feature at the Festival of Speed, and his careeer will be marked by a special class of at least 12 cars, including his first Le Mans winner – the Mirage GR8.

The Moving Motor Show returns, showcasing the latest machines from manufacturers actually driving rather than sitting stationary, and the Cartier Style et Luxe showcase returns for the finest concours machines. 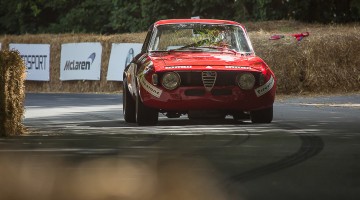