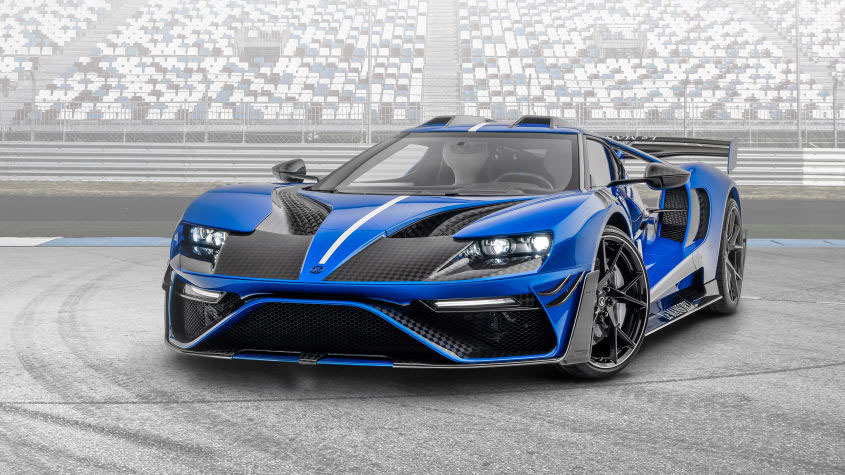 Though limited-run models from Italy are made in fewer numbers, the latest Ford GT has become renowned for its strenuous application process and subsequent exclusivity. If this didn’t make it exclusive enough, however, three owners can now send their cars to Mansory for a full conversion, drastically changing design and increasing performance.

This is far from a mere ‘decal and wheels’ conversion, with seemingly every exterior component replaced with a remodelled Mansory counterpart. Width has increased by 5cm thanks to the use of new carbonfibre bodywork, and almost every unpainted section now bears Mansory’s trademark checkered carbon weave.

The front end has been entirely rethought, with smaller headlight units allowing for aerodynamic tweaks and larger intakes. A unique textured piece now leads out of the GT’s bonnet vents and around the cockpit, and because one’s simply not enough, Mansory has also included dual roof scoops.

View it from the side and you’ll notice the addition of a new side intake ahead of the rear wheel, with dramatic sills and exposed carbon elements to be found throughout. Forged 21-inch YN.5 wheels are also now fitted, as if Ford’s high-tech carbon items weren’t enough.

Peer into the engine bay and you’ll find that even the factory carbon engine cover has been replaced with a body-coloured Mansory item. Modifications at the rear make it more akin to a Le Mans racer than a road car, with the entire rear section remodelled to adopt a more aggressive diffuser, triple exhaust exits and new aerodynamic components.

Some 638bhp from standard isn’t anything to be ashamed of, but after tweaks to the ECU Mansory has extracted an additional 62bhp and 70lb ft of torque from the GT’s 3.5-litre twin-turbocharged V6, bringing total output to 700bhp and 620lb ft. Thanks to the additional power and improved aero, top speed is now said to come at 355kph, 6kph higher than standard. No new 0-100kph time has been quoted. However, the factory 2.8sec figure will be enough for most.

No full Mansory conversion would be complete without changes to the interior, and so you’ll find body-coloured sections on the door cards and dash, alongside new white and blue Alcantara throughout.

Although pricing hasn’t been disclosed, just three examples will be produced.