Next year the inaugural season of FIA Formula E – the all-electric series promoted by Formula E Holdings – will hit the track, much as the new zero emission car did at the hands of ex-Formula 1 driver Lucas Di Grassi at the La Ferté Gaucher circuit near Choisy-le-Roi, France.

The new electric car, the Spark-Renault SRT_01E incorporates electric motor, gearbox and electronics from McLaren Electronics Systems and batteries from Williams Advanced Engineering. The single seater made its global debut at this year’s Frankfurt Motor Show. As part of the series’ consortium, each chassis of the 42 cars ordered for the 2014-2015 inaugural season was constructed by Dallara, runs Renault systems and will run on Michelin tyres. As part of Di Grassi’s test, the SRT_01E – designed and built by French based Spark Racing Technology – was fitted with a 50kw battery for its 40 lap run, some 25 per cent smaller than the 200kw (270bhp) electric motor the car will run in competition.

Though drivers have yet to be announced, three-time Indy 500 winners Andretti Autosport has confirmed that it will run one of the seven teams already confirmed for the 2014-2015 season alongside fellow IndyCar runners Dragon Racing. Following its brief tenure in F1 from ‘06-‘08, the Super Aguri name returns to competition in Formula E, while Audi Sport, e.dams and China Racing also confirming entries.

The season is set to kick off in Beijing, China in September 2014 and conclude in London, UK, in June 2015, with stopovers in Malaysia, Hong Kong, Uruguay, Argentina, the United States, Monaco and Germany in-between. 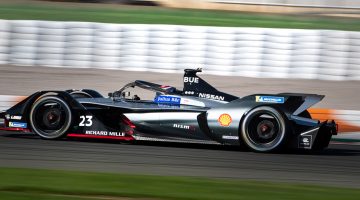