How do you launch your new motorsport film? If you’re Red Bull, you deck a Ferrari F40 in snow chains and send it up a ski slope in Japan. 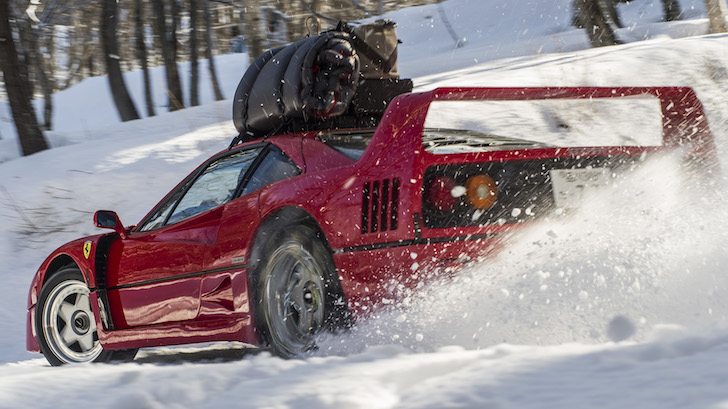 This is not the first time we’ve seen Red Bull pissing around with internal combustion on ice, since it wasn’t that long ago that we brought you WRC king Sebastien Loeb’s first shot at RallyCross and 900hp Pro4 racing trucks. And we all remember Max Verstappen in a Red Bull Formula 1 car with snow chains. Interestingly though, this is not even the first time we’ve seen the Ferrari F40 being dealt one form of punishment or another, the 80s supercar being pitted against LaFerrari among others in ‘Big 5’ and the guys at ‘Tax the Rich’ designing a specialist farmyard gymkhana course for their F40 GT.

This though really is something else, given that Red Bull’s latest video takes place at the Ryuoo Ski Park in Japan – the home of drift – and features the F40 (and unwieldy cajones) of Takeshi Kimura, who some of you might remember took said 478bhp, 323kph, twin-turbocharged legend on a camping trip a few years ago. Behind the camera of ‘Snow Camp Feat’ is Japan-based director Luke Huxham (familiar I’m sure to our long term readers) who was so dedicated to the project, that he specifically requested PIAA rally lights be mounted on the F40 for the right ‘cinematic effect’ during the night stages. That and, well, they look cool as frozen balls on the snow-capped Ferrari.

Other than the time-honoured ‘if you have a ludicrously expensive Italian supercar and a place to shoot it for days on end, why the hell not?’ approach, ‘A Day In The Life’ marks the launch of Red Bull’s motorsport channel.