Does the singularly focused Ferrari 488 Pista have the upper hand over the identically powerful McLaren 720S Track Pack? 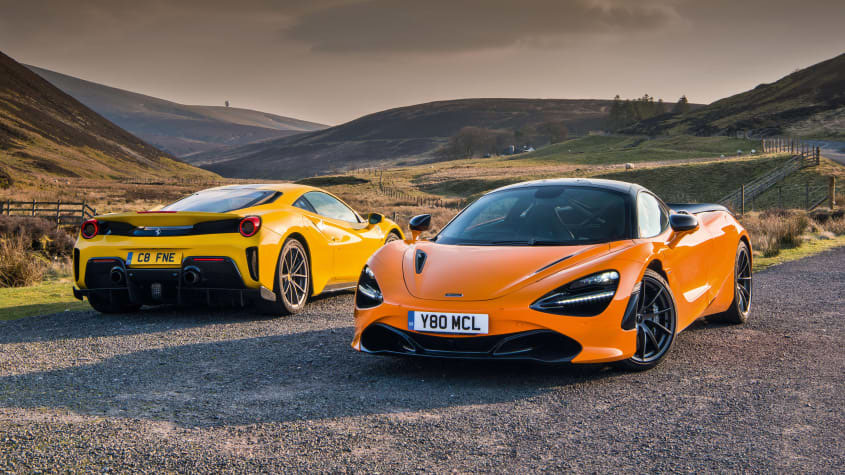 McLaren’s latest Longtail has arrived to take on Ferrari’s 488 Pista, but with identical 710bhp outputs, how does the less focussed 720S Track Pack stand up to the hardcore 488? We discover how the protagonists from Modena and Woking square up to each other on Scotland’s finest roads.

Of course, it’s not a fair fight; comparing oranges and lemons, almost literally given the hues of these two. The Pista is a special forces version of the 488, while the ‘S’ in the 720S denotes its place in McLaren’s regular army, albeit the equivalent of an airborne elite. But the core 488 and 720 ranges are very much toe-to-toe, and the Track Pack fitted to this 720S is at least a step towards the all-out hardcore focus of the Pista. Consider it a preamble to when the Super Series Longtail car eventually but inevitably arrives, a useful barometer to understand how much work – or how little – McLaren will need to do.

Let’s talk about speed to begin with. Both of these cars have over 700bhp, and both, of course, use the modern pragmatism of a twin-turbo V8 to muster that extraordinary number. It’s a recipe that replaces the romance and theatre of naturally aspirated engines such as the old 458 Speciale’s screaming V8, substituting in its place vicious effectiveness. Here, as in a number of other ways, the Pista turns your preconceptions on their head. While its smoother baritone avoids the McLaren’s gravelly crudeness at idle, there’s arguably even less texture and melody to its note once under way; at least the 720’s exhaust has that hollow, almost mournful bark along with the ghostly whoosh of its mighty turbochargers, not that the McLaren’s occupants get to hear much of it over the valve gear thrash and slipstream rush.

But it’s the way in which these two deliver those towering numbers where their characters begin to diverge. We’ve said it before, but it can never be overstated, frankly, that the Pista’s engine sets a new standard for turbocharged performance motors. The Pista might not possess the scythe-sharp snappiness of a Speciale, but the way it bolts forward in any gear, accompanied by that unnerving hiss from over your shoulder, has to be experienced to be believed. I simply can’t imagine how those wizards at Maranello have achieved it, but any time, any gear, any speed, the Pista wants to rip the horizon in through the windscreen.

Conditions are pleasant – the ambient Celsius just shy of double figures today, the road surface free of any moisture – yet the Pista is the kind of car that can lose traction at the rear wheels, in a straight line, even as a full-bore acceleration run reaches third gear. Just think about that for a moment: try to picture the abject fury that exists within the Pista’s exposed engine bay. It is a very intimidating car, especially so in the wet, as John and I can attest from prior experience.

So you probably won’t believe me when I say the 720S feels even quicker, but it does. Not in terms of how it enables the 720S to traverse a road, for the M840 unit is nothing like as sophisticated in its manners and response as the Pista motor. But in terms of all-out firepower it’s even more explosive.

None of us on this test ever quite comes to terms with how ferociously rapid this 720S is. Lighting its fuse makes me think of General Chuck Yeager’s Bell X-1 lazily dropping from the belly of a lumbering B-29 bomber, its rocket suddenly igniting and moments later it streaking far ahead across a blue desert sky, literally like an orange rocket, to exceed the speed of sound for the first time. The 720S – this 720S – is that similarly coloured rocket. If you told me it had a Senna-rivalling 789bhp I wouldn’t flinch; 800bhp-plus seems entirely plausible. The way it accelerates between 6000 and 8000rpm is too violent for you to even glance at the instrumentation – your eyeballs need to be glued to the vanishing point, eyebrows retreating over your forehead in a cartoon gale.

For demolishing a challenging road in a supersonic, antisocially rapid manner, there are few cars on earth quite as brutally effective as a 488 Pista. The steering is so quick that you don’t so much feed it into a corner as just squeeze the wheel’s rim, the yellow nose locking on to your chosen cornering line. That bit between two states, the fractions of time where something’s happening, slack even, just doesn’t exist in the Pista, and the same could be said of its ‘shotgun strategy’ gearchanges, which are virtually instantaneous. But of course, in road driving it’s those fleeting transient moments, those bits in between rather than tenths saved, where often so much pleasure from driving can be cultivated, and in the Pista they are seemingly relegated as an unfortunate by-product. Instead it offers iron control, brilliant poise and body control (albeit more conventional in feel than that of the exotically suspended McLaren), and a mastery of electronics that reaches its peak with the dubious-sounding Ferrari Dynamic Enhancer, which isn’t something you buy from the Ferrari store in small sachets, but which allows you to slide this 710bhp monster around with the reassurance you won’t spin off the road to expensive oblivion.

The 488 Pista wants to be driven hard, all the time; it demands to be driven in a certain way, and it has no truck with anyone or anything that attempts to divert it from its sole purpose in life, which is getting around a lap or from point A to point B as quickly as possible. After the disappointment of the car on eCoty 2018, this is the third occasion I’ve spent time with one, and my admiration and affection for it continues to steadily but relentlessy grow with that ongoing exposure. It’s a cool, distant, sometimes aloof character, but over time your bond with it and faith in it grow until they have the strength of reinforced concrete, however unlikely that may seem on first acquaintance. If I had the means to partake in trackdays at places like Spa, the Ring and Monza, I think it would be a very wonderful thing indeed. But for a Sunday morning drive on the B660? Nah, no thanks.

Perversely, that’s where the 720S claws back some ground. As more of an all-rounder it is predictably more desirable as an everyday and long-distance companion, making short work of the slog home from the Scottish Borders, apart from notably bad wind noise on this example. It’s a car that has received criticism for not providing enough supercar drama, but it is intrinsically more of an event than the Pista, from the moment the door hinges up and out, and the way you drop down into the brilliant bucket seat (it shames the one in the Ferrari), to the incredible view out and the supine, Formula 1-esque driving position (the Pista feels very upright and sedate in comparison).

The initial impression of the McLaren is that it gives you a lot more back than the Pista. Its steering has much more feedback, with borderline too much kickback over rough sections of road depending on your taste for such things. The Proactive Chassis Control II gives it an organic, deft way of traversing a challenging road, and the more you get into the car’s character, the more you separate off its volcanic thrust and just concentrate on the driving, the more you feel yourself drawn into the 720’s immersive driving experience. And all of that holds until about eight-tenths effort, whereupon something remarkable happens, and the Ferrari and McLaren swap places. Push the 720S really hard and that writhing, hydraulically assisted steering that had seemed so reliable, so informative, suddenly goes mute, a touch vague around 45 degrees of lock; the motions of the body become less easy to read than the more conventional Ferrari’s; the dead zone at the top of the 720’s brake pedal travel is now a barrier to confidence; and the over-the-limit behaviour with the McLaren’s open differential is nothing like as predictable as the Pista’s balletic, electronically enhanced oversteer. Once we learn the Pista, none of us is as comfortable trying to push the 720S to compete. It always feels like the one you could really get yourself in trouble with.

So this result is not a surprise: the hardcore Ferrari is better at being, er, hardcore, and the all-rounder of a supercar that is the 720S is better at being, um, and all-rounder. What is interesting is that from such similar starting points these are still cars of markedly different character and ability, and that there are obvious areas where McLaren will need to work tirelessly if it’s to produce a Longtail rival that can out-Pista a Pista in its preferred environment. But faster? No, Woking, that’s the one thing it really doesn’t need to be.