Formula 1’s standing in  America is hit badly when just six of the 20 entered cars take the start for the 2005 United States Grand Prix at Indianapolis. 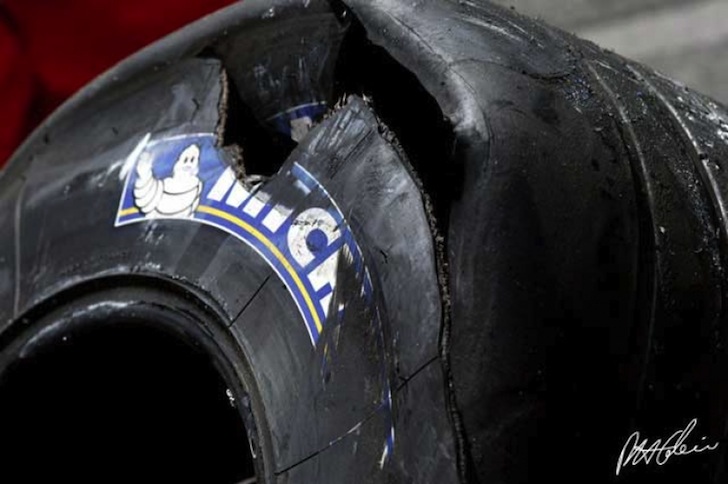 The thoughts of every Formula 1 fans voiced by ITV commentator Martin Brundle at the farcical 2005 United States Grand Prix, in which only six of the 20 cars took the green flag at Indianapolis.

Problems ahead of the race began during Friday practice when Ralf Schumacher’s Toyota TF105 slammed heavily into the concrete barrier at turn 13, an issue caused by the Michelin compound proving too unstable to take the high G-forces. Unorthodox measures, including placing a temporary chicane at turn 13 was black-balled by Ferrari, one of only three teams on the grid running Bridgestones. With driver safety on a knife-edge, 14 F1 cars rolled onto pitroad after just one warm up to the disbelief of the paying public.

Deciding against their ‘photo finish’ that had landed the duo in hot water in 2002, Michael Schumacher led Ferrari teammate Rubens Barrichello across the line to secure – amazingly – his only victory of the 2005 campaign. An understandably chuffed Tiago Monteiro crossed the line in the ill-performing Jordan EJ15 to secure the first podium of his F1 career. A shame few of the 117,000-strong crowd stuck around to watch the celebrations.

A nail-biting race at the Circuit of the Amercias on F1’s return to the US in 2012 left many heaving a huge sigh of relief.