Ten years ago, Fernando Alonso takes his debut Formula 1 victory for Renault at the Hungaroring, making him (at the time) the youngest Grand Prix winner ever. 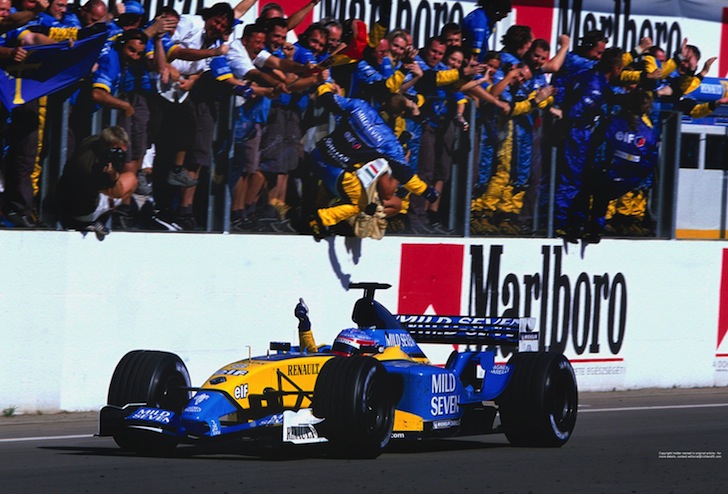 News has emerged that the Austrian Grand Prix could return to the Formula 1 calendar in 2014. Few will ever forget the fallout of the 2002 Austrian Grand Prix and THAT Ferrari team orders incident, nor for that matter Michael Schumacher taking victory the following year despite his F2003-GA catching alight in the pitlane.

Compared with his 2002 campaign, 2003 was not the great German’s easiest of seasons (though he still pipped McLaren’s Kimi Raikkonen and Williams’ Juan Pablo Montoya for the title). Indeed, the Hungarian Grand Prix was one of Schumacher’s disappointing races of the season, qualifying as he did in eighth and failing to improve during the race. For Fernando Alonso however, the 2003 Hungarian Grand Prix got the ball rolling on an illustrious career.

Aided by Michelin’s performance advantage over rival Bridgestone, the Spaniard took pole position by almost three-tenths of a second over the faster Williams FW25, leaping into a lead of 21s in just 13 laps ahead of Jaguar’s Mark Webber and leading all but one lap. It was a dominant performance from F1’s youngest race winner ever (Bruce McLaren’s 43-year record finally beaten), and made all the sweeter by his lapping both Schumacher and Renault teammate Jarno Trulli in seventh. Second and third for Raikkonen and Montoya reduced their deficit in the championship battle to one and two points respectively.

Renowned for its processional style races, the Hungaroring was momentous for two further reasons in 2003. Ralph Firman suffered an enormous accident in free practice that side-lined him for two races, reserve driver Zsolt Baumgartner hopping into the Jordan race seat for his F1 debut on home turf. The big attention grabber however was Rubens Barrichello, the left rear suspension of his Ferrari F2003-GA exploding at the end of the newly lengthened main straight and pitching the Brazilian heavily into the tyre wall. Given his inadvertent involvement in the accident that almost killed Felipe Massa at the same circuit in 2009, Barrichello’s heavy accident in 2003 is almost ironic.