Grand Prix. The Formula 1 Championship Single-seaters. A day at the Enzo Ferrari Museum in Modena, Italy. 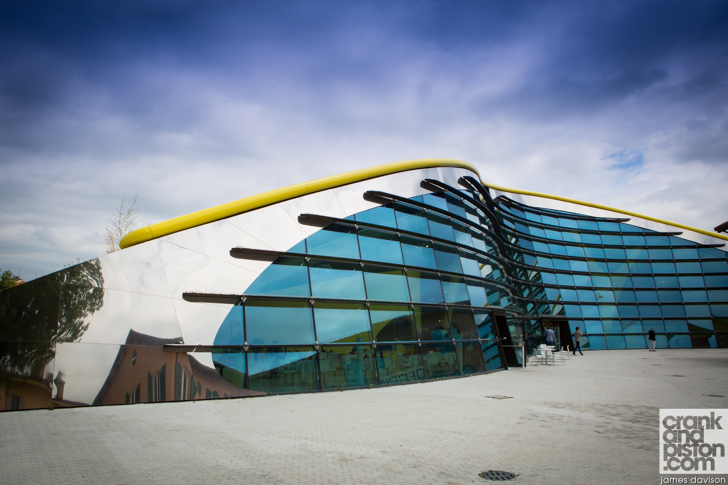 The Enzo Ferrari Museum sits on the grounds of its namesake’s birthplace in the heart of Modena. A new exhibition gallery within the complex – opened in 2012 – houses themed displays which combine a narrative of design, technology and automotive history told through the medium of cars and memorabilia. The theme changes every six months and on our crankandpiston visit to the Enzo Ferrari Museum, the theme is; Grand Prix. The Formula 1 Championship Single-seaters. Fan-bloody-tastic! 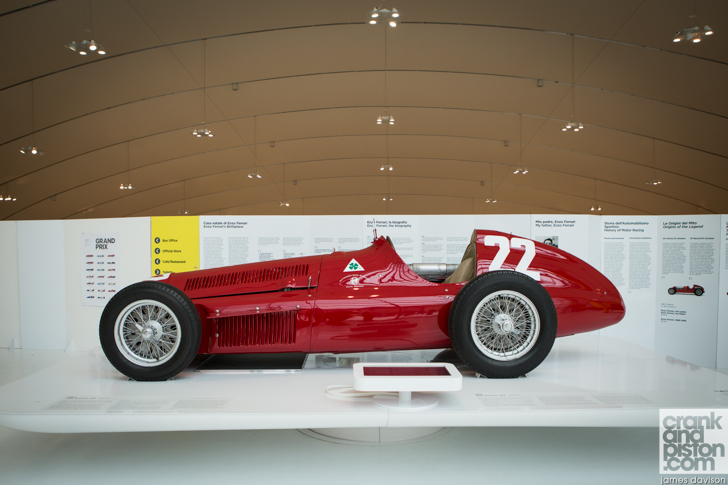 The Alfa Romeo 159 – a derivative of the 158 – produced 425bhp from its straight-eight, two-stage supercharged 1500cc engine which was enough to propel one Juan Manuel Fangio to his first Formula 1 Championship victory in 1951. Combined, the Alfa Romeo 158/159 ‘Alfetta’ – Italian for Little Alfa – is one of the most successful race cars in history taking 47 wins from 54 Grand Prix entered. Race car royalty indeed. 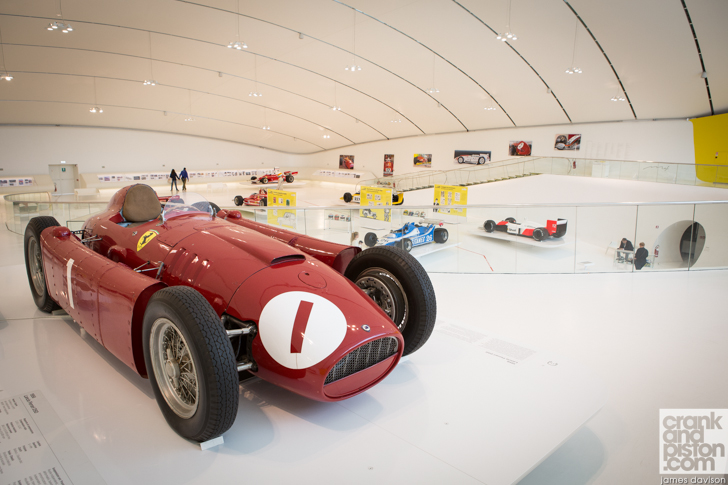 Traveling further in to the gallery proper, a 1954 Mercedes-Benz W196 ‘Type Monza’ continues the Juan Manuel Fangio connection. Fangio piloted one of these in the 1954 season and, again, took the Formula 1 title that year. Beside it sits a 1956 Lancia-Ferrari D50 with its distinctive side-mounted fuel tanks and – you guessed it – Fangio raced a D50 in the 1956 season and, yes, he did. Again. 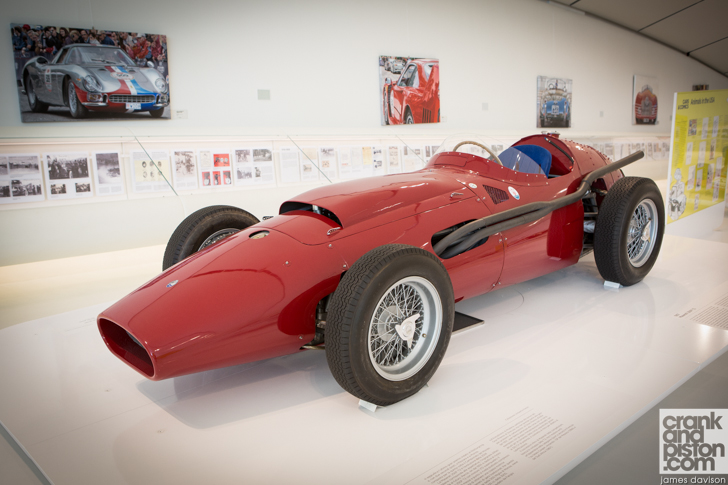 A 1957 Maserati 250F T2 – one of the most iconic Maserati race cars of all time – completes my Fangio fan boy obsession. Fangio returned to Maserati for the 1957 season and took the Formula 1 Championship for a fifth and final time. HIs last race in the 250F was the the last time he would win a Grand Prix and he did it in style at the Nürburgring. Widely regarded as the greatest race in F1 history, Fangio came from almost 50 seconds behind, breaking the lap record time and time again before passing the leader – Mike Hawthorn – and taking the checkered flag by over three seconds. 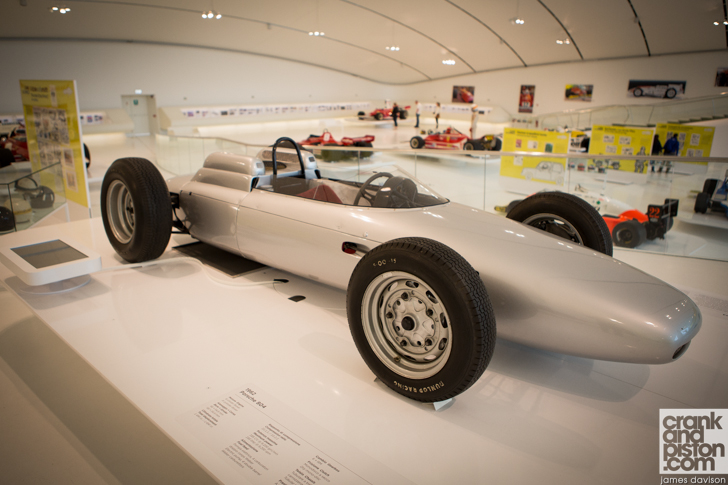 Something I wasn’t expecting to see was a 1962 Porsche 804. The flat-eight powered 804 gave Porsche their only championship race win as a Formula 1 constructor – with Dan Gurney doing wheel duty – at the 1962 French Grand Prix. A 1967 Cooper Maserati T81 – Cooper monocoque chassis/Maserati engine – completes the era before we hit the big wing wonders of the ’70s. 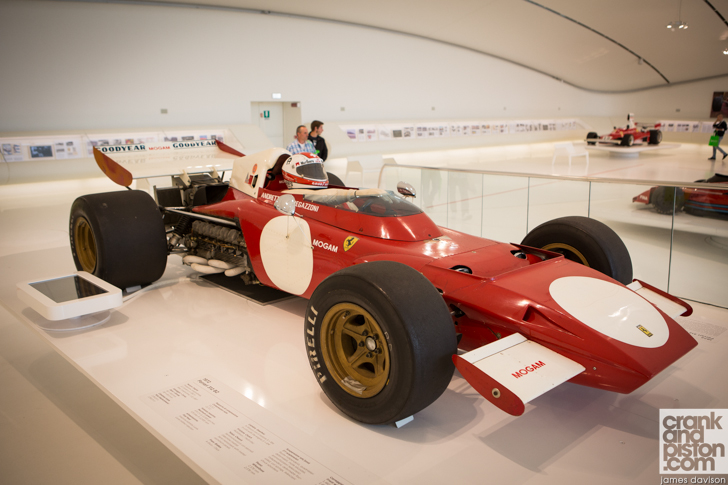 Although only a few years separate these single-seaters, technology advancement and a greater understanding of aerodynamics made a massive impact on car design. Even by 1972, the Ferrari 312 B2 – raced by Jacky Ickx, Clay Regazzoni, Mario Andretti and Arturo Merzario – had already taken on a shape that today’s Formula 1 aficionados would recognize. 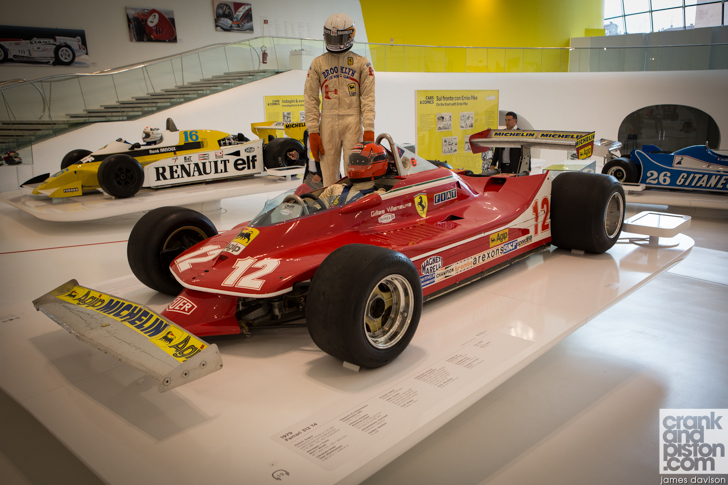 Gilles Villeneuve racing his Ferrari 312 T4 against the Renault  RS14 of René Arnoux in a duel for second place – at the 1979 French Grand Prix in Dijon – is one of the most exciting moments in televised Formula 1 history. Trading places continually over the last few laps, it was an F1 dogfight of massive proportions that saw the Ferrari driver get the better of his opponent. A rare opportunity to see both these cars side-by-side, although, now that I look at them the Ferrari seems to be just in front and a little sideways. Great attention to detail from the Enzo Ferrari Museum. 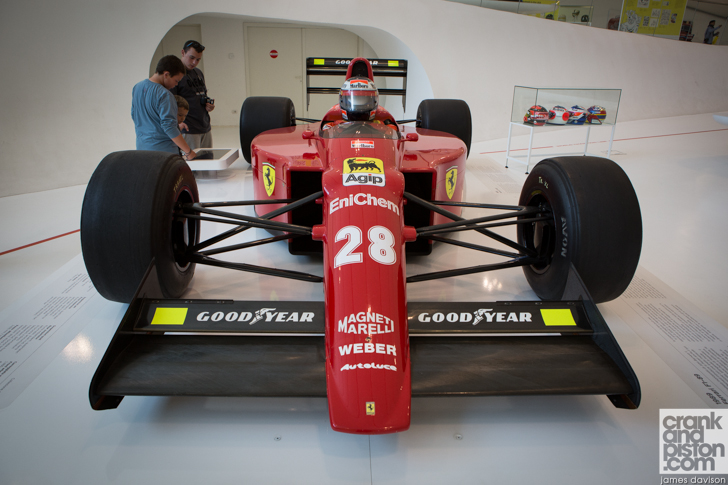 The 1988 McLaren-Honda MP4/4 and 1989 Ferrari F1-89 are the youngest cars on display. This was the era that introduced me to Formula 1. This was the era of Ayrton Senna, Alain Prost, Gerhard Berger, Nigel Mansell, Nelson Piquet and a long list of other drivers that captivated my imagination and had me glued to the television every Sunday. 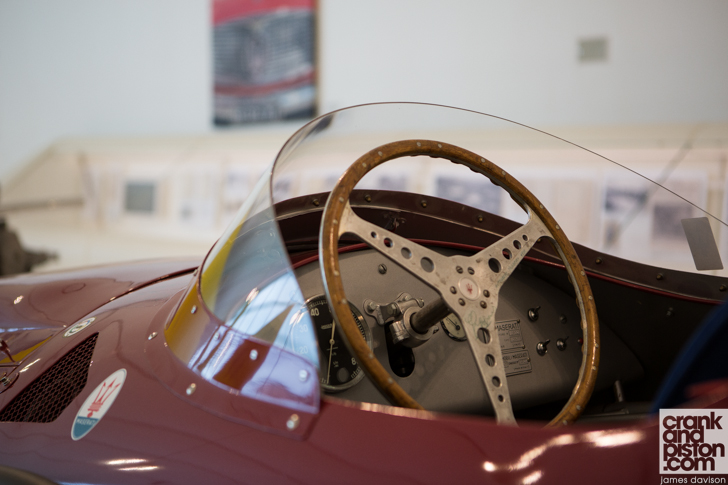 However, it is the single-seaters from El Maestro’s era that have impacted on me the most and I spend my last few moments in the Enzo Ferrari Museum just staring at these simple, bare-bones and beautiful nostalgic racers.

Fangio was – and always will be – Boss.

Previous ArticleWhy I can’t wait for cars that drive themselves
Next Article Hello Porsche Macan. Off-road in Dubai